View of the Troubles from a teenager’s room: Belfast Days: A 1972 Teenage Diary

Review: The diary powerfully and touchingly conveys the destructive impact of war on adolescents 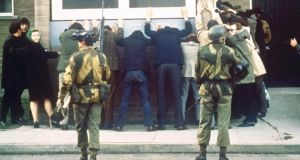 A few years ago, in an old briefcase in her spare room, the journalist Eimear O’Callaghan came across her diary from 1972. It fell open at an entry from May that read: “Came to bed convinced that prayer is our only hope, seeing we haven’t got a gun!”

She was startled to find that as a “skinny, timid” Catholic 16-year-old she was of the view that prayer was, as she drily puts it in her prologue to this book, her family’s “second-best option for survival”.

But when you read the diary you understand. This was the middle of what would turn out to be the most violent year of the conflict in Northern Ireland. That year 467 people were killed, most of them civilians. The violence was at its worst in Catholic west Belfast, where the O’Callaghan family lived, albeit on a relatively sheltered middle-class avenue. The teenage O’Callaghan had descended into a pathological terror from which she had not, by the end of that terrible year, emerged.

By January 1972 it was six months since Brian Faulkner, the prime minister of Northern Ireland, had declared that the state was “at war with the terrorist”, meaning the IRA.

He had introduced internment, which in practice meant the imprisonment of many Catholics, most of whom had nothing to do with the IRA, which responded by intensifying its campaign of violence. O’Callaghan describes the solitary hours she spent in her bedroom writing the diary, as well as painstakingly pasting newspaper cuttings into a scrapbook she named Happy Days. There is a sense that she, too, was a kind of prisoner.

O’Callaghan’s father was a major influence. Both parents were in the SDLP, and her father was a member of the Citizens Defence Committee, which campaigned for civil rights and documented nationalist grievances. He encouraged his children to keep up with the news and often had young Eimear help him put together dossiers on sectarian murders of Catholics by loyalists and of British army abuses. She helped him with material he gave to the late Mary Holland, one of the first journalists to report seriously on the North in the British press. One diary entry reads: “Brilliant pictures of army brutality on TV.”

Early in the year she commented that a particular day had been boring – “Three explosions today, no one seriously injured” – and, indeed, wished that “something big would hurry up and happen soon”.

When Bloody Sunday happened, a few days later, she was ashamed of having written this. The Derry massacre devastated her. She listened to the funerals on the radio, “weeping continuously”. West Belfast erupted in rage. In the riots that followed many local facilities were burned down, including the record shop where, days before, she had bought her first single, Congregation’s Softly Whispering I Love You. She records her shock on hearing the loyalist John McKeague say on television that Bloody Sunday was “Good Sunday”.

The diary viscerally evokes the sights, smells and sounds of the conflict: falling asleep to gun battles, getting woken up in the morning by bomb blasts, the acrid smoke of bomb sites, tear gas in the air, the eerie darkness when streetlights were out. She described having to walk in freezing wind and rain to school because the buses were off, and how girls who had to cross mixed or Protestant areas were permitted not to wear school coats for fear of attack. The nuns who ran the school didn’t talk about the conflict and made no allowances, drilling it into the girls that what mattered was getting their education.

O’Callaghan pasted paper butterflies on the cover, but the cuttings in her scrapbook are shocking. One page, reproduced as an illustration, includes the headlines: “Four men dead when car blows up”; “Two men die in explosion”; “Two Derry policemen shot dead”; “Torture by army is banned”.

The book includes photographs of some of the events to which the young diarist was reacting: the ruins of the Abercorn Restaurant after Bloody Friday, a barricade manned by masked loyalists.

She became, throughout the year, obsessed by the fear that the threatened “loyalist backlash” would be unleashed and that no Catholics would be spared. She describes breaking down when sectarian murders happened near her home. She lay awake in terror when her parents were out, dreading that they would be killed. She and other members of the family had brushes with death on several occasions.

The book has its problems. Inevitably, it can read like an endless litany of dreadful events, and O’Callaghan admits she is sometimes embarrassed by her tone.

She was pious and conventional, a dutiful daughter, and never rebellious. She disapproves of wilder teenagers. On a trip to France she huddles on the beach because she is embarrassed to go into the sea, misses her mother’s apple pies, and refuses to go on a motorbike ride with a handsome boy she likes because she is tired.

The commentary with which she breaks up the diary entries is not always interesting or necessary. O’Callaghan rightly praises the way her parents, like so many others, did their best for their children under appalling circumstances, but you sometimes wonder if they might have spared the children just a little. Letters from home during the French trip updated her on sectarian atrocities, and family jaunts were as likely to be to see the internment camp, or the aftermath of some atrocity, as to visit relations in Carlingford.

The diary powerfully and touchingly conveys the destructive impact of war on adolescents. (Suicide rates are rising among Northerners of O’Callaghan’s generation.) O’Callaghan writes of how she feels grateful to have survived and for the peaceful normality of her children’s lives. She has made an important contribution to the documentary record of the conflict.