Us by David Nicholls: Witty tale of a father’s journey of self-discovery

The follow-up to One Day is a portrait of a family break-up on a modern-day Grand Tour of Europe. It's well worth the trip, but it’s not the holiday of a lifetime 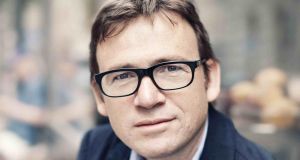 The loveable underdog has been a fixture in David Nicholls’s fiction from the ambitious student Brian Jackson in his debut Starter for Ten, to the frustrated actor Stephen C McQueen in The Understudy and the lovelorn Emma in his very moving bestseller One Day.

It’s a formula that has proven hugely successful, with two of his novels being made into films. There is nothing cynical or clinical about Nicholls’ writing, though. It is warmhearted enough to make his characters come alive and make readers care; clearsightedly intelligent and witty enough to make them nod and smile.

His screenwriting credits also include Cold Feet and an adaptation of Blake Morrison’s memoir And When Did You Last See Your Father?, whose study of a boorish GP who fails to appreciate his writer son’s artistic temperament finds a strong echo in Nicholls’s latest novel, Us.

The underdog in Us is the not so loveable Douglas Petersen, the emotionally stunted son of an unfeeling doctor, whose relationship with his wife Connie is so strained that she announces that she wants to leave him on the eve of their last family holiday before their son Albie leaves for university.

“I was looking forward to us growing old together,” replies Douglas. “Me and you, growing old and dying together.” Connie’s reply captures Nicholls’s concise wit. “Douglas, who in their right mind would look forward to that?”

Douglas seeks our sympathy for his damaged relationship with Albie, “to whom I am devoted but who sometimes regards me with a pure and concentrated disdain, filling me with so much sadness and regret that I can barely speak”. We soon learn, however, that Douglas is far from blameless, as flawed a father and husband as he is unreliable as a narrator, not just uptight but bad-tempered too. He wants to teach his son that not everything in life is easy or fun, he says. “You certainly are,” Connie bitterly replies. He tries to instil a fear of the future in his son, to get him to reject art as for amateurs in favour of science, which is harder and therefore better, he argues. This verges on caricature.

The family holiday, a modern grand tour of Europe, gives the novel its structure and Nicholls the chance to sketch sharp and entertaining postcard portraits, such as Amsterdam – “the trendy dad of European cities; an architect perhaps ... barefoot and unshaven” – and Munich, a strange combination of the “grandly ceremonial and boisterously beery”.

Each section of Us begins with a telling literary quotation, appropriately enough, as Nicholls is himself a supremely quotable writer – witty, intelligent, observant and empathetic. On his mother’s death, Douglas reflects: “perhaps grief is as much regret for what we never had as sorrow for what we had lost”. Alarmed to see Albie packing his guitar, Douglas says: “I’m worried he’s going to busk”.

Douglas is a scientist, Connie an artist and as he runs the gauntlet of contemporary dance and theatre, “a funereal form of television, their courtship takes the form of not just “a cultural education, it was also a form of audition”.

Connie is on the rebound when they meet and is also swept away by his passion for science, an emotional bond that he will unthinkingly and unilaterally break by ditching poorly-paid academia for morally compromised work with a multinational, prioritising being a provider at the price of his idealism. The sympathy we feel for this awkward character punching above his weight with a beautiful if wayward wife dissipates as we witness him punch below the belt, highhandedly making decisions that affect his family and dismissing his son’s creativity and individuality.

It is a painful portrayal of a disintegrating marriage, where “arguments, like colds and hangovers, took an age to shake off”, but you wonder why, having had the luck to find Connie, he fails to learn from her, to grow under her influence, become more like her. He sees himself as the safe pair of hands, who helped a party girl who danced on tables a hand down to the floor, but fails to appreciate and benefit from the escape route she gave him out of social isolation. For Douglas, “emotional inteligence” is “the perfect oxymoron”; for Connie, it is simply empathy. Early on in their relationship, he sides with Connie aganst his father, a moment of growth, but later in the novel (unsubtly) he will side with arms dealers against his son, a calamitous regression.

Having a child has accentuated the differences between Connie and Douglas. For her, a child was an unopenedflower to be given light and water but also to be enjoyed. For him, it should be bracketed to a bamboo stick, pruned and hothoused.

Douglas is too much of a stock character, the fall guy, the straight man, who lives by maps and guidebooks and misses the spontaneity of life. For him, life is a controlled experiment; for Connie it is a work in progress. Ironically, my sense of this book is that it is so tightly plotted, so carefully scripted that the thrill of feeling that anything could happen is missing. There is also perhaps too much emphasis on humour to take the whole thing seriously enough, to fully emotionally engage. It is well worth the trip, but it’s not the holiday of a lifetime. Martin Doyle is Assistant Literary Editor

The Goop Lab: One episode is about the vulva. I’ll probably watch that with my parents
5 Welcome to the child sex capital of Europe
Real news has value SUBSCRIBE