Together, Closer review: Why we are a mystery to ourselves

Giovanni Frazzetto creates his own art – eight stories that run alongside the latest discoveries of neuroscience, exploring humanity’s relationship with connection 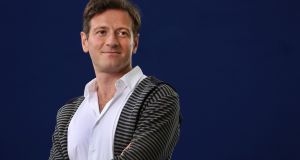 Giovanni Frazzetto, neuroscientist, and author of ‘Together. Closer: Stories of Inimacy in Friendship, Love and Family’. Photograph: Jeremy Sutton-Hibbert/Getty Images

Book Title:
together, closer: The Art and Science of Intimacy in Friendship, Love, and Family

Together, closer: The Art and Science of Intimacy in Friendship, Love, and Family is an ambitious project. Giovanni Frazzetto marries science with art, the most recent discoveries of neuroscience with human stories about intimacy.

Stories are part of our make-up and they have always been with us because we need them to explain who we are. They come in many forms – folk tales, parables, riddles, myth, the best of them acting as shafts into the unconscious, exactly expressing human psychology long before Freud. In fact, when Freud was credited with discovering the unconscious, he insisted that he was in debt to the writers and philosophers that preceded him.

Giovanni Frazzetto is a molecular biologist and author of the acclaimed Joy, Guilt, Anger, Love. Its subtitle, What Neuroscience Can and Can’t Tell Us about How We Feel, was the springboard for a similar exploration and acknowledgment of how the “endless wonder” of neuroscience “cannot cover the breadth of a single emotion”. Acknowledging that we are a mystery to ourselves, Frazetto explored art, philosophy history and personal anecdote alongside the latest scientific research. Emotions are the most slippery of customers to pin down and Frazetto showed how art can help – for instance how a reaction to a Caravaggio painting can be an exploration of deep guilt.

Frazzetto goes one step further in Together, Closer and creates his own art – eight stories that run alongside the latest discoveries of neuroscience, exploring humanity’s complicated relationship with connection. “Only Connect,” said EM Forster, proving that the poets and writers have been here before, as Franzetti acknowledges. And any story worth its salt deals with connections and disconnections whether it is Cinderella or Wuthering Heights.

Eight scenarios are explored, including Vanessa and Ryan, caught up in addictive affair while married to other people; Margaret, who needs to help her father die; as well as Scott and Liam, whose unequal relationship is rather eerily expressed by Scott’s interest in Liam’s laboratory experiments.

Scott was fascinated by Liam’s experiments or what he understood of them. Every morning Liam killed a rat, made himself a cup of coffee, then trained other rats to interpret warnings of danger. He made it sound like he was commander in chief, with the animals obeying his orders. They feared and then learned not to fear. Scott kind of obeyed Liam too, “You are king,” he used to tell him.

Scott’s powerlessness shows us how one can be even lonelier within certain relationships. Frazzetto’s central theme is loneliness and it is not surprising that he’s chosen the short story which according to Frank O’Connor in his book The Lonely Story, is the province of the lonely submerged population group. Yet Frazzetto’s prologue comes down firmly on the side of connection as he invites us to reflect:

As waves cling to the shore, so we are inclined to attach . . . Loneliness can kill, whereas togetherness revives. We live in a world where it is much easier to find isolation than companionship. Yet meaningful relationships are the most nurturing ingredient for our happiness.

The opening story Shidduch tells the story of a lonely artist called Anita who invents an imaginary boyfriend, not only for herself but for her anxious mother too. The story has potential for some age-old comedic Shakespearean misunderstanding yet the science seems to get in the way. We never really get a sense of who Anita is and when she decides that she needs to “let go of the illusion” after her parents’ visit, that ending doesn’t feel like it’s been earned. The short story is an exacting literary form which shines in its ability to show rather than tell. The science doesn’t always give the room for that. When Anita is intolerant of her “parents harping”, we need to see it, hear it but at that point the narrative switches to talk of fruit flies and laboratory rats, and mice separated from their parents at birth as well as the descriptions of Harlow’s famous cruel experiments on baby monkeys.

Despite the uneasy mix, a clear love of art and science shines from the book. When Anita writes “Loneliness Kills” in her notebook, we sense her creator’s overwhelming desire to combat the changes in our overcrowded human world where loneliness is now acknowledged as a “world epidemic”.

Martina Evans is a poet and novelist. Her latest book is “The Windows of Graceland, New and Selected Poems” is published by Carcanet.