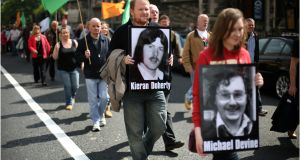 February 5th: In a statement republican prisoners warned there could be further hunger strikes unless they were awarded special category status by the British government.

March 2nd: Republican prisoners call off the blanket and no wash protests as to not detract attention away from the hunger strike.

March 3rd: Then Secretary of State Humphrey Atkins reads a statement in the House of Commons reiterating their would be no political status for the prisoners, hunger strike or not.

March 26th: Sands was nominated as a candidate for the by-election in Fermanagh/South Tyrone. Other nationalist candidates will withdraw their applications for candidacy in the following days.

April 20th: Three TDs visit Sands in the prison, after which the TDs called for urgent talks with the British government.

April 21st: At a press conference in Saudi Arabia, prime minister Margaret Thatcher declared the British government would not meet the three TDs. Further, she stated: “We are not prepared to consider special category status for certain groups of people serving sentences for crime. Crime is crime is crime, it is not political.”

April 28th: A private secretary of Pope John Paul II, Fr John Magee (later Bishop of Cloyne), visited Sands in prison to ask him to end his strike. The next day, Magee met Humphrey Atkins in an effort to create negotiations between the British government and the hunger strikers, before seeing Sands again. Magee also gave Sands a gold cross as a gift from the Pope.

May 4th: European Commission on Human Rights announced it had no power to proceed with the case brought by Marcella Sands against the British government.

May 5th: Bobby Sands died after 66 days on hunger strike. He was 27 years old.

May 7th: An estimated 100,000 people attended Sands’ funeral in Belfast.

May 12th: Francis Hughes died after 59 days on hunger strike. He was 25 years old.

May 21st: Raymond McCreesh and Patsy O’Hara died after 61 days on hunger strike. They were 24 and 23 years old respectively. Cardinal Tomás Ó Fiaich, the Catholic Primate of All Ireland, criticised the British government’s attitude toward the strike.

May 26th: McLaughlin, who had joined the strike 12 days before, is taken off the strike after he experiences internal bleeding.

May 28th: Martin Hurson joined the hunger strike to replace McLaughlin. Thatcher visited Northern Ireland and called the strike the “last card” of the IRA.

May 29th: The names of four hunger strikers, as well as five other republican prisoners, were put forward as candidates in the Irish general election.

June 3rd: The Irish Commission for Justice and Peace (ICJP) issued a statement on the hunger strike. The organisation, established by the Catholic Bishops’ Conference, asked for improvements in the prisons but denied political status.

June 11th: Ireland held a general election. Hunger striker Kieran Doherty was elected as an Anti H-Block TD for Cavan–Monaghan, and fellow prisoner Paddy Agnew was elected in Louth, ddenying Charles Haughey the chance to form a government, and enabling Fine Gael and Labour to form a government with Garret FitzGerald as taoiseach. The following day the British government published proposals to change the Representation of the People Act, disallowing prisoners to stand as candidates in elections.

June 29th: Laurence McKeown joined the hunger strike. The following day the British government released a statement declaring once again that it would not grant special category status to republican prisoners.

July 5th: A deal was possibly on the table between Sinn Féin and the British government, giving the hunger strikers most of their demands. Sinn Féin rejected this deal. However, this is contested. Controversy surrounds this event, as some republicans claimed to have a document from the British government setting out proposals to meet many of these demands.

July 10th: Funeral of Joe McDonnell took place. The British government moved to arrest an IRA firing party at the funeral and seized a number of weapons. Rioting ensued.

July 15th: Secretary of state Humphrey Atkins announced that the British government had invited representatives of the International Committee of the Red Cross to review prison conditions in Northern Ireland. Over the following days the representatives toured the prisons and met Atkins. The hunger strikers rejected attempts by the Red Cross to act as mediators between them and the British government.

July 18th: Clashes with republican demonstrators and gardaí following a demonstration outside the British embassy in Dublin. An estimated 200 people were injured.

July 29th: Representatives of Sinn Féin and the Irish Republican Socialist Party (IRSP) visited the hunger strikers, with the political groups suggesting the hunger strikers suspend their efforts for three months to allow a review of prison reforms. The strikers rejected this idea.

July 31st: The parents of Paddy Quinn asked for medical intervention to stop their son’s strike.

August 8th: Thomas McElwee died after 62 days on hunger strike. He was 23 years old. The following day outside the prison riots continued and two Catholic men were shot dead.

August 20th: Michael Devine died after 60 days on hunger strike. He was 27 years old. Devine was the last prisoner to die as part of these protests. The family of Patrick McGeown agreed to medically intervene to save his life after 42 days on hunger strike. Owen Carron, Bobby Sands campaign manager for the Fermanagh-South Tyrone MP seat, won the by-election. A few days later Sinn Féin announced it would contest all Northern Irish elections in the future.

September 4th: The family of Matt Devlin asked to medically intervene to save his life after 52 days on hunger strike.

September 6th: The family of Lawrence McKeown asked to medically intervene to save his life after 70 days on hunger strike. The INLA announced it would no longer replace men on hunger strike at the same rate as before. John Pickering joined the strike the next day.

September 24th: Bernard Fox ended his strike on the 32nd day of his fast as his health deteriorated rapidly. Two days later, Liam McCloskey ended his strike on his 55th day after his family stated they would call for medical intervention to save him when he became unconscious.

The Sound and the Fury by William Faulkner: American Ulysses