Thomas MacGreevy and the Rise of the Irish Avant-Garde: Timely and succinct

Book Review: Francis Hutton-Williams has produced a valuable and coherent study of this fascinating period in Ireland 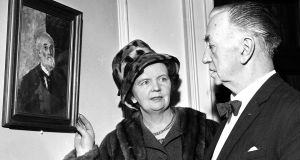 Thomas MacGreevy, a founder member of the Arts Council, and Nora Niland, the curator of the Sligo Museum, with a self-portrait in oils by John Butler Yeats. Photograph: Gordon Standing / The Irish Times

There is something perplexing about the fate of the poet, art curator and first World War veteran Kerry-born Thomas MacGreevy because as with several other poets of his generation, while his poems survive in various anthologies and studies of 20th century Irish poetry, they are generally unavailable in book form.

Since the 1991 edition of his Collected Poems, edited by Susan Schreibman, who also edited an important critical reappraisal, The Life and Work of Thomas MacGreevy in 2013, MacGreevy’s poems, like much of his published prose, can only be accessed through the library or second-hand. And yet his name and influence over 50 years since his death in 1967, remains front and central when the conditions, lifestyles and histories of a number of Irish poets, artists and intellectuals, loosely described as modernists, are brought into critical focus.

1 No obvious signs of injury on remains of McGinley children
2 Parents jailed over female genital mutilation of daughter
3 Ireland v Scotland: Doris’ day as Caelan set for first cap
4 The notorious Donald John Trump goes on trial
5 Man given suspended sentence for assaulting transgender escort
6 Hugh Wallace: The day I stopped drinking changed my life
7 ‘Wonderful boys’: McGinley children will be greatly missed, school says
8 Why our love for Leo is withering on the vine
9 Varadkar blames British ignorance of Ireland for Brexit impasse
10 Labour Party to consider introducing four-day week
11 Six Nations: Pundits, journalists and players have their say
12 Bespoke unit for ‘deeply disturbed’ woman would cost €1m, court told
13 Motorists urged to take care after snowfalls in west of Ireland
14 I’m Irish and I live abroad. Why have we been forgotten in Election 2020?
15 Ireland’s housing crisis in five revealing graphs
16 2020 bargain cars: What to buy with a limited budget in mind
17 Una Mullally: Those attacking Sinn Féin have become cheerleaders in reverse
18 Doctor struck off register for failing to keep up with professional competency
19 Frank McDonald: Housing policy a litany of failure
20 Kildare priest appointed new Catholic bishop in west of Ireland
21 Dancing with the Stars: Glenda Gilson sinks like Titanic
22 Kobe Bryant obituary: A transcendent, if enigmatic, superstar
23 ‘We serve neither Queen nor Commisar’: The birth of the Provisional IRA
24 Brexit is a collective English mental breakdown
25 Daughter insisted she did not ‘harm a hair’ on Patricia O’Connor’s head
26 My teenager can’t bear the sound of us chewing at dinner
27 Fintan O’Toole: The terms of Brexit hold a great irony
28 Comcast acquires Irish cloud-based telco Blueface
29 Mitchell O’Connor does not want drugs decriminalised ‘in our country ever’
30 Why are Fine Gael and Fianna Fáil refusing to go into coalition with Sinn Féin?
31 Bridgestone’s connected tyre could be a safety breakthrough
32 ‘It’s something you don’t want to hear. You always think it happens in other places’
33 Patient advocate on HSE board resigns in protest at ‘tokenistic’ treatment
34 Ryanair to pay portion of Peter Bellew’s legal costs, court rules
35 Aontú leader withdraws action seeking to halt RTÉ election debate
36 Man jailed for sexually assaulting woman with special needs
37 Auschwitz anniversary: ‘I probably saw 300,000 Jewish people perish right in front of me’
38 Money matters: ‘My father embarrassed us with his haggling’
39 Thomas Markle: My Story – ‘It’s time to look after Daddy’
40 Gonzaga shock Blackrock for historic Leinster Senior Cup win
Real news has value SUBSCRIBE