There are no rules: debut author Paraic O’Donnell’s advice to aspiring authors

When you break writing a novel down, a lot of ‘rules’ are just common sense, and others are there to be broken – so respect the reader but take liberties, allow yourself excesses 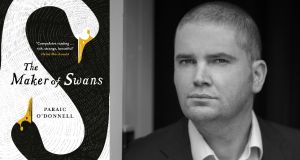 There is great art that dignifies the ordinary passages of our lives, great art whose workings are quiet and unceremonious, and I have nothing but respect for it. But we live other lives, each of us. There is something else, always, just beneath the skin of daylight. Don’t you feel it? There is a lifelong singing, a secret rhapsody, an elsewhere to which we also belong. We must honour that too, in our art. We must try to be true to it

When you publish a novel, there are certain questions that come up a lot.

What’s your book about? What advice do you have for aspiring writers?

In my case, at least, these questions have identical answers: there are no rules.

That sounds monstrously adolescent, I realise, but bear with me. I can explain. My book, without giving too much away, is about a young girl for whom there are no rules. As for advice, I don’t have any. In fact, there isn’t any, or none that matters. There are no rules.

I don’t mean that I’m special or exceptional. I’m just speaking from what little experience I have. And I did everything wrong, basically. Everything, right from the beginning.

It’s not as if I didn’t know any better. When you’re writing a book and trying to get it published, one of the first things you discover is that there’s no shortage of advice on the subject. There are lucid primers by reputable publishing professionals. There are candid and only gently chiding self-help manuals by veteran writers. There are impassioned but violently illiterate online screeds by – well, it can be hard to tell. Plus, I wasn’t really paying attention.

And there is a lot of this stuff. No, really. There is a corpus of received wisdom so gigantic that it would take many lifetimes to traverse it in its entirety. Luckily, you don’t have to. You can ignore it, all of it. There are no rules.

No, honestly. I did everything wrong. You’re not supposed to approach an agent until you’ve finished your novel. That one is practically a commandment. Well, I approached an agent before I’d even started a novel. I asked her to hang on for a bit while I wrote one, and it was fine. Granted, she didn’t like it when it was finished, but if I hadn’t put myself in such a spectacularly awkward predicament, I’m not sure I’d have produced a novel at all. And anyway, the next agent I showed it to did like it, so it all worked out in the end. No one died. There are no rules.

But, but, but. You’ve got to follow the submission guidelines. And your query letter has to be flawless. And it’s vital to format your manuscript correctly. And so on.

Look, here’s the thing. The query letter is just an email. You have to send it to the right person. You have to include the right information and write it clearly and so on. You know, like a competent adult. You don’t need rules for that. And yes, you do also have to write it in such a way that you don’t appear deranged or unpleasant, but you don’t need rules for that either. You just need not to be deranged or unpleasant.

The same goes for the manuscript. Are you good at writing? No, I mean, properly good, not ever-since-I-was-little good? And have you read lots of books? Well, you’ll be fine, then. You’ll know the sort of thing that happens in them, and what they’re supposed to look like, with the paragraphs and the dialogue and what-have-you. So, you know, just write one of those.

And by “write”, of course, I mean “type”. It’s not a Sumerian epic. You type the book like a normal person, you make sure there aren’t any spelling mistakes and you save it in the document format used by literally everyone alive. You don’t need rules for this stuff. Seriously. This is just what people do. There are no rules.

This applies to the writing too. In fact, this applies especially to the writing. Take Elmore Leonard’s oft-cited “rules”, for instance, which have now acquired something approaching the force of doctrine. It helps, of course, that these “rules” are themselves unshowy gems of aphorism: “Never open a book with weather”; “Try to leave out the part that readers tend to skip”. Nice. It’s not hard to see the appeal.

For the record, Elmore Leonard is a writer I revere. His “rules”, like everything he wrote, are a source of delight. What many people seem to miss, though, is that they aren’t rules at all. Leonard read widely, we may be sure, and in many genres. He knew better than most that any rule you care to formulate has any number of glorious exceptions. He even says as much, in the article in the New York Times which sets out his “rules”, but people don’t tend to quote those parts.

The point is, a writer of Leonard’s subtlety, humour and humility doesn’t take it upon himself to make unironic prescriptions for the entire literate world. His “rules” are a wry codification of his own style, nothing more. And that style, for all its miraculous grace and levity, is just that: Leonard’s style. There are no rules.

So, yes, I did things wrong. Sometimes, I admit, I did so on purpose, just to see what I could get away with. At the beginning of my book, a character is woken from a dream. (There’s a rule about that. You can look it up.) There are even gunshots. (They don’t “ring out”, though. Having no rules doesn’t mean having no taste.) I don’t know whether I did get away with it, but if I didn’t it was because of my own failings, not because I broke a rule.

I introduced elements of the fantastic in a work of literary fiction. In fact, I hardly left any out. I used alternating points of view (readers hate that), and switched between the past and the present tense (readers really hate that). I set the book in unnamed places, and interleaved two historical periods without identifying either of them. A pattern may be emerging here.

I tried very hard to create a satisfying story, but there were things I refused to explain because explaining them would have killed them. I worked with the utmost care, and with an unremitting consciousness of my duty to the reader. I wrote everything – every single line – over and over again, many hundreds of times, to get it closer, to get it as close I could. I tried.

But I took certain liberties too. I allowed myself certain excesses. I had no choice, not with this story. There is great art that dignifies the ordinary passages of our lives, great art whose workings are quiet and unceremonious, and I have nothing but respect for it. But we live other lives, each of us. There is something else, always, just beneath the skin of daylight. Don’t you feel it? There is a lifelong singing, a secret rhapsody, an elsewhere to which we also belong. We must honour that too, in our art. We must try to be true to it.

This is why I did everything wrong. This is why it was necessary. And I know how it sounds, believe me, but I can only explain it in this way. It was an act of love, this thing. It was a slow convulsion, an episode of rapture. When that comes, you obey it, and you obey nothing else. There are no rules.

The Maker of Swans by Paraic O’Donnell is published in trade paperback/ebook by Weidenfeld & Nicolson on February 11th, priced £13.99/£6.99. It will be reviewed in The Irish Times this Saturday