The world catches up with Stefan Zweig’s vision

The Austrian writer of the 1930s, a friend of James Joyce and inspiration for Wes Anderson, is back in vogue as his view of a world changing for the worse captures the zeitgeist 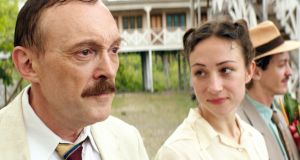 Josef Hader and Aenne Schwarz as Stefan Zweig and his second wife, Lotte, in Stefan Zweig: Farewell to Europe 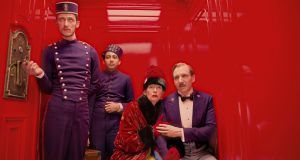 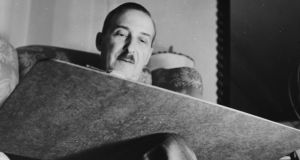 In The World of Yesterday, Stefan Zweig’s posthumous autobiographical saga of early 20th-century Europe, the writer defined himself as “an Austrian, a Jew, a writer, a humanist and a pacifist”.

Zweig, a worldwide bestselling author in the 1920s and 1930s, was all but forgotten in the English-speaking world until Wes Anderson’s 2014 film, The Grand Budapest Hotel, which won four Oscars.

Anderson had come across Zweig’s 1939 novel Beware of Pity, set in a Hungarian castle, and became entranced with his work. “Inspired by Stefan Zweig, ” reads the first credit at the end of the film.

The Grand Budapest Hotel is loosely based on two Zweig works, The Post Office Girl and Twenty-Four Hours in the Life of a Woman, which take place in grand Mitteleuropa surroundings.

The anonymous author who recounts the story of the charming, extravagant, bisexual hotel concierge Monsieur Gustave (played by Ralph Fiennes in the film) looks like Zweig.

The slapstick humour of Anderson’s film is not Zweig’s style, but the underlying philosophy is. As stated by Monsieur Gustave and later repeated by his protege bellboy and successor: “There are still faint glimmers of civilisation left in this barbarian slaughterhouse that was once known as humanity.”

For several years before The Grand Budapest Hotel, Pushkin Press in London and translator Anthea Bell took the lead in resuscitating Zweig’s oeuvre.

The film premiered at the Locarno Film Festival this month and is playing in cinemas in Germany and France. The Austrian actor Josef Hader captures Zweig’s melancholy humanity to perfection. In a touching scene, Zweig revels in the affection of Plucky, the fox terrier he received for his 60th birthday, less than three months before his suicide.

Fame is a burden, because Zweig is constantly solicited for lectures and interviews, and sought out by European Jews seeking help in escaping from fascism. At a Pen writers’ club meeting in Buenos Aires, he is under pressure to take a stronger stand against Hitler.

Zweig’s abhorrence of Nazism is evident, but the German language is his home, and he is taken aback by the virulence of writers at the conference. “The world of my own language sank and was lost to me,” he wrote in his February 1942 suicide note.

Zweig’s first wife, Friderike, brilliantly played by Barbara Sukowa, refused to follow him into exile. They divorced, and he married his young secretary, Lotte Altmann (Aenne Schwarz). Eventually, with Zweig’s help, Friderike, her daughters, sons-in-law and the family dog made their way to New York.

When the two wives meet for the first time, Lotte brings flowers to Friderike and addresses her as “Frau Zweig”. Friderike calls her usurper “Frau Zweig” too, with humour, then “Lotte”. The women embrace. Whatever pain the divorce and remarriage caused is erased by the magnitude of the cataclysm that has engulfed Europe.

During his last years in Petrópolis, a resort town above Rio de Janeiro, Zweig asks a former Berlin newspaper editor to play chess with him. After he and Lotte take a massive overdose of barbiturates, we see only a glimpse of their entwined bodies, in a mirror. The newspaper editor reads Zweig’s suicide note aloud.

In France, Zweig never went out of fashion. The chess game in Schrader’s film is an allusion to Chess Story (also known as The Royal Game), the last book Zweig published before his death. The story of a monarchist who teaches himself chess while imprisoned by Nazis has been translated at least six times in France, where it has sold more than a million copies.

Confusion of Feelings, about a young man’s ambiguous sexuality, has sold 400,000 copies in France. A few years ago, when Grasset published the hitherto unknown Journey into the Past, about lovers reunited after a nine-year separation, it sold more than 200,000 copies.

Two Paris theatres produced Zweig’s work this spring. The monologue stage adaptation of Zweig’s The World of Yesterday at the Théâtre des Mathurins was so successful that performances are scheduled to resume in September.

Zweig’s Francophilia helps to explain why he is so loved in France. In The World of Yesterday, he described his grief that a swastika was hoisted on the Eiffel Tower and storm troopers marched down the Champs-Élysées. “Few of my own misfortunes have dismayed me and filled me with despair as much as the humiliation of Paris,” he wrote. “My books had almost as many readers in France as in Germany; no one thought of me as a foreign writer, a stranger. I loved the people, I loved the country, I loved the city of Paris and was so familiar with it that every time my train came into the Gare du Nord I felt I was coming home.”

Zweig established friendships with most of the leading European writers, artists and musicians of his day. When he saw James Joyce sitting alone at the Café de l’Odéon, he was told the young man was English, a notion of which Joyce quickly disabused him. The two worked on the German translation of Portrait of the Artist as a Young Man. Zweig was “amazed” by Joyce’s “fantastic knowledge of languages”.

Joyce transformed his “resentment of Dublin, England and certain people” into “dynamic energy”, Zweig wrote. “I never saw him laugh, or look really cheerful. He always seemed like some dark, concentrated force, and when I met him in the street, with his narrow lips pressed firmly together . . . I sensed the defensive isolation of his nature even more strongly than in conversation.”

Zweig attributed his own success to his determination to cut extraneous detail from his texts. From observing the sculptor Auguste Rodin, he said he learned concentration, “the eternal secret of all great art”.

Short books and fast-moving plots certainly appeal to today’s readers, but are not enough to explain the present interest in Zweig’s work.

His sense of melancholy and nostalgia, of a world that is changing rapidly for the worse, is in sync with our time.

His description of war refugees, and their ill-treatment, is valid today: “They had climbed over the . . . mountains by night, or swum the river marking the border. Starving, ragged and distressed, they stared at us, and with them a panic flight from inhumanity had begun. Refugees were to spread over the whole earth . . .”

Zweig’s European dream predated the first World War. Ours followed the second. Europe was, he wrote, “the true home of my heart’s desire . . . I never hoped more for a united Europe; I never believed more in its future than at that time, when we thought there was a new dawn in sight.”

Zweig saw Europe tear itself apart twice: “Against my will, I have witnessed the most terrible defeat of reason and the most savage triumph of brutality in the chronicles of time.”

Nationalism was “the ultimate pestilence that has poisoned the flower of our European culture”, he wrote.

He did not live to see his European dream resurrected on the ruins of the second World War, only to falter again in throes of nationalism and for want of great leaders.