The story of Rowan Hamilton in 64 sonnets

An Irishwoman’s Diary: A sum of poetry and maths 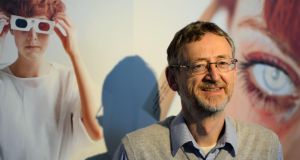 ‘The book’s title, A Mystic Dream of Four, is a quotation from one of Hamilton’s poems. The number 64 also has special Hamiltonian significance. “It’s four by four by four – four to the power of three,” Iggy McGovern explains.’ Photograph: Frank Miller

Poetry and mathematics are worlds apart. So, at least, it would seem to those of us who struggle to recall even the most basic numerical notions while being quite capable – even in addled old age – of unearthing chunks of Yeats or Shakespeare from the muddy depths of the memory.

However, forms of poetry which depend on regular rhythm are guaranteed to delight anyone who appreciates the elegance of numbers. Take the short lyric poem known as the sonnet. There is an almost infinite number of possible variations, but the definition of a sonnet is a simple, mathematical one: it must have 14 lines. The poem’s internal organisation also pertains to numbers; some sonnets have an eight-plus-six formation, others take the form of three lines of four plus two.

Perhaps that’s why the physicist and poet Iggy McGovern has chosen this particular literary form for his new book. A Mystic Dream of Four brings poetry and maths together by telling the story of Ireland’s best known mathematician, William Rowan Hamilton – who was also a prolific poet – in 64 sonnets.

The book’s title is a quotation from one of Hamilton’s poems. The number 64 also has special Hamiltonian significance. “It’s four by four by four – four to the power of three,” McGovern explains. In order to celebrate Hamilton’s famous discovery of the quaternion – a kind of four-dimensional number – on October 16th 1843, the book is sub-divided into four sections of 16 poems each, many of them in the voices of people who knew the great mathematician.

However you add it up, that’s an awful lot of sonnets. “I think I’ve cured myself of the sonnet,” McGovern admits. Reading the book, however, it’s clear that the poet is having fun with the rhyme-scheme, using it to express the various snipes, gripes and sideswipes of his diverse cast of characters. “There’s a really interesting bunch of people in and around Hamilton,” he says. “They all have something to say, and they all get to move the story on.”

One character who has plenty to say is Hamilton’s wife Helen: “I was witness to his darker days,/A genius, yes, but still a child half-grown”. It seems that Chez Hamilton wasn’t the happiest of households, possibly because – as a more contemporary unhappy spouse put it – there were three people involved in the marriage.

As a young man, Hamilton had fallen in love with a woman called Catherine Disney, and she with him; but she was promised elsewhere. Hamilton married Helen on the rebound. The star-crossed lovers, meanwhile, met several times in later life, always carefully chaperoned.

“There was a final getting together on her deathbed,” McGovern says. “He presented her with his life’s work: 700 pages on quaternions.” At which point, poor Catherine’s days were surely numbered – in more ways than one.

Another central character in Hamilton’s life was the poet Wordsworth who, despite being 35 years older than the mathematician, was a great friend. “It was a meeting of minds,” says McGovern. “Hamilton would send Wordsworth his poems, and Wordsworth would comment on them.”

Famously, Wordsworth advised Hamilton to stick to the day job. It turned out to be good advice; but how does Hamilton’s poetry read in the 21st century? “A little bit flowery, a little bit sentimental,” is his verdict. “The poems about the woman – about the misery of not being able to be with her – are pretty rough. You could see people in a creative writing workshop saying, ‘Um, I think you could shorten that’.”

As someone who has spent a lifetime working in the scientific world, being recently retired from his position as a lecturer in the department of physics at Trinity College, Dublin, McGovern has managed to equate the worlds of science and poetry in his own life.

“I don’t know that they’re all that different,” he says. “They’re both very important parts of culture. You have to graduate into each of them; whether it’s the reading of poetry or the reading of science, it’s a language to be learned.”

A Mystic Dream of Four will be launched in the Long Room at Trinity College, Dublin on October 31st at 6pm.