The Souls of China and Shanghai Faithful reviews 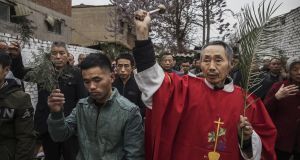 Book Title:
The Souls of China: The Return of Religion After Mao

For Karl Marx, religion was the creation of productive forces, “the sigh of the oppressed creature, the heart of a heartless world, and the soul of soulless conditions”. The ruling Communist Party in China is in harmony with Vladimir Lenin’s idea that “atheism is a natural and inseparable part of Marxism”.

And yet, for a communist nation guided by Marxist-Leninist theories of dialectical materialism and scientific socialism, China is a deeply religious place.

During the Cultural Revolution, the decade of ideological frenzy unleashed by Mao Zedong in 1966, Daoist priests were beaten and chastised, temples and churches destroyed, and monks and nuns forced to marry. Clerics were put in cages and displayed as examples of outmoded beliefs, while Red Guards hacked out the eyes of devotional icons with a quasi-religious zeal.

“There was one problem with Mao as a living god: he died,” writes Ian Johnson in his remarkable study of religion in China after the death of Chairman Mao, The Souls of China.

“Some people were thrilled – finally, the dictator was gone – but many were crushed. Genuine tears flowed, and the country ground to a halt.

With traditional religion decimated and Mao dead, where could one channel one’s faith?”

Just as Marx had a more complex view of religion than the “opium of the masses” line suggests, the Chinese Communist Party after Mao has combined its ideological mores with iron pragmatism.

Religion was again permitted, under the strict control of the state.

Nowadays, China has roughly 200 million Buddhists and Daoists, with another 50-60 million Protestants, 20-25 million Muslims and about 10 million Catholics, by Johnson’s reckoning, which adds up to about 300 million people.

“All told, this is a remarkable recovery, especially given the destruction of religious infrastructure and knowledge, the continued political suppression and the broader difficulties of defining one’s spirituality,” he says.

How do you nail down exactly what role religion should play in a communist country, officially atheist and, in China’s case, encompassing cults of personality and the “Year Zero”-style destruction of belief structures during the Cultural Revolution?

Religion has even come to play a part in the global geopolitical story, as Beijing spars with the Vatican. Religion in China traditionally had little in the way of clergy, few fixed places of worship and little theology.

“But this didn’t mean Chinese religion was weak. Instead it was spread over every aspect of life like a fine membrane that held society together,” he says.

While an atheistic body, the party has been keen to encourage spirituality and harness it, to fill the void left by consumerism, which is seen as a threat to stability. This is something the communists value above all else.

“We thought we were unhappy because we were poor. But now a lot of us aren’t poor anymore, and yet we’re still unhappy. We realise there is something important missing, and that’s a spiritual life,” one believer says.

To tell his story, Johnson chooses three groups of believers – a family of Manchus who make an annual pilgrimage to a temple in Beijing; a family of Daoists in Shanxi; and Protestant Christians in Chengdu, the capital of Sichuan province. He is fond of the people he writes about, and we learn of the trials and tribulations of the families, some related to matters religious and others relating to wider issues in Chinese society.

Just as in his previous book, Wild Grass, which deals in part with the Falun Gong spiritual movement, there are fine lyrical moments, such as in the section “Awakening of the Insects”, a reference to the ancient practice of dividing the year into solar terms. Early March is when thunderstorms were believed to wake up sleeping insects.

To those living in China, he offers fresh ways of looking at the familiar.

Visit the Great Hall of the People today, where Irish leaders such as President Michael D Higgins and former taoiseach Enda Kenny have been hosted, and you are struck by the stern Stalinist lines and the cold war feeling permeating the stones of the building.

But even here, the communists have co-opted some religious iconography in the way the pillars sit on lotus petals, a Buddhist symbol of “purity and uprightedness”. There are a dozen pillars, equal to the 12 columns in the Hall of Supreme Harmony in the Forbidden City.

Feng shui geomancy informs how the building is sited slightly off-centre on the west of Tiananmen Square, so that it does not face the entrance of a memorial to those who died for the communist revolution.

The book recounts extraordinary tales of courage and heartbreak, like that of Xu Jue whose son was killed in the 1989 Tiananmen massacre, and whose husband died of grief soon after.

For her, playing hymns was a support, and the annual ritual of visiting the graves of her husband and her son was a comfort and a source of human connection, even with the police escorting her to the graveyard.

The book ably moves between the small stories of individual believers and the vast apparatus of power in China.

Johnson provides the broad background so essential to telling the story of China, a country where the scale and size of population makes events difficult to grasp, and he renders the data meaningful by listening to ordinary people and telling us their side.

One chapter tells of Li Bin, whom Johnson comes across as a feted world music exponent in New York. When he tracks him down to Yanggao in Shanxi, he finds he is actually a Daoist official, a ninth-generation “yinyang” man who is a cross between a geomancer, a funeral director and a fortune teller.

He attends a funeral with Li, during which they come across the grieving second son, Liu Hexuan, who repeatedly asks: “Why are we here, foreigner? Tell me!” before collapsing head-down drunk on the table.

The question is never answered, of course, and forms one part of a tableau of events at the funeral that conveys a cross-section of images from contemporary China, a country still finding its way and learning to live with itself.

Missionaries have been central to the story of overseas influence in China, starting in the late-16th century with the Jesuits and Matteo Ricci and playing a prominent, often controversial, role in the course of Chinese history thereafter.

Jennifer Lin, in her moving family history, Shanghai Faithful, uses the experiences of her grandfather, Rev Lin Pu-chi, to recount the extraordinary route Christianity took over five generations, from remote missionary churches in the 19th century to cosmopolitan Shanghai in the 1930s and right up to and past the Cultural Revolution.

There are stories of oppression and courage, but also a rueful sense of opportunities lost, of a liberal and humane community persecuted and ultimately exiled for their beliefs.

In Johnson’s book, we see the work of Rev Lin being continued in Chengdu by people such as the German Christians Ursula Seidt and her husband Manfred.

Reading of the Protestant missionaries, you can see why the Communist Party is more at home in dealing with Roman Catholicism – the Holy See has a recognisable head in the pope and a structure not dissimilar to that of the party itself. Protestant churches are multifarious, often individuals acting alone, with diverse structures, a challenge for the Beijing authorities to marshal.

Positioning itself as an investigation of religion in China, Johnson’s book ultimately explores broader ideas of belief and ritual to find a universal message, about uncertainty and the search for values.

These are the challenging questions of our age, but Johnson has a gentle style, ensuring the book never becomes overbearing. For a book about evangelists and preachers, it is never preachy. Nor indeed, are its subjects. In China the group, the masses, are often presented as the ideal to which the individual must bow. In The Souls of China, the individual makes a strong bid for the restoration of their rightful place at the heart of the narrative.

Balloon couldn’t have landed at a more insulting moment
5