The Shoemaker and His Daughter review: a personal glimpse of Soviet Union 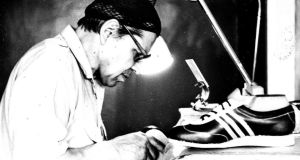 Stanislav Suvorov is Conor O’Clery’s father-in-law and the father of his wife Zhanna.

Book Title:
The Shoemaker and His Daughter

In the many accounts of the history of the world, the importance of good footwear is surely under-represented. The Shoemaker and His Daughter goes some way towards addressing this deficit, telling us that the production of an innovative new type of military boot in wartime Russia was of equal importance in defeating the Germans as the invention of the Katyusha rocket launcher. We learn that Khrushchev himself “once said that in his early days in tsarist Russia every villager dreamed of owning a pair of boots”. Even after the war, the quality of mass-produced shoes in the Soviet Union remained poor. “Protruding nails, inadequate waterproofing, cardboard vamps – uppers – and even heels tacked on in the wrong place” were common complaints.

No surprise then that the titular shoemaker of this fascinating personal history becomes a self-made man in postwar Grozny by running a clandestine workshop at the back of his house producing bespoke shoes and boots. Stanislav Suvorov is Conor O’Clery’s father-in-law – father of his wife Zhanna – and through the story of their family O’Clery takes us deep into the history of the Soviet Union and post-Soviet Russia. The family tree at the start of the book gives a preview of the tangled web of relationships the reader is about to enter. The politics are complicated too, following the Suvorovs from their origins in Nagorno-Karabakh and Chechnya to a remote city in Siberia, from the Stalinist era to that of Putin. O’Clery’s use of this one family as a viewfinder renders this vastly dense history easily navigable. Everything becomes personal, from the party system of patronage that rewards the skills of the shoemaker – again the importance of footwear – to the nuclear missile installation that lurks behind the trees at the summer dacha the Suvorovs buy in the 1980s.

The Suvorovs are Armenians. They’ve made their home in Grozny, the Chechen capital. In a place of relative bounty compared with other parts of the Soviet Union, the young Stanislav and his highly capable wife, Marietta, carve out a good life for themselves under Khrushchev, with a standard of living comparable to a middle-class American family. They have a nice house, with a garden where they grow fruit and vegetables. Most of all, they have a car – a blue Volga sedan – bought on the black market and later sold at a profit. But the sale of the car brings about an abrupt reversal in the family’s fortunes when the shoemaker is arrested and jailed for violating the Soviet ban on profiteering.

Stanislav’s jail sentence haunts the family, driving them on his release to abandon their Grozny home, with its apricot trees and jasmine, and move to Siberia. They settle in the city of Krasnoyarsk, where Zhanna’s school only closes when the temperature drops to minus 51, and where “the metallic cold outside, the depressing landscape of factories and prisons and the polluted air” are mitigated by a climate of greater freedom. People are not afraid to speak out because “what can Moscow do? Send them to Siberia?”

Through Zhanna’s story we experience the isolation of life in Soviet Russia where “near abroad” is Latvia and Armenia, while “real abroad” extends only to Romania and Bulgaria. When Zhanna is brought as a translator on a Mediterranean cruise in 1983 she is warned by the KGB not to give any foreigner her home address. Her relationship with O’Clery – a romance he recounts with a shy discretion that is nonetheless touching – brings the KGB down on her again.

Zhanna has grown up unaware of what Gorbachev calls “the blank pages of history,” but with the advent of glasnost, “people wonder not just what the future will look like in a year’s time but what their past will look like”. The Moscow beauty spot the O’Clerys can see from their balcony turns out to hold the mass graves of Stalin’s victims. The system Zhanna once respected was founded on “lies and monstrous crimes”. Added to her disillusion is the loss of her parents’ savings in the hyperinflation that follows the collapse of communism, the growing criminality, and the ethnic conflict ravaging their home place in the southern Caucasus.

This history is told in the present tense, which gives it immediacy, and O’Clery, who retired from The Irish Times in 2005, after reporting from Washington, DC, as well as from Moscow, is an elegant and scrupulous writer. His consistently excellent reportage is further enriched by Zhanna’s memories. Memories of the four-day train journey with her grandmother from Grozny to Moscow where they lined up to see Lenin’s embalmed body. Memories of the “magic briefcase” her father would open to reveal scarce treats like sausages and sweets, and the summer picnics of roast lamb and aubergine the family enjoyed in the subarctic forests of Siberia. In this detail there is for the reader the fascination of other lives lived, in other places, in the grip of turbulent events.

Kathleen MacMahon’s most recent novel is The Long Hot Summer