The politics of plants: understanding the symbolism of flowers 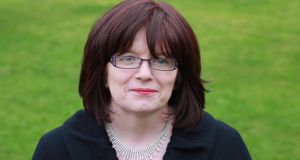 Ann O’Loughlin: If my novel prompts any of my readers to delve further in to the centuries-old language of flowers, I can guarantee they will be richly rewarded.

Aren’t all politicians hoping for red roses on election day? Rich red roses may yell out “I love you”, but those at the hustings can only pray they won’t be presented with a withered rose, when ballot boxes are opened and the votes counted. A withered rose is most definitely an unambiguous botanical slap in the face.

The language of flowers is subtle, but can speak the truth in the strongest way possible. A politician handed a tall foxglove shouldn’t be flattered and start dreaming of the travel and accommodation allowances as an elected member of the Dáil….the foxglove indicates insincerity. A bowl of blue hyacinths on the other hand might be a good omen as these blooms signify constancy.

However, our would-be public representatives should recoil from an offer of lavender. Lavender bellows mistrust. It goes back to the days when it was less in fashion and used primarily to mask bad smells.

Best that the politicians in the scramble for our votes seek out bluebells, the symbol for humility.

But then all elections are like the vain hydrangea in our gardens; unpredictable, which probably has something to do with the hydrangea’s ability to change colour, depending on soil conditions.

Time for the candidates as they pound the pavements to stamp on some basil in the hope of avoiding bad luck.

The more I delved in to the language of flowers and its ancient roots for my latest novel, An Ocean Between Us, the more I appreciated this secret form of expression.

The symbolic language of flowers is seeded throughout the book, so the reader is brought on a journey, learning the nuances and the significance of even the most humble flowers and plants in our gardens.

It is fitting in the first chapter the bouquet of flowers delivered to New Yorker Cora Gartland from her long-time partner Jack is of yellow roses. In the world of roses, the yellow blooms speaks of infidelity and a weakening of love.

Shortly afterwards, Cora’s world falls apart when she learns Jack has been killed in a car crash in Ireland. Her pain intensifies when she is told there was a woman in the car with him, a woman identified as his wife, Amelia.

Devastated, she travels to Dublin to try to make sense of Jack’s secret life. As she grieves, she must learn to survive, and to do that she must find the truth.

In shock and desperate to know more, she moves in to the big old Georgian house at DeCourcy Square, Dublin previously owned by Jack . As she comes to terms with her loss and his deception, she gets to know her neighbours.

Next door, Lily is trying to turn her life around following the death of her husband in recent years.The two women become friends, leaning on each other as they both take brave new steps.

Both women also become embroiled in the battle to save the lovely park at the heart of DeCourcy Square.Neither Lily or Cora realise their actions will unearth the biggest secret of all and it will take all their strength to survive it. Both women must fight to find themselves and both women must learn to trust again, before they can move on.

Lily knows all about this way of communication. In the funeral bouquet for Jack and Amelia, she includes pink peonies to suggest their devotion to each other; sweet peas a parting gift to friends; the rosemary is there to highlight remembrance.

Rosemary was one of Napoleon’s favorites. His beloved Josephine loved the tiny purple violet. When she died, he had her grave covered in violets and the story goes when he was exiled, he brought some of those violets with him, pressed in to a locket, which he always wore around his neck.

I was very lucky writing when An Ocean Between Us to have the opportunity to spend so long in the world of flowers and learn its secret language. I found the more I studied the symbolic language of flowers, the more specific and interesting my choices became for my own garden.

If my novel prompts any of my readers to delve further in to the centuries-old language of flowers, I can guarantee they will be richly rewarded.

And my advice to all those general election hopefuls, don’t be left holding the purple verbena after the final count ….. for it is the symbol of regret.
Ann O’Loughlin’s fifth novel An Ocean Between Us is published by Orion and is out now