The other UCD: University of California, Davis, aka Hippie Heaven

This is the other California: less plastic surgery and more home-made-deodorant. A few call Davis ‘everything that’s gone wrong with this world since the sixties’. I call it home 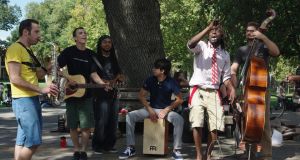 A different live band plays every week and if there’s a better way to get your head round not living in Scotland anymore than sitting on dry grass watching spontaneous dancing, I can’t think what it could be. To sum up the spirit of Davis … there’s a willingness to be delighted by life that you don’t often find in the old country 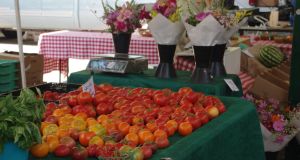 If you were to stop off here between Alcatraz and the redwoods, try to make it a Wednesday, when Davis Central Park becomes the farmer’s market and the whole town has a picnic tea.

Tell friends in Scotland you’re moving to California and palm trees come up in their eyes. But when I went west in 2010 it was to the other California – less plastic surgery and more home-made-deodorant – to a town called Davis. Some call it The People’s Republic of Davis; others Hippie Heaven. A few call it “everything that’s gone wrong with this world since the sixties”. I call it home.

And, like a typical incomer, I’ve fallen in love with this friendly, quirky, slightly bonkers little town.

It started with the bikes. Davis, unusually, is built for bikes: 98 per cent of its main streets have bike lanes. There’s a 12 mile traffic-free loop that meanders through parks and green corridors and connects all the primary schools with the residential areas. There’s a museum of cycling. The town symbol is a penny farthing. There are bike parks wherever there’s a shop, there are bike hire/buy/fix-it shops a-plenty, and even public bike pumps dotted around the downtown in case your tyres get soggy when the bikes shops are closed. And since it’s as flat as a breadboard and there’s no rain for eight months of the year, cycling is a joy.

Add the bus service (of decommissioned London Routemasters) and the fact that a train runs from San Francisco to Sacramento right through Davis town centre, and it’s one of the few places visitors can enjoy without a car on the whole of the west coast.

If you were to stop off here between Alcatraz and the redwoods, try to make it a Wednesday, when Davis Central Park becomes the farmer’s market and the whole town has a picnic tea. The heart of the market is fresh fruit and veg, from large commercial growers selling a few dedicated crops – oranges, figs, tomatoes – to smallholders selling whatever was ready for picking that morning, but there’s also local wine, bread, cheese, olive oil, almonds, wildflower posies and that home-made deodorant, of course. The town’s restaurants bring vans and fill the air with barbecue smoke and spices. A different live band plays every week and if there’s a better way to get your head round not living in Scotland anymore than sitting on dry grass watching spontaneous dancing, I can’t think what it could be.

As for high days and holidays, many Davis residents would steer you towards April and the annual “Picnic Day” of the University of California, Davis. It’s notable that I got this far through an article about Davis without mentioning UCD, actually. Of the 65,000 residents, 35,000 of them are UCD students, and many of the others are faculty and staff. It makes for a lot of coffeeshops, which is fine by me.

Picnic Day has been held every April since 1909, featuring Dachshund and cockroach races, a battle of marching bands, a chemistry magic show and a liquid nitrogen ice-cream demo. And cows. (The campus started as the agricultural wing of the UC system and its sports teams are still known as the Aggies.)

But the real red letter in the Davis calendar is August 31st. On the stroke of midnight, all the leases on all the apartments of all those students run out and they move. They pack their belongings in U-hauls and vans, or in bundles on skateboards, and flit to next year’s pad. Now, one of the quirks of the apartment-renting scene is that every flat has to be left completely empty. The organised students cope. The others – young and carefree – panic and put everything they can’t fit in the U-haul (or on the skateboard) at the side of the road. Thus Dumpster Diving Davis was born.

The city authorities lay on huge skips for actual rubbish, cordoned off areas for useable furniture, tables for breakable items and boxes for textiles. And people – students and townies alike – roll up and take what they need. Or want. Or suddenly can’t live without, like last year’s inflatable Titanic and verdigris Shiva. I’ve always loved a charity shop and never let a jumble sale go by, so when I first experienced dumpster-diving Davis style, it was one of the happiest times of my life. We’d had to leave all electrical items behind in Scotland because of the voltage difference, but picking up a fridge, cooker, dishwasher, toaster, kettle, hairdryer, Hoover and foodmixer for the low, low price of nothing at all took some of the sting out of it.

Of course, not every day has Dachshund races or free white goods. Most of a writer’s life is typing. But typing in Mishka’s Cafe in downtown Davis, sipping their home-roasted coffee, has a lot to recommend it, occasional bursts of Leonard Cohen on the sound system aside. There’s the no-nonsense way Mishka keeps students (and writers) in their place, for one thing. Next door, waiting till work is done, sits the art deco splendour of the Varsity Theatre, where indie films change every week. Through the hatch, is Icekrimski’s gelato shop for those afternoons when even cycling can’t whip up enough of a breeze to offset the heat. And across the road is the Avid Reader, where I know my latest story – if I ever finish it – will get a warm welcome.

To sum up the spirit of Davis … there’s a willingness to be delighted by life that you don’t often find in the old country. For example, when a developer bought a plot of land to build more student flats, he didn’t want the pair of 1940s cottages currently standing there. So he gave them to the housing co-op (aka commune) down the street a few blocks. And the city authorities closed the street to let lorries take the cottages to their new location. Did Davisites grumble? No. They put a piano on a flatbed truck and it followed the cottages, while a pianist played Madness’s “Our House”. And the primary-school children got let off classes to join what had suddenly become a parade. On their bikes, naturally.

Catriona McPherson is the author of The Child Garden (Constable, £8.99), praised by Val McDermid (‘if you like your thillers twisty and twisted, then you will love The Child Garden’), Ian Rankin (‘a gripping thriller’) and Alex Marwood (‘a deliciously disturbing tale of deception’)