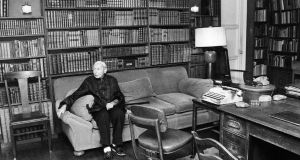 In April 1933, British prime minister Ramsay MacDonald made a proposal to the celebrated German writer Lion Feuchtwanger, who was living in exile in France. MacDonald wanted to warn the British public about the dangers of nazism, and suggested that Feuchtwanger collaborate with the British screenwriter Sidney Gilliat to write a film on the subject. Feuchtwanger came up with the idea of telling the story of the impact of Hitler’s regime on an apolitical Jewish family in Berlin, and the pair quickly wrote a script.

When the British government decided against the plan at the end of May, a frustrated Feuchtwanger expanded the script into a novel, drawing on first-hand accounts of what was going on in Germany at the time of writing. The result was The Oppermanns, an astonishingly vivid and moving account of the immediate impact of the Nazis’ accession to power.

9 Foley accuses union of being ‘disingenuous’ on school reopening claim

12 ‘We’ll see each other again’: Trump bids farewell to Washington

14 Michael Harding: Talking to strangers. That’s what I miss

15 ‘I got a burning smell in my nose’: Third-wave Covid-19 patients share their experiences

18 Q&A: Can I still pass Covid on after I’ve been vaccinated?

20 Gordon D’Arcy: Time for IRFU to be bold and secure futures of prized assets

21 Kathy Sheridan: There is no fairytale ending to the Trump version of American Psycho

22 Kamala Harris is about to make history. So is her ‘big, blended’ family

24 What can Ireland expect from Joe Biden?

30 Is this the face of Ireland’s lost patriot Robert Emmet?

33 Man who sexually assaulted woman on Luas tram is jailed

34 What are Joe Biden’s Irish roots?