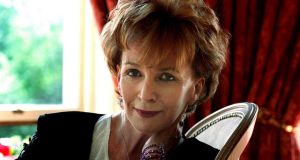 “I am a serious writer, I take my work very seriously”: Edna O’Brien on her unparalleled work ethic. Photograph: Bryan O’Brien

Edna O’Brien’s extraordinary literary career has lasted for over 60 years, and yet it seems that critics are still having difficulty keeping up with her. The latest misreading of the author and her work appeared last week in the New Yorker, in an appallingly disrespectful and sexist article by staff writer Ian Parker.

It is an astonishing editorial decision by the magazine – a home from home for O’Brien that has published her stories for more than 50 years – to run such a piece targeting one of their own writers.

Ostensibly a profile of the acclaimed Irish novelist, it is in fact an account designed to make O’Brien fit into Parker’s predetermined narrative. Not only does he scoff at O’Brien’s appearance and lifestyle, he also ridicules her Irish locution when she discusses her current illness. Parker notes derisively that she refers to it as “‘the cancer,’ as she has put it.”

This is shockingly cold-hearted and questionable behaviour for a critic employed by one of America’s oldest and most reputable periodicals. Nevertheless, Parker’s condescending attempts to undermine the established, award-winning author by trivialising her work and maligning her character are typical of the sexist criticism that O’Brien has faced since the publication of her ground-breaking debut novel, The Country Girls, in 1960.

O’Brien has always been ahead of her time. Consequently, as a recent New Statesman headline pronounced, her work has been “Banned, Burned and Reviled”. Critics, institutions and members of the public have repeatedly used this censorious backlash as an excuse to aim personal attacks at O’Brien, hurling accusations of sensationalism, frivolity and solipsism.

Parker goes so far as to question the veracity of a gang rape scene in her latest book, Girl, a novel about the Boko Haram kidnappings of Nigerian schoolgirls, which was published by Faber and Faber in September.

In 2016 and 2017, O’Brien made two trips to Nigeria to interview several young women who had escaped jihadist capture. Their experiences inform Girl, whose narrator Maryam recounts her story of captivity, as well as those of her fellow schoolgirls.

Rather than contacting the experts who advised O’Brien on conditions for the girls while she researched and wrote the novel, Parker apparently became an expert on Nigeria overnight through the sheer force of his staggering powers of deduction. He comments, “Not all of Boko Haram’s acts of sexual violence may have been reported, but researchers I spoke with were unaware of such incidents.”

He gives himself away when he adds, “O’Brien’s version of the Boko Haram conflict seems to be based less on reported fact than on a fiction writer’s desire to describe a society built wholly on male cruelty.” From his blinkered, masculinist perspective, Parker ignores the magnitude of O’Brien’s courageous decision to travel to a conflict zone while in her mid-eighties in order to give voice to these vulnerable young women.

O’Brien’s work ethic is unparalleled and she affirms in a 1992 interview, “I am a serious writer, I take my work very seriously…What I hate is the diminishing and the cliches. I am not a cliche.” It is critics like Parker who are the cliches, while O’Brien continues to transform, stretching herself as a writer to her utmost limits.

As she observes in a recent Guardian interview about Girl, “It was new territory for me, emotionally, geographically, culturally. I had to discard the things that have fortified my writing for 60 years – landscape, lyricism, love. I had to put all those things aside and just dive in as if this was the first book I had ever written.”

The result is a masterpiece, a heart-wrenching story of loss and redemption powerfully rendered in O’Brien’s singular voice, which is at once fierce and tender, conscientious and visionary. Long may that voice endure.