Writer is sanguine about the incident, saying : ‘for 40 minutes I was a Nobel Prize winner’ 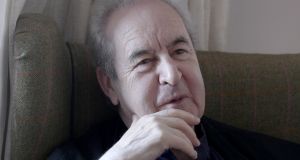 Two days after being led to believe he had won the Nobel Prize in Literature, John Banville has said he believes the hoax bore all the signs of someone with a grudge against the Swedish Academy.

Shortly before two new laureates were announced on Thursday, the Irish writer received a fake but convincing call from someone purporting to be the head of the Academy. However, the good news quickly turned out to be a fraud.

In an interview with The Irish Times on Saturday, Mr Banville sees the humour in the situation but believes the Academy should investigate the matter given the call appears to have come from its own offices in Stockholm.

“I have the distinct impression that I wasn’t the target of this really. I think he assumed that I would believe him and that I would make a big fuss in the newspapers and say this is another dispute within the jury,” he said at his home in north Co Dublin.

“I think that’s what he expected me to do because that would embarrass the Academy.

“Specifically he was talking about some woman on it who was deeply into gender studies. So I suspect it was her that was the target.

“It wasn’t done for fun. It has the hallmarks of a man with a grudge. Not a grudge against me.”

Mr Banville, a recipient of the Booker Prize among many other awards and honours spanning a decades-long literary career, is sanguine in the aftermath of the experience in which “for 40 minutes I was a Nobel Prize winner.”

He sees the funny side but admits to a difficult 30 minutes after his realisation he had not in fact been selected by the Academy.

On Thursday, shortly before the ceremonial unveiling, he was contacted by a man pretending to be Mats Malm, permanent secretary of the Swedish Academy, the body that administers the prize, informing him of his selection. A fleeting high quickly descended into disappointment and confusion.

“My daughter phoned at 12 and said ‘Dad, I’m watching this (ceremony) live, what’s going on? You’re not named.’ So I thought immediately, oh it must be a hoax. Then I had to phone desperately all the people I had phoned in the previous half hour to tell them, look, I haven’t won it. It must be a hoax.”

The imposter was convincing and apparently prepared. He read out the citation the Academy was to present at the ceremony and told Mr Banville he would be back in touch.

After the announcement, the same man left a voicemail desperately explaining there had been a last minute disagreement among Academy members and that the prize had to be withdrawn.

“Because the first call was so convincing I assumed that the second call, which was much less convincing, was that this man had made a mistake and he was upset. He certainly sounded upset, he was a very good actor,” Mr Banville explained.

But later as he listened back to the message and compared the man’s voice with the real Mats Malm on a YouTube recording, “the awful reality set in.”

He later phoned the number that appeared on his call log and it duly returned him to the Swedish Academy office. This remains the outstanding question - did the hoax call really come from the heart of the Academy?

Mr Banville wonders if it was someone internally, someone simply using their phones, or perhaps a technological fix that made the number appear on his phone. He does not know, of course, but he believes the Academy - in his view the intended target of the scam - would be best to look into it, something the real Mr Malm has already confirmed they will do.

“I imagine the guy was clever enough to cover his tracks and won’t be tracked down,” Mr Banville said, describing the call as elaborate.

“I presume the Academy will look into it very carefully because if they have an ill-wisher inside the Swedish Academy then they have a problem because he will do it again.”

Reflecting on the experience of believing, albeit for a brief moment in time, that he had won the prize, Mr Banville said that being “told you have won a prize that big hits you like a punch in the solar plexus.”

But, he explained, while awards are welcome they have nothing to do with the work.

“Prizes appeal to the eternal child inside all of us…if you get a prize like the Booker prize or even the Nobel it’s the biggest red toy fire engine in the world,” he said.

“But it doesn’t affect the work. I would be a very poor writer indeed if a prize affected my work.”