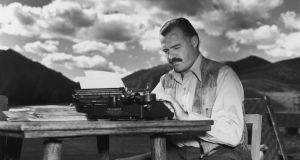 Ernest Hemingway: ‘Certainly the interior monologue is shit – it always takes place in the mind of the author – not the citizen he is writing about. I think it is legitimate for the Irish because their minds go that way’. Photograph: Lloyd Arnold/Hulton Archive/Getty Images

It would be conceivable to think that every mote of enlightenment has already been swept from the attic of Ernest Hemingway’s life.

Since his death in 1961, we have had numerous biographies; books documenting his friendships with contemporary literary luminosities such as F Scott Fitzgerald, Gertrude Stein, or Ezra Pound; collections of pontifications by Hemingway in, and out of, the writer’s chair; selected letters’ series relating to “Papa”; publications about Hemingway on big-game hunting, bullfighting, or fishing; and many, many others. Then there has been the hungry analysis of Hemingway’s personal life following his suicide in Idaho, just short of his 62nd birthday: from how this sad coda replicated a similar act by his father in 1928 (while Hemingway was in his late 20s), to more trivial issues, such as the fact that some of his wives possessed boyish haircuts.

Can there be much more matter for conjecture on this colossus of the writer’s craft? Well there is thanks to Cambridge University Press, which is well under way in its plans to publish every extant private-letter penned by the American. More than a dozen volumes in total are anticipated and the latest volume of Hemingway’s correspondence covers the years 1929-1931. The project is a remarkable feat of scholarly endeavour, and after finishing this volume, I cannot wait for the next instalment. The letters simply bounced the echoes of Hemingway that have lay in the corners of my mind since first reading his work as a teenager.

One of Hemingway’s best-known declarations on his style of writing used the analogy of an iceberg, whereupon he said: “The dignity of movement of it (an iceberg) is due to only one-eighth of it being above water.” He usually claimed to dislike discussing his writing, in case he might stymie its flow, but the full quote adds: “If a writer of prose knows enough about what he is writing about he may omit things that he knows and the reader, if the writer is writing truly enough, will have a feeling of those things as strongly as though the writer had stated them.”

This idea kept bobbing about in my thoughts as I made my way through the book. To adapt the iceberg theory to this glacier of words we have in store from Hemingway (probably a dozen more volumes to come!), the novels could be considered the one-eighth that was on show: the public figure, the dedicated craftsman, “Papa”, the winner of the Nobel Prize in Literature in 1954, tough, cocky, dignified and graceful. Meanwhile, the letters are what floated underneath and are the man: roughly formed and expansive, solidly packed with braggadocio, yes, yet full of squeaking uncertainty and insecurity. They show the struggles and groans to write and the darkness where Hemingway’s mind would often drift, and the inner conflicts that gave much of what he published such power and depth.

The sheer fun of this series is that it seats the reader right in Papa’s chair. You travel with him in body (physical ailments) and mind (fulminations of thoughts), armed only with yourself, Hemingway’s madcap voice running in your head, and perhaps a Highball or two to savour along the way. The correspondence is a joy to read (if we skip the detailed letters on guns, etc): irreverent, gossipy and bitchy, funny, sincere, we have all sides of Hemingway, from the playful to the portentous. We see his puckishness and genuine affection, in his close relationship with his generous editor Maxwell Perkins, for example; we find his guilt in leaving his first wife Hadley and his awkward relationship with his mother, and the cross he felt he was carrying in keeping her and his young siblings financially solvent after the death of their father. We have it all, here.

The letters are frequently very funny; belly laughs material. To take one example, in a letter to Pound in February, 1930, Hemingway writes about Henry James and the interior monologue. It is worth quoting at length, spelling mistakes and slipshod punctuation included:

“Certainly the interior monologue is shit – it always takes place in the mind of the author – not the citizen he is writing about. I think it is legitimate for the Irish because their minds go that way – But I know personally I have never had one going on in my mind in my life . . . I know the interior monologue is a trick because it is the easiest damn thing to write – I have cut out thousands of them out of Mss. All shit. You write that stuff when you wont bite on the old nail.”

Anyone who already knows of Hemingway’s personality will expect to encounter the obnoxious side of the man, and we have much, too much, to swallow in the letters: racism, anti-Semitism, misogyny, and homophobia; all the cruelties are here as a casual crutch for his wounded pride to usually fall on. Of course the letters were written in the private sphere, but some of the language is despicable and inexcusable, so there can be no justification for his feelings whatsoever. Yet they do possess historical value in that the reader gets a glimpse of the drawn-curtain xenophobia or homophobia that existed among the educated, middle classes (such as Hemingway was) and the language that was unashamedly used in the times he lived and was writing. Fortunately the editors with their studious, detailed and exhaustive annotations have done an exceptional job of placing the letters in their proper clothing, so that we are able to make our own measurements of Hemingway as a man. These letters are a waterfall of Hemingway’s feelings, so we get the licentious and the loving – but then the flaw in the iris can be just as intriguing as the beauty of the eye.

The correspondence is best read alongside the novels he was writing at the time; it breaks the flow. But more importantly it refreshes your instincts on what he strove to achieve, and what made him the exciting writer he became, and remains. A reasonable way to sum up the value of this project is to return to something Hemingway once said: “Read everything I write for the pleasure of reading it. Whatever else you find will be the measure of what you brought to the reading.” We cannot say fairer than that.