The Labyrinth of Spirits by Carlos Ruiz Zafón: a novel to lose oneself in 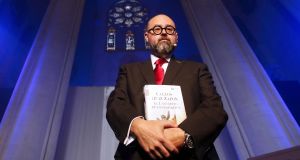 Book Title:
The Labyrinth of Spirits

The final instalment in the tetralogy of novels that began with the international bestseller The Shadow of the Wind (translated into English in 2004), Carlos Ruiz Zafón’s The Labyrinth of Spirits opens with an homage to Daphne du Maurier’s 1938 gothic masterpiece Rebecca: “That night I dreamed I was going back to the Cemetery of Forgotten Books”. With that echoing line, Zafón cleverly announces a shift in tone in this final book, leaving aside the air of magical realism in the earlier works and focusing instead on something closer to the mystery novel, the gothic detective story, even the thriller; though, at more than 800 pages long, it is not consistently pacey.

Each novel in the tetralogy has its own narrative, though The Labyrinth of Spirits revisits many of the characters from The Shadow of the Wind. In the first book, Daniel Sempere (the protagonist) was taken by his father to the Cemetery of Forgotten Books, where he chose a book called The Shadow of the Wind, beginning the saga of four interconnected novels set in a distinctly mist-bound and twilit Barcelona, moving from the industrial revolution through to the Spanish civil war. In The Labyrinth of Spirits, Sempere is now an adult, haunted by the enigmatic death of his mother, Isabella, and led by a new heroine Alicia (like her namesake character in her favourite book, Alice in Wonderland) down into the dark, knotted underworld of the city, “into madmen and mathematical problems”.

In this final work, we find ourselves in Franco’s Spain, in a Barcelona that exists as “a never-ending gloom where outlines could barely be made out in the dim, flickering light of candles and oil lamps placed on balconies and inside entrance halls”. That atmosphere is held in place by the black and white images of a city that are interspersed throughout the book. In one particularly striking photograph, a child is pressed, arms raised (as if in awe) against a bookstore window, while the wet tiled pavement gleams in the background. It is an image of sanctuary in a temple of the written word, appropriate to Zafón’s complete reverence for the power of books.

As ever, Zafón’s writing in sumptuous and expressive, and his English translator Lucia Graves carries his phrasing with characteristic poetic skill. Fountains are “suspended like a necklace of glass tears”, an exploding firework is a “tree of light”. Short chapters and scenes keep the reader gripped for the first half, making a long novel compulsively engaging. A more ruthless editor, though, might have done well to have taken out some of the more repetitious phrasing, and the novel’s second half lags with some drawn-out scenes and dialogue (the function of which is often to remind us of information from earlier in the book – a sign, perhaps, of its slightly unwieldy length).

Nevertheless, the plotting is impeccable, interlocking, indeed labyrinthine, a machine designed to work itself precisely to conclusion. The book unfortunately rarely challenges or questions its setting (Franco’s Spain), and the human travesties and injustices of history (imprisonment, child trafficking) come close to being plot devices rather than points for complex debate. The story has a sense of the fantastical, however, and in this way exists outside of time, despite its historical setting. Zafón’s work is moving and engaging. This is a novel to lose oneself in, and it promotes the sort of reading experience we remember from childhood – of complete absorption into a fantasy world – but rarely attain in later life.

The Labyrinth of Spirits has an unfortunately twee epilogue, and the novel’s conclusion feels over-extended, but for a tetralogy of such scope and with such complex plotting, there is a lot to wrap up. In an interview with the Washington Post, Zafón commented on his reluctance to allow film adaptations of his works, suggesting that film couldn’t carry the complex mechanisms of his narratives. He talks about his stories as though they are intricate machines: “If you touch it, it will explode. Nobody can make it better because nobody knows how it was put together”.

One certainly has this sense after finishing The Labyrinth of Spirits, a novel of complex interlocking parts, where the subplots have subplots, and where the author seems to have tied everything together by sleight of hand. There is an Emily Dickinson poem that begins “There is no Frigate like a Book / To take us Lands away”. Zafón certainly proves that point. Fermín, who readers may remember from earlier volumes as a prisoner in Franco’s jails, returns in The Labyrinth of Spirits hiding in a cargo ship. Zafón quips that “any self-respecting stowaway knows that the hardest part isn’t smuggling oneself on board: what is difficult is getting out of the situation safe and sound and abandoning the boat without being seen”. In The Labyrinth of Spirits Zafón has pulled off a similar trick with admirable skill.