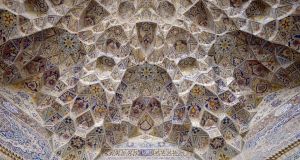 ‘I think Islam hates us.” It is impossible to pick Donald Trump’s most dangerous statement, but that line from last year reveals one of the most terrifying aspects of his presidency: that at the heart of his administration lies a belief that Islam and “the West” are locked in a clash of civilisations. Such views are disturbingly widespread: polls consistently find that many western voters see a fundamental conflict between Islam and “western values”. Islam, many argue, needs an “Enlightenment” to bring it into the modern age.

In this sweeping and timely book, Christopher de Bellaigue shows that such ideas are based on historical ignorance. In the century or so after Napoleon’s conquest of Egypt in 1798, the Islamic world “engaged lustily with modernity”, and just as in Europe – a constant reference point for Muslim modernisers – both progress and reaction characterised a “vortex” of change. “In the process of transformation,” wrote Edmondo de Amicis of Constantinople in 1878, “everything is in confusion”.

Napoleon’s success, and the slow retreat of the Ottoman Empire, had a profound impact, leading intellectuals and politicians to question a sense of “superiority” that had ignored major European advances from printing to plague control. When one of the Ottomans’ first western-style artillery guns blew itself up, officials debated whether the disaster was punishment from God or a vivid example of backwardness. How to approach modern ideas swiftly became the defining question of Islamic politics.

Visionary individuals and “progressive autocrats” embarked on programmes of reform. In Cairo, Muhammad Ali (“enemy of the foot-draggers”) and his grandson Ismail Pasha – “We are now part of Europe,” he proclaimed in 1879 – laid the foundations for an Egyptian state. In Istanbul, the sultans liberalised commerce and granted greater equality to minorities, while in Tehran, chief minister Amir Kabir set about transforming Iran’s archaic state. Slavery was abolished, citizenship widened, telegraphs and railways constructed: modernisation was the order of the day.

Public engagement in politics widened. Ibrahim Sinasi founded the first Turkish newspapers (a “social body” has the “right” to comment on “the state of their country . . . by word and pen”, he wrote), and redefined Turkish language and writing. Debates about women’s rights and equality began: “Are we not humans?” wrote a Turkish feminist in 1869. The Iranian intellectual Mirza Saleh travelled widely to collect ideas and campaign for secular reform, arguing that “as long as the mullahs interfere” in government and science, the Islamic world “shall make no progress”.

Abduh reportedly once said that in the West he had seen Islam – progress, equality, liberty – but no Muslims, and in the East Muslims but no Islam.

While conservative clergy continued to exert influence in the Islamic world, many religious thinkers were calling for change. In Iran the Bahá’i movement challenged old orthodoxies: poet and theologian Quarrat al-Ayn called on people to “cast off the garments of old laws/ Of outworn traditions”, and gained notoriety for removing her face veil at a religious conference. De Bellaigue writes of a “struggle between faith and reason”, but his book reveals something more complex: “Is there another place like Paris,” Rifaa wrote, “where the suns of knowledge never set/ Where the night of unbelief has no mornings/ . . . Is this not the strangest of things?”

Religious reform went to the top. The Grand Mufti of Egypt, Muhammad Abduh (“Islam’s great liberal”) advocated inter-faith co-operation, and issued fatwas permitting all sorts of necessities for Muslims in modern societies, from insurance to interest accounts, shopping at Christian butchers to wearing sun hats. Too many Muslims, he argued, rejected change out of blind adherence to tradition, exactly what ancient unbelievers were criticised for in the Koran. Abduh reportedly once said that in the West he had seen Islam – progress, equality, liberty – but no Muslims, and in the East Muslims but no Islam.

Many Islamic reformers greatly admired Europe, viewing the Renaissance and the Enlightenment as extensions of medieval Islam’s great advances: “the masters are surprised by the brilliant career of their disciples”, wrote one pamphleteer in 1803, and “are in sore need of them”. Mirza Saleh praised England’s journey out of “a state of ignorance”, Sinasi’s Young Ottoman colleague Namik Kemal saw London as “the model of the world”, and the feminist writer Zainab Fawwaz (rather generously) applauded European gender equality.

Rifaa al-Tahwati, father of the nahda (renaissance), translated thousands of foreign works into Arabic. But modernisers did not want simply to emulate Europe: Kemal advocated a specifically Islamic modernity, deriding Ismail Pasha’s Egyptian assembly as following “the crack of the gendarme’s leash”.

Western support of reform, de Bellaigue notes, was mostly “insincere” cover for imperial ambition. Western imperialism had a defining influence on the “Islamic Enlightenment”. When Ahmad Urabi led an Egyptian revolt in 1879 (“We are not slaves,” he asserted), Britain expanded what would become nearly a century of “oversight”. After the Great War, British and French officials sliced up the Middle East with pen-strokes. In the 1920s, the French destroyed Damascus and the British brought “air policing” to Iraq. The scars would linger.

Advocating a more “balanced and coherent vision of world history”, de Bellaigue could have gone further

The “inevitable” response to this was the growth of Islamic movements opposed to the West and its allies, various strands of “Islamism” that began as avowedly pro-modern. Jamal al-Din al-Afghani – a charismatic polymath who “intrigued” everywhere from London to Moscow to Calcutta – argued that the Islamic world could only resist colonialism with unity and radical modernisation. Egyptian intellectual Qasim Amin saw the need to modernise in explicitly Darwinian terms: westerners “seize the wealth of any country weaker than them”.

The great Muslim states moved not to liberal democracy but royal dictatorship, colonial rule or military nationalism. Many of de Bellaigue’s amazing cast of characters ended their lives in exile, or thwarted in thoroughly modern ways: religious conservatives brought down Abduh with a (possibly faked) media sex scandal. Under repressive autocracy, Islamism would later take more radically reactionary directions. Nimak Kemal lamented that “we have no greater enemy than ourselves”.

Advocating a more “balanced and coherent vision of world history”, de Bellaigue could have gone further, asking whether western ideas of “Enlightenment” still mislead us into viewing history as a Whiggish march of “progress”. Comparison would show that “modernity” was late-blooming and contested in Europe too. This fascinating book prompts us to question how we think about the world, and challenges those in West and East who peddle the dangerous myth of civilisational conflict.

Dr Christopher Kissane is a historian at the London School of Economics & Political Science, and a BBC/AHRC New Generation Thinker.

Greed film review: Greed is quite good. But it could be better
5