The Hidden Keys by André Alexis review: a playful tale of farce and danger 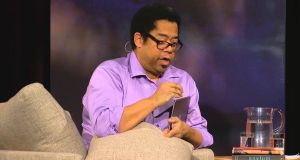 In 2015, I chaired the jury for Canada’s most prestigious literary award, the Scotiabank Giller Prize. A strong shortlist provided a popular winner in André Alexis’ Fifteen Dogs, a philosophical and moving novel that found the gods Apollo and Hermes seated together in a Toronto bar, debating the nature of consciousness and questioning whether animals would benefit from the gift of free will. Unable to reach a conclusion, they granted self-awareness to 15 dogs housed in a nearby kennel, then watched as the animals gradually adapted to their new circumstances, to an appreciation of art and poetry and a desire to make more of their lives than they had before. It was a profound piece of work, fully deserving of its win.

Fifteen Dogs was the second in an ongoing literary project that Alexis is calling his “quincunx”, five novels that employ forgotten or abandoned literary forms to create contemporary stories. The first, Pastoral, was exactly as the name implied while Dogs was an apologue. The third in the sequence, The Hidden Keys, is a quest or adventure novel and there is still a ghost story and a romance to come before this ambitious and intriguing series is complete.

The novel opens with a young Canadian thief, Tancred Palmieri, making the acquaintance of Willow Azarian, a multimillionaire heroin addict who presents him with a challenging task. Willow and her four siblings have been left enormous fortunes by their late billionaire father but she remains convinced that there’s more money secreted in a hidden location that remains unaccounted for.

The basis for her belief is the fact that her father Robert, who loved puzzles, also left a memento mori for each of his children, a framed poem, a model of Frank Lloyd Wright’s Fallingwater, a painting of the Emperor Nero, a bottle of Aquavit and a Japanese screen. Willow is sure that each of these bequests has a particular significance and, when placed side by side, will reveal their secret to a mind sharp enough to decipher it. Her siblings, however, think that these are nothing more than the delusions of a drug-addled lunatic and refuse to part with their belongings, which leaves her with no choice. She needs to hire Toronto’s best thief for the job.

What follows is an amusing and unconventional tale of robbers, pickpockets, low-level mobsters and tenacious detectives as Tancred breaks into each home to find the pieces with the intention of solving the mystery, which contains such a degree of complexity to do with numbers, clandestine graves and mysterious letters that it would put Dan Brown to shame.

The Hidden Keys put me in mind of one of the great British novels of the 1990s, Jonathan Coe’s dazzlingly byzantine What a Carve Up! which also features an eccentric family, a secret inheritance and a naïve but likeable protagonist who unexpectedly finds himself causing chaos within their circle. Alexis’ book is not quite as ingenious as this but there are moments of peculiarity scattered throughout the story that bring it close. Using cinematic techniques, he occasionally pauses the action, providing a prequel-like scene to the one that has just taken place that lends the novel the same structural playfulness that continues to define Coe’s work.

The mystery of the five gifts becomes less central to the action as the novel progresses, with the focus switching to the various criminals attempting to out-do each other. The novel proves less effective here; having Tancred stealing each of the objects in consecutive chapters would have lent the book more efficiency and clarity. However, there’s no denying the sheer fun of the story, which races along with the irrepressibility of an Ealing comedy, blending farce, danger and oddball philosophy with ease.

While the ambition that lies behind these five novels is admirable, Alexis has pointed out that there are elements of each that will only become clear when the entire sequence is complete. Along with Rachel Cusk’s Faye series, the first of which, Outline, was also shortlisted for the 2015 Giller Prize, and Edward St Aubyn’s Patrick Melrose novels, the greatest pleasure of all might come from an eventual anthology edition. If so, that’s something to look forward to but in the meantime the individual books certainly merit attention.