Galway author’s debut won the Baileys Women’s Prize for Fiction and Desmond Elliott Prize earlier this year. Sequel is to be published next April 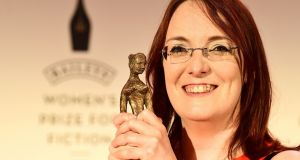 Lisa McInerney with the prestigious Bailey’s Women’s Prize for Fiction for her debut novel,The Glorious Heresies, which she is to adapt for TV. “I’m so thrilled to be working with Fifty Fathoms and Julian Farino on adapting The Glorious Heresies for the screen. Champing at the bit, even,” McInerney told The Irish Times. Photograph: PA

The Glorious Heresies, Lisa McInerney’s Baileys Women’s Prize for Fiction-winning debut, is to be made into a television series.

The Bookseller trade magazine revealed today that the rights have been bought by production company Fifty Fathoms, which has worked with writers including Jack Thorne, who wrote the play script for Harry Potter and the Cursed Child, and has developed projects for the BBC, Channel 4, ITV and Sky, and has a deal to develop further series for Sky Atlantic.

Julian Farino, responsible for shows such as Entourage, will direct and executive produce the series adaptation of The Glorious Heresies, which he said was “made for the screen”, with McInerney responsible for adapting her novel.

McInerney said: “I’m so thrilled to be working with Fifty Fathoms and Julian Farino on adapting The Glorious Heresies for the screen. Champing at the bit, even. It’s really a rare thing to get the opportunity to work with talented and passionate people who share the same vision, and I can’t wait to get cracking."

Asked who might play the lead roles, the author said: "No idea or tips or anything on who might be cast. Some Corkonians, hopefully. Speculate away! I wonder what Cillian's up to these days..." Peaky Blinders star Cillian Murphy, from Douglas, Co Cork, is an obvious candidate.

Farino said: “The Glorious Heresies has a terrific ensemble of original characters, all of whom have compelling journeys, making it ideal for a classy television series. Not only does Lisa write with edge and compassion, but her dialogue and sense of rhythm is hugely cinematic. Her material is made for the screen.”

Biting, moving and darkly funny, The Glorious Heresies explores salvation, shame and the legacy of Ireland’s twentieth-century attitudes to sex and family. Set in Cork’s seedy underbelly, and rich in local dialect, it is the story of how one messy murder affects the lives of five misfits who exist on the fringes of Ireland’s post-crash society.

Joseph O’Connor wrote in his Irish Times review. “This is a big, brassy, sexy beast of a book... McInerney is a truth-speaker and a powerful storyteller who writes with exactly the sort of furious energy this novel needs... an accomplished, seriously enjoyable and high-octane morality tale, full of empathy, feeling and soul.”

The Glorious Heresies won the £10,000 Desmond Elliott Prize in June, a fortnight after being being awarded the £30,000 Baileys Women’s Prize for Fiction. International deals so far been done in Spain, France, Holland, the Czech Republic, Denmark and Italy.

Reflecting on that win, the author said: “It feels shocking, validating and very humbling and I’m not sure yet what it means, except that it’s a boost, for me and I think – I hope! – for working-class stories, for stories that aren’t always centre-stage in literary fiction.”

Mark Richards, McInerney’s editor at John Murray, asked by The Irish Times what attracted him to her work, said: “The first thing was its energy – the novel starts with a bang, and doesn’t let up. It’s also very funny, a quality that’s both underrated and sadly missing in far too much fiction. And she’s got the most brilliant way with characters; all of them leap off the page and stay in your head (and heart).

“I suppose, on the freedom with words and big characters, there are obvious comparisons with Patrick McCabe and Irvine Welsh. But if I’m honest the work I’ve most frequently compared her novel to is Shameless. Though set in Cork and with more violence, it’s just as funny and just as true.”

McInerney, 34, wrote the award-winning blog, Arse End of Ireland, which led to her being named “the most talented writer at work today in Ireland” by The Irish Times. Her short story, Saturday, Boring, was included in Faber’s Town and Country anthology of new Irish short stories in 2013, edited by Kevin Barry, an early champion of her work. McInerney’s second novel, The Blood Miracles, which she describes as “a sort-of-sequel to Heresies in that it works with some of the same characters and it’s set in Cork”, the second part of a planned trilogy, will be published by John Murray next April.