As in her short story Berghain, it is striking how forcefully Lisa McInerney can write from a male character’s perspective about experiences not often explored in fiction 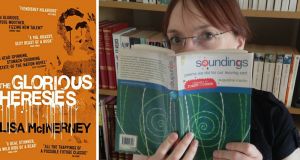 With powerful wit and insight, Lisa McInerney weaves a story of the underbelly of society, exploring the ways these individuals are hampered by their country’s social system and religious traditions

Looking at the Baileys Prize longlist, one of the novels I was most excited to see was by Lisa McInerney who I had read recently in the brilliant anthology of Irish women writers, The Long Gaze Back. Her story, Berghain, is full of spit and fire as it follows a young man’s drug-fuelled night out. It struck me as so forceful how she wrote from a male character’s perspective about experiences not often explored in fiction.

Her direct style and subject matter is reflected in this novel, The Glorious Heresies, about the lives of several struggling individuals in modern-day Cork. At the beginning of the novel, we meet 59-year-old Maureen who has just murdered a man in her apartment. Her gangster son Jimmy calls upon his estranged old friend Tony to help him clean up the mess. Several people are drawn into this incident and its consequences reverberate through their lives over a number of years. At the heart of this novel is Tony’s teenage son Ryan, who struggles to find his place in this post-financial-crash Irish community. With powerful wit and insight, McInerney weaves a story of the underbelly of society, exploring the ways these individuals are hampered by their country’s social system and religious traditions.

There is a lot of bad behaviour in this novel and a good amount of cursing. Though the characters aren’t excused from participating in folly that leads to violence, substance abuse and antisocial behaviour, the author shows how their choices are inhibited by the society they live in. A prostitute leans on drugs and alcohol to distract from the hate she receives from clients. A boy acts out at school because nobody notices the mental and physical abuse he receives from his father. A mother sets a church on fire many years after being forcefully separated from her baby born outside of wedlock. A single father commits heinous acts to protect the six children he struggles to raise and support.

Through Ryan we see how a boy with intelligence and artistic promise (he’s a talented piano player) is slowly drawn into a life of crime and gang violence. He needs nurturing, but his development is perverted by abuse from both men and women. His tenderly drawn relationship with his girlfriend is slowly warped. What’s worse is that he’s aware of his life falling into cliches so that “The predictability of his transformation hurt him terribly. He hated it.” Yet, as badly as he’d like to escape his circumstances he’s unable to break out of them because of the relationships he’s locked into and institutions like the court, school and church that fail to see how vulnerable he really is.

Of course, as difficult as life is for the men in this book, life is even harder for women. It’s explained how “they divide up the women into categories,” said Maureen. “The mammies. The bitches. The wives. The girlfriends. The whores. Women are all for it too, so long as they fall into the right class. They all look down on the whores. There but for the grace of God.” The prostitutes are at the bottom of the social ladder and suffer the most. The character of Tara Duane, who used to be a prostitute, is a particularly interesting character as someone who tries to be savvy and gain leverage in the community, but ultimately fails and participates in abusive behaviour as she’s convinced of her own righteousness.

Most fascinating of all is Maureen, who has strong independent opinions and exists in a privileged place as the protected mother of a feared gangster. As someone who has returned to Ireland after living in England for many years, she can see the corruption and hypocrisy from an outsider’s perspective. She realises she’s made mistakes but she sees clearly how the church has hoarded power and abused its position.

At one point she has this powerful confrontation in a confessional booth: “Oh, Father. I know I’m sorry. What about you? Bless me, Ireland, for I have sinned. Go on, boy. No wonder you say Holy God is brimming with the clemency; for how else would any of you bastards sleep at night?” She’s someone who has entirely lost any faith in the church and its ability to heal: “there’s nothing there. No confessor, no penitent, no sin, no sacrament. Just actions to be burned away.”

There is a strong disregard for the symbolic powers the church once possessed as in one scene where a runaway prostitute Georgie sniffs cocaine off a bible and observes that these books are “Mass produced and made of dead trees; there’s nothing special about them.” The ferocious anger for the way religion has failed to support people when they are at their most vulnerable is palpable throughout the book.

The Glorious Heresies is an energetic and dynamic story, depicting members of society who aren’t often given a voice. For this reason, McInerney’s writing reminded me of books by Kerry Hudson and, for the way it depicts communities entrenched in violence it reminded me of the LA novel, All Involved. It speaks of the challenges the current generation faces while showing an understanding of the weight and influence of the past. In fact, the past continuously bleeds into the present as a character named George observes “We’ve more history than we’re able for.”

Instead of looking to the age-old institutions for support and inspiration the newer generation’s experience is refracted through video games or popular TV shows like The Sopranos or The Walking Dead. McInerney writes powerfully about issues affecting us here and now. I felt drawn into her characters’ lives and tremendously moved by this strikingly forceful novel.

The Glorious Heresis is published in paperback by John Murray, at £8.99. As always, Hodges Figgis is offering a 10 per cent discount to Irish Times Book Club readers. Come and listen to Lisa McInerney read from her novel and discuss it with Martin Doyle, Assistant Literary Editor of The Irish Times, at the Irish Writers’ Centre, Parnell Square, Dublin, on Thursday, March 24th, at 7.30pm. Tickets €5/€3 in advance, or €7 on the door, to include a glass of wine.