The evolution of storytelling: an overview

Debut author Paula McGrath explains why she loves making connections and the linking of multiple perspectives, both as a reader and a writer 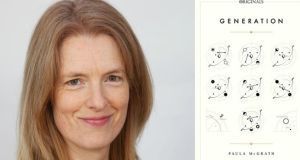 Paula McGrath: Well-versed in a range of narrative methods from literature and film, the modern reader is used to making jumps in time and space, and filling the interstices between

Unless you’ve been living under a rock you will have noticed that the short story is enjoying something of a resurgence. I love short stories, and felt very fortunate to have Éilís Ní Dhuibhne, one of the best practitioners of the form, as my MFA tutor. She was partly the reason why, when asked what I was working on for my thesis, I announced that I was writing a collection of short stories. This was a lofty declaration, considering I had written only one decent short story to date, about a squabbling German couple with a baby, as observed by Joe as he tended his farmers’ market stall in Chicago.

I was persuaded to write more about Joe, but because he was an enigma who didn’t like to give anything away, I did so from the perspective of Yehudit, his mother. Carlos, his Mexican employee, got a story next. Gradually, the book began to grow, and, while the stories themselves maintained their autonomy – fulfilling the short story criteria of concentration and limitation, and Edgar Allen Poe’s famous “unity of effect” – new stories and characters persisted in making connections to the first story, and to each other. It was beginning to look a lot like a linked collection.

But the links became more numerous, and then one story took off and couldn’t seem to stop. When it crept past The Dead’s 15,000-odd words, I decided it was time I did the research. Novels-in-stories, short story cycles, composite novels, polyphonic novels. Whatever these sort of books were called, it had become clear that I was heading into novel territory. I investigated my bookshelves and, sure enough, it was territory I was familiar with: Amy Tan’s The Joy Luck Club, Anne Tyler’s Dinner at the Homesick Restaurant, Colum McCann’s Let the Great World Spin, David Mitchell’s Cloud Atlas, Elizabeth Strout’s Olive Kitteridge, Jennifer Egan’s A Visit From the Goon Squad were all there, to name just a few.

I liked these sort of books, and had long been attracted to them. But what was this attraction to novels which managed to be both disconnected and linked, to somehow contract and expand at the same time? The American author Michael Chabon says that they can “create an effect you can’t get from a novel or from one story alone”, and I agree, but what was this effect?

Around the time that I was searching for solutions to my formal dilemma, Commander Hadfield began tweeting his stunning photos from space, presenting us with unimaginable views of ourselves, and I was helpfully reminded of Robert Altman’s Short Cuts, the 1993 film based on Raymond Carver short stories and transposed to LA, where ever-present medfly-spraying helicopters hover over characters whose lives intersect only loosely. I remember coming out of the cinema thinking: so that can be done.

In the 19th-century novel, omniscient narrators knew the thoughts and feelings of all of the characters. In Pride and Prejudice, for example, Jane Austen focuses on her protagonist, Elizabeth, but her narrator delves into the minds of many of the other characters, as well as maintaining an overview which might be read as Austen’s own voice. Then, for a variety of reasons – Darwin’s theory of evolution, perhaps, or the Great War, both of which added to the collapse of the idea of absolute knowledge and the rise of the individual – the all-knowing, god-like narrator fell out of use. To paraphrase the critic James Wood, the standard third-person omniscient narration had become a kind of “antique cheat”.

Other modes of narration grew in prominence, including fragmented tests, multiple perspectives, and the linking of multiple perspectives. Alternative methods of providing an overview were sought, and these could be combined with linked multiple perspectives to create a whole greater than its parts. The helicopter achieves this overview in Short Cuts, the tightrope walker in Let the Great World Spin. Adam Johnson uses a drone in his EFG Award-winning story, Nirvana. In my novel, Generation, overview is provided through the uranium mines and space race of the opening chapter (and the allusion to Commander Hadfield’s tweets that I couldn’t resist), and the circular return to the mine at the end.

But, with all literature, overview is ultimately provided by the reader, and it would be a mistake to underestimate what she is capable of. Well-versed in a range of narrative methods from literature and film, the modern reader is used to making jumps in time and space, and filling the interstices between. This is probably the single-most reason I am attracted to fragmented texts and linked narratives; I feel a little bit cleverer when the writer trusts in my ability to traverse the narrative, however difficult.

As readers, we can zoom in to engage with the interior life of an individual protagonist, then move across to another; we can zoom out to connect these individuals to each other within the world of the novel; then we zoom out further still, where we recognise the insignificance of the characters’ concerns, and of the characters themselves – and of our own concerns and, indeed, ourselves – when viewed from a distance. But however insignificant we may appear when viewed from outer space or from the distant future, we are spared from a descent into nihilism, because we know that we still have our connections to each other, as well as to the generations which came before us, and which will come after.

Paula McGrath’s first novel, Generation, is published today by John Murray Originals in July. Her fiction has appeared in gorse, Mslexia, Surge Anthology (Brandon), and elsewhere. She has an MFA from UCD and commences a PhD in Queens University Belfast in September