The Divers’ Game: A strange and cruel world brought to life

Book review: In Jesse Ball’s new novel people can be gassed by those with more privelege 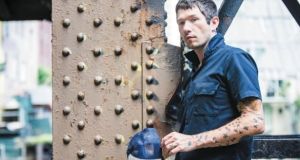 Jesse Ball: His writing has a perverse streak tempered by an innocence

Lois and Lethe, two characters in American author Jesse Ball’s affecting and strange new novel The Divers’ Game, are in many respects just like any other privileged, outspoken young people. Lois is rich, and she doesn’t question her place in society, while Lethe is cultivating a conscience and educates herself about inequality. They envy each other’s clothes and possessions, argue with lecturers about gendered language, experiment romantically with each other when no one is looking, and don’t want to grow old. They also ask each other, “Do you ever think about gassing someone?” They’re exploring what it is to be people in the world; in their world, though, people gas the less privileged in perceived circumstances of threat or even “if you just wanted to”.

After the arrival of a large amount of refugees in the recent past, the ruling class of the book’s unnamed nation decided to afford these newcomers “no legal standing as persons”. The resultant two-tier society is split into “pats” who inhabit cities, and permanent societal outsiders named quads after the “Quadrants” where they may live in a version of safety. (They can be harmed or killed for whatever reason, but in their even more lawless Quadrants they can kill pats, because it “would have happened within precivilised space”.) Quads can be distinguished by a missing right thumb and a facial brand. But what really differentiates them is not carrying gas masks, which protect pats and leave others vulnerable.

9 Fauci reveals what it was really like working for Trump

13 Blindboy Boatclub: ‘I had the choice of being a psychotherapist or a mad bastard’

19 Eat, move, think: What you need to know about children’s health (teenage girls)

22 Mary Lou McDonald: Government must be active in conversation on a united Ireland

24 ‘I worry about my child falling behind, but my own work is beginning to suffer’

25 Why should the Leaving Cert have to be ‘brutal but fair’?

27 Traveller who tried to book hotel wedding awarded €15,000 for discrimination

28 Walk this way: 17 tips for getting the most from your daily lockdown outing

33 Suzi Quatro: ‘If he’d done that backstage he’d have been singing soprano for the rest of his life’

34 We think we have enough for a deposit. Should we buy now or rent a bit longer?