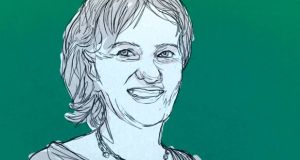 And my young grandmother,

My mother, too young, at seven months,

to remember, herself, used tell us,

she heard the horse and trap in the yard again

and could not believe her ears.

What was my grandmother doing?

Did she clear away a half-eaten Easter dinner

as she scraped jelly from a glass bowl?

Did she mix feed for hens or pigs,

or wonder about bringing cattle in for milking?

Did she pray, or take out her handwork?

Was she putting the baby down for her rest?

in the swept farmyard,

she had said goodbye

to her husband of six years,

her exiled lover of seven more,

whose letters had been carried

in steamships across Caribbean

On this Sunday morning, had they embraced

as he headed for the muster at Dungannon?

- as he enjoined her to bring up the children

as good Catholics and good Irishmen and Irishwomen.

(My mother, in old age, was to remark,

with a raised eyebrow,

Wasn’t it cool of him, all the same?)

Now, as the trap clattered in through the gate

and the horse, Rebel, halted in his familiar place,

did my young grandmother wipe her hands in her apron,

did she rush to the door?

Although the rising had been called off,

although the great cause seemed lost again,

did her heart not rejoice?