The Clasp by Sloane Crosley: Latching on to love

A comedy of manners about modern America steeped in literature 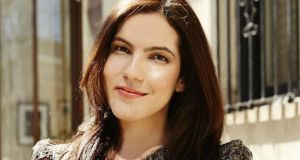 Raymond Carver called it “smoked-glass prose”, writing that is blurry or not clear in sentiment. It is the downfall of many novice writers, and some professionals, who confuse convoluted expression with complexity of thought.

The American author Sloane Crosley is no novice. Her bestselling essay collections I Was Told There’d Be Cake and How Did You Get This Number show that she can write about modern topics with precision and humour, as do her contributions to the New York Times and Guardian and her former column in the Independent.

Her debut novel, The Clasp, is a diverting jaunt about a bunch of college graduates reunited at a wedding, but its prose lacks precision. Similar in theme, character and structure to The Marriage Plot by Jeffrey Eugenides, Crosley’s novel lacks Eugenides’s care when it comes to language. Characters are introduced as “questionably a midget” or given a helping hand with descriptions that draw on popular culture. Victor, one of the book’s three narrators, is a recently unemployed young man who bears a “resemblance to the sharp-faced actor Adrien Brody”. Another narrator, the feisty Kezia, is “wan, maybe, a curly blond Wednesday Adams”.

At the start of the book, as Victor sets off to Florida for the wedding of Caroline and Felix, he notes that it’s his first time to visit the state: “Florida had simply slipped through the cracks of his adulthood like an idiom heard too late.”

Such lines – and there are quite a few – distract from an engaging read. A tighter edit could have stripped the text of these expressions, which tend to puzzle rather than enlighten. But it is to Crosley’s credit that the voices of her characters still come through. In Victor, Kezia and Nathanial, she has created three distinct voices that will resonate with the millennial generation. The Clasp is a comedy of manners about modern America.

Mirroring the two-boys-one-girl triangular storyline of The Marriage Plot, the book is similarly steeped in literature. With references from Proust to Shirley Jackson’s The Lottery, “like The Hunger Games only shorter and better”, Crosley brings her light touch to this intertextuality. The biggest literary nod is to Guy de Maupassant’s short story The Necklace, which Crosley uses as a device to launch a madcap plot in France.

An excruciating reunion atmosphere at the wedding leaves Victor drunk, maudlin and pining over Kezia, his unrequited love. Kezia, meanwhile, longs for Victor’s best friend Nathanial, while Nathanial longs only for the limelight. Escaping from the wedding party, Victor wanders upstairs and meets Joanna, the German mother-of-the-groom, who tells him about a necklace given to her by a solider in war-time France.

Joanna shows Victor a drawing of the necklace, “a fist-sized blue stone hanging from a V of diamonds and multiple cords of pearls”, not realising that he’s a relapsed kleptomaniac who can’t resist running off with the sketch. When Joanna dies a few weeks later, Victor refuses to come clean about the drawing and instead sets off on a treasure hunt to France.

The plot is borderline ludicrous, with the suspense elements of the hunt glossed over by Crosley. The focus instead is on the characters and their various journeys. Three-dimensional and satisfyingly different from each other, the narrators give sharp and sardonic perspectives on the various cultures they encounter.

For all his ego, Nathanial’s sense of humour will help to win over readers. The absurdities of the LA acting world come to life, as does his struggle as a screenwriter: “His highest paying gig was punching up an animated web series about ayahuasca produced by Darren Aronofsky’s cousin.”

Depressed and antisocial after he loses his job, Victor is sympathetic from the outset: “He was becoming an old man – oversensitive to street traffic, muttering snide comments to people who were not self-aware enough for his liking.” Kezia is another interesting character, irritable and intelligent, both desiring of and repelled by intimacy. The everyday prejudices she faces on account of her name are deftly shown, particularly through a humorous set-piece in Paris with a cantankerous jeweller.

Much of the book is given over to discussions of The Necklace and Maupassant himself. At times it works, as when an older female professor bares her soul on discussing “how little it takes to doom or save you”, but elsewhere biographical passages on Maupassant seem superfluous and the significance of his short story to the lives of these contemporary characters appears forced for plot.

In an unnecessary introduction that explains the importance of the Maupassant piece, Crosley says that her novel is “about the idea of reaching, of latching and unhinging again”. For all its artifice, this concept is neatly conveyed through her characters’ stories. Skim over those smoked-glass stones and there are hidden gems within.