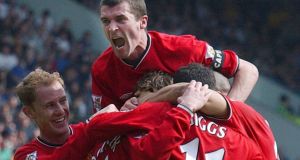 Roy Keane celebrates with Manchester United team-mates in 2002. Sam Walker argues that while Keane provided towering leadership on the field of play, his fiery and unrepentant streak hurt the teams he led in other ways. Photograph: PA

Book Title:
The Captain Class: The Hidden Force Behind the World’s Greatest Teams

In the early pages of this wonderfully strange and absorbing study of what drives great sports teams, Sam Walker makes a point that should halt both the rank-and-file and the burningly ambitious in their tracks.

“One of the great paradoxes of management is that the people who pursue leadership positions most ardently are often the wrong person for the job.” It has proven true time and time again from government to business to sport: flick through the recent history of any strand of Irish life for proof.

The contradiction runs through the heart of this quixotic and obsessive attempt to grapple with the common traits of truly great sports teams throughout the world. Walker, now the Wall Street Journal’s deputy editor for enterprise, previously served as the publication’s sports editor. His previous book, Fantasyland, was also pleasingly off-the-wall, chronicling his attempt to win America’s fantasy baseball league. The charm of The Captain Class lies in Walker’s success in presenting a kind of impossible sports argument common to both 10-year-old children and 80-year-old cynics in the dress suit of academic thesis, anecdote, statistical data combined with a decade of research and unashamed sports-geekery. He explains the clear set of rules he established in defining “the world’s most elite teams” and in a fascinating appendix at the back, he generously details the teams that didn’t quite make his list of 16.

From a local perspective, it is disappointing that the Kilkenny hurling team did not make the cut: Walker acknowledges that Gaelic sports enjoy big spectatorships but eliminated them on the grounds that they did not qualify in the “major sport” category. “The trouble is that the countries that adore them just aren’t very big.”

The project originated in an article Walker had planned, following the improbable success of the 2004 Boston Red Sox in baseball’s World Series, to be called “The Secret Lives of Elite Teams”.

He started digging, found himself lost in a decade-deep rabbit warren, and was forced to confront the evidence that what bound these all-time teams together was not the coach nor their tactics nor their star player. It was blindingly simple. It was their captain. It was their leader. So Walker’s project became a series of forensic profiles in leadership.

The result is informative, persuasive and great fun for anyone not only with a passing interest in sport but in mankind. The people involved – Barcelona’s Carles Puyol, Bill Russell of the 1950s Boston Celtics, Carla Overbeck of the US women’s soccer team – emerged from different sports and cultures, but their shared traits included a near-hostility to fame and celebrity, a ceaseless work ethic and a willingness to do anything to further the team. (Valeri Vasiliev, the folk hero of the 1980s Soviet Union hockey team, played through a heart attack and threatened to throw the team coach off an aeroplane for criticising individual players.) They were rarely the best players and seldom gave big emotional speeches but talked constantly during games.

Most importantly, Walker demonstrates how the superstars were often reliant on the captains: they facilitated in ways that were invisible.

The anecdotes take readers on a whistle-stop tour through world sport in the 20th century. It is just a shame that the publishers, in what is a lavish production, didn’t include photographs of the captains in their prime.

Roy Keane’s magnificent turn in Juventus in the Champions League semi-final of 1999 is lauded here. But the Cork man does not quality as a great captain in this analysis: in fact, he shares with basketball god Michael Jordan a chapter titled “False Idols: Flawed Captain and Why We Love Them”. Walker argues that while Keane provided towering leadership on the field of play, his fiery and unrepentant streak hurt the teams he led in other ways.

For example, when, in 2009, Philip Lahm explicitly disobeyed Bayern Munich club rules by orchestrating a newspaper interview to air his unhappiness at how the team was performing, he limited his criticism to just that. Lahm, as captain, was hauled over the coals. Rebuked, he invoked the fury of his team-mates and then Bayern won nine of its next 10 matches and claimed the Bundesliga title.

When Keane, recovering from a foot injury in November 2005, decided to spur his team-mates on, his observations were, Walker writes “aggressively personal” and he was famously gone from United within the week.

Michael Jordan, he points outs, won his first NBA championship only when he shared the captaincy with Bill Cartwright, a quiet,7ft career veteran with a morose expression: the anti-Jordan. It’s an argument that doesn’t fully convince: Cartwright’s leadership may well have helped, but a more obvious explanation for Jordan’s previous failure to win titles was that he was thwarted by extraordinary teams in the Boston Celtics and Detroit Pistons, who were breaking down by 1991, when Jordan began to reimagine the game.

But this is exactly the sort of debate and counter-argument that The Captain Class is designed to provoke. And if it prompts coaches at all grades not to pick the star, self-appointed or otherwise, as automatic captain then it will also serve a valuable social purpose.