Terry Wogan on Frost: That Was the Life That Was - Review

The late journalist, satirist, TV host and friend to all-important people is given an upbeat tribute in this celebrity-saturated biography 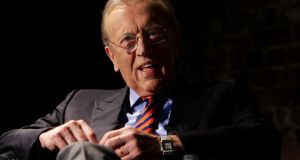 Book Title:
Frost: That Was The Life That Was: The Authorised Biography

Sir David Frost, raconteur, satirist, presenter, interviewer and everybody’s friend. And mine, although I failed to make the cut in the last few pages of acknowledgements to friends in Neil Hegarty’s biography of the great communicator. The list of the great and good of British life takes up a page and a half, but it could have filled a book on its own.

Elsewhere, the reader will find copious references and pictures of not only the great and the good, but the biggest beasts who were happy to call David friend: George W Bush, Bill Clinton, Tony Blair, Margaret Thatcher, Harold Wilson, Richard Nixon, of whom more anon.

Frost’s friendship with the royal family and the respect and affection in which they held him were apparent when Prince Charles laid flowers at David’s memorial stone in Poets Corner at the funeral in Westminster Abbey.

Even though we all knew Frostie was the confidant of anybody worth knowing on the planet, he could still surprise. Richard Ingrams, founder and former editor of the satirical magazine Private Eye, remembers standing next to David at a party when the Frost phone rang. “Hello! Boutros Boutros! How are you?” was Frost’s cheery greeting.

Ingram, hardened old cynic, did admit to a passing admiration that the then secretary general of the United Nations had time to give his pal a friendly call.

For that was Frost’s great gift: his ability to make friends. His trademark television greeting of “Hello, good evening and welcome!” was no less effusive than his greeting of friend, foe and complete stranger, away from the studio lights. The same cheery insouciance, making the recipient feel that they were the only one in the whole wide world that mattered to David Frost at that particular moment.

In a business in which insincerity is a watchword, his warmth shone through. When he greeted you, he looked you in the eye, unlike many less stellar “celebs” who, even as they shake your hand, are looking over your shoulder to check whether anyone more important has come into the room.

There’s plenty of evidence here of David’s entrepreneurial ability, his bravery at taking not just professional, but financial risks in pursuit of his dreams, his inspirational encouragement of fellow artists, the business brain that involved him in the birth of television companies, the creativity that inspired so many ground-breaking television shows. These were not the passing whims of the classic showbiz butterfly brain. His agent, Richard Armitage, once told me that of all the major artists on his books, David was the only one who didn’t just sign on the bottom line, but insisted on reading the contract from cover to cover.

David Frost’s family were the only ones among a myriad of friends, acquaintances and the public that he ever let beyond what the ancient Greeks called herkos odonton – the hedge of teeth.

The son of an outgoing Methodist minister, Frost sailed through a happy childhood, passed his exams at grammar school and onwards, inexorably, to Caius College Cambridge. His undistinguished academic career disappointed his family, his tutors and his old school headmaster, but he wasn’t there to waste his time on study. As Hegarty points out, David was on his way, via the famous Cambridge Footlights, to the glittering prize of television.

His shameless and obvious focus on fame and fortune was not in the best British tradition of student self-deprecation, and it caused a certain snobbish resentment among his peers. Though not Sir Ian McKellen, a contemporary at Caius and fellow grammar schoolboy: “David regarded Cambridge as a staging post, and unlike the rest of us, he had a game plan.”

Others never forgave Frost for reaching so relentlessly for the stars, and leaving them in his wake.

At the memorial for Peter Cook, regarded as the outstanding talent of the Footlights crew, but who seemed to burn out after his split with Dudley Moore, Ingrams (another old Oxbridge man) recalled Cook’s dismissal of Frost’s invitation to dinner: “Sorry, David, I’m watching television that evening.” He also recalled how Cook always claimed that his biggest regret was saving Frost from drowning in America.

David lived in the limelight, and loved it, and this book chronicles not just his triumphs but his disasters as well. From the sensational successes of That Was the Week That Was and The Frost Report to the failure of TV-am. On the latter Frost and his carefully picked team of superstars – Parkinson, Ford, Kee – were knocked out of the ballpark by Selina Scott’s big hair and Frank Bough’s cardigan on the BBC’s Breakfast Time.

He still flew back and forward on Concorde to New York, out of habit more than anything, always enthusiastic, delighting in telling friends of the stewardess apologising, “Sorry, Sir David, I’m afraid it’s caviar again”.

He wouldn’t have thanked you for caviar anyway, according to his son Wilfred. He preferred good plain food and a cigar. He was the worst cigar-smoker I ever saw in my life. He didn’t smoke his Havana, he chewed it. The Frost parties were legendary, whether it was just a cottage-pie lunch and football afterwards with the boys at his home in the country, or a dinner in their London house, or a grand “do” at Arundel Castle, the home of Carina’s father, the Duke of Norfolk.

Their London Home in Chelsea square held one of the year’s great social occasions: David Frost’s annual summer party gathered together the very cream of the media, political and anyone-who-thought-they- were-anybody crop. In they’d come to Carlyle Square, at the great one’s behest, by taxi, limo and, more likely, bus or Underground. (The nearest parking was miles away on the Embankment.)

David greeted all as if he knew everyone intimately. Rory Bremner tells of being called to the host’s side through the milling mob. “Ah Rory,” welcomed his genial host, turning to a tall figure by his side, “I want you to meet . . . This is . . . ” The great communicator had a senior moment.

After a chilly pause, the other guest turned on his heel and moved away. “Who was that?”asked Bremner. “Oh, God!” said Frost, with a typical hoot of laughter. “King Constantine of Greece!”

It seemed as if a major hiatus had slowed the Frost machine down. But, as ever, fortune favoured the brave, and his apparently forgotten historic interviews with disgraced Richard Nixon were revived not on television, but on the stage. In no time at all, Frost/Nixon was an enormous hit on the West End and Broadway. A film followed to critical and popular acclaim, and Sir David Frost was back in the glare of the footlights, where he always belonged.

Everybody’s friend was alone when he died, far from his loved ones, inexplicably, on a short cruise to Portugal on August 31st, 2013.

Frost’s family walked proudly behind his coffin as it made its stately progress in Westminster Abbey, and followed by members of the royal family, the government, the Lords and the church. Heartfelt tributes were paid by family and friends as he was laid to rest in Poets Corner.

Nobody begrudged Frost the great honour. For, in the words of Shakespeare, “he bestrode our narrow world like a colossus”.

Those Were the Days, Terry Wogan’s debut short story collection, is published on October 8th by Macmillan