Tale of yawning animals is the perfect bedtime treat

Reviews: ‘Goodnight Everyone’, ‘Nothing!’, ‘A Child of Books’, ‘The Bone Sparrow’ and ‘Non Pratt’s Unboxed ’ 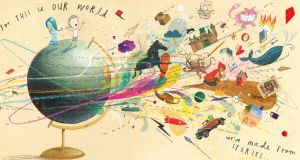 A Child of Books, by Oliver Jeffers and Sam Winston, celebrates the joy of reading and has the feel of a classic

While adult readers are more likely to pack a Kindle in their holiday suitcase than a stack of books, younger audiences have proved more resistant to digital books and, strangely in agreement with purists, think that ebooks just “aren’t the same”.

Picture books, in particular, tend not to translate well to the screen (although there are some clever interactive apps inspired by different titles); these are works designed for page-turning rather than clicking or swiping.

Chris Haughton’s latest title, Goodnight Everyone (Walker, £12.99) is a perfect example – as the sun sets, everyone in the woods is getting sleepy, and pages of varying widths are layered together to reveal a different group of animals each time.

Little Bear is the only one not tired but, as more and more yawning animals are revealed, Little Bear joins in – and a young listener hopefully will, too.

In a nice move, neither Little Bear nor Great Bear is given a gender, facilitating any child to imagine themselves and the kind adult in their lives into these roles.

Haughton’s block illustrations are simple but striking, with beautiful maps of the night sky just inside the covers: the visual equivalent of a warm blanket and an ideal bedtime read.

For daytime, Yasmeen Ismail’s new picture book, Nothing! (Bloomsbury, £6.99), is bright and energetic, depicting the wonderful fantasy life of its heroine.

Lila is too busy to put on her shoes and coat – she’s battling an evil octopus, prancing around with an elephant, or turning into a giant.

Her response to her mother’s constant question of “What are you doing?” is an innocent “Nothing!”, which takes on new resonance when she discovers her grandfather shares her passion for make-believe.

This is a playful read for anyone who’s ever been in trouble for daydreaming, with Lila’s exuberance represented well by Ismail’s bold and colourful illustrations.

A Child of Books by Oliver Jeffers and Sam Winston (Walker, £12.99) is another beautiful title celebrating the power of the imagination and, in particular, the joys of reading.

The narrator introduces herself as a “child of books”, from “a world of stories”, and some of these stories are woven into the images.

She floats on waves composed of excerpts from Robinson Crusoe and Gulliver’s Travels, walks a path composed of Alice’s Adventures in Wonderland, and sleeps on clouds made of nursery rhymes.

There are 42 titles in total, offering up narrative layers to a simple tale that may go unappreciated by very young readers, but will delight older ones.

There’s also a rather delightful satirical newspaper, “Serious Stuff”, read by someone who has forgotten how to use his imagination and have fun, opening with “A group of serious people passed on concerns about a serious document that has been lost by a serious organisation.”

This is a book that rewards reading the small print.

A Child of Books is the first – and, hopefully, not the last – picture book collaboration between Jeffers and Winston, and already has the feel of a classic.

We can forget sometimes just how much picture books are works of art: this is a reminder of how stunning they can be.

Flip the pages of Zana Fraillon’s The Bone Sparrow (Orion, £12.99) and the tiny bird in the bottom right corner will fly.

It’s a light touch in a book for older readers that is all too painful and all too real – a depiction of life as a young refugee, who has never known anything outside the barbed wire of his detention centre.

Subhi’s friendship with Jimmie, a girl outside, has echoes of John Boyne’s The Boy in the Striped Pyjamas, but there is no fairytale feeling here to make it more bearable.

This is very much our world now, where Subhi and his family are invisible to those outside, like “dead rats”.

Throughout the novel, Subhi and Jimmie read stories and the importance of telling your own story – which includes Subhi speaking up about a horrific incident he’s witnessed – is emphasised.

Stories can change how people think, and this book aims to do just that. It is a plea for empathy and understanding, a reminder that refugees deserve compassion rather than punishment.

A difficult read but an important one, with an afterword from the author explaining the facts behind her fiction.

With French flaps and a glittery cover, Non Pratt’s Unboxed (Barrington Stoke, £6.99) is immediately visually appealing, and no surprise there: Barrington Stoke specialise in making reading more attractive, and easier, for reluctant or struggling readers.

Their pages are slightly tinted, and all of their books use a dyslexia-friendly typeface and wide spacing.

Authors publishing with them have already written “mainstream” titles and, despite the language being kept simple, the subject matter is suitable for the age group.

(Perhaps “unsuitable” is a better word when depicting teenagers in an authentic fashion?)

In Unboxed, Alix and her old friends reunite after five years of drifting apart, brought together by a request from the now-deceased Millie.

“Death was something that happened in other people’s stories,” Alix reflects, not her own, and Millie’s absence haunts each of the characters as they break into their old school to find and open a memory box from that summer of friendship.

This is a superb look at how teenage friendships can change over the years, and the secrets people keep from one another.

Although it’s much shorter than most YA novels, it still packs an emotional punch, and is an ideal one to hand to struggling teenage readers, who deserve readable and compelling stories about adolescence.

Claire Hennessy’s latest YA novel is Nothing Tastes As Good. She also works as an editor and creative writing facilitator