Stuart Neville: The twist is dead – long live the twist

Ahead of the Dead in Dún Laoghaire festival, the author of ‘The Twelve’, asks if crime writers have over-egged the big reveal 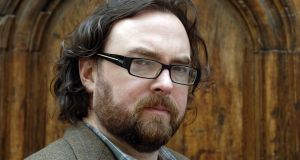 Stuart Neville: “If every week the supermarket shelves are loaded with more paperbacks with dark covers and promises of shocking secrets, how long before readers grow weary of them?”

If you’ve visited the Amazon website to browse books over the past couple of years, you will have noticed an odd phenomenon: the blurb-title. A recent example is Erin Kelly’s latest, listed on the internet behemoth as “He Said/She Said: the gripping Sunday Times bestseller with a shocking twist”.

In the case of this excellent novel, all these claims are true. It is indeed gripping, it was a Sunday Times bestseller, and it in fact has several shocking twists. But as one scrolls through Amazon’s pages, the sheer number of books with such claims of shocking revelations embedded in their titles becomes tiresome. More troublesome might be the expectation that such sales pitches build up. Can all these books deliver on their promises in the way Erin Kelly’s does?

For the purposes of this piece, we should perhaps try to define what constitutes a Big Twist. Some might consider any shocking turn in a story to be a twist, but given recent trends in popular fiction, most would understand that a twist – at least one that’s strong enough to be a book’s USP – to be some form of reversal, a shift in perspective that toys with the reader’s assumptions up to that point. At its best, this kind of leap in the narrative should force the reader to question everything that has occurred so far in the story.

The stand-out example of recent times is, of course, Gillian Flynn’s astonishingly successful Gone Girl. While it was preceded by SJ Watson’s also-twisty Before I Go to Sleep, Gone Girl is generally regarded as the book that birthed the current hot genre of domestic thrillers.

Throughout the early years of my career as a writer, everyone was speculating on what would follow in the wake of then-dominant Scandi noir, spearheaded by Stieg Larsson and Jo Nesbo. A few pundits rather optimistically predicted that the burgeoning wave of Irish crime fiction would soon be the next big thing. Annoyingly for me, they were wrong. Instead, a specific breed of thriller emerged to devour everything in its path.

More often than not, these stories hinge on a twist, some point that flips the narrative, hopefully wrong-footing the reader. If you’ve read Gone Girl (and you almost certainly have), you will know what that moment is. It’s both shocking and effective; it not only forces you to reassess what you think you know about the characters, but also sets up the rest of the story, guaranteeing that the pages will keep turning to the end.

The Big Twist is not a new phenomenon, and neither is it unique to the crime genre. Literary giant Ian McEwan’s Atonement turns on a revelation that is both surprising and heartbreaking. Sarah Waters’s Fingersmith pivots on a moment that shifts the story in an entirely different direction. We can go back to Agatha Christie’s And Then There Were None for a classic whodunit twist, or jump into the sci-fi canon with Pierre Boulle’s bookending of La Planète des Singes (Planet of the Apes) by a pair of intelligent chimps who refuse to believe a tale of civilized humans exploring the stars.

Likewise, cinemagoers are no strangers to the great reveal. When Charles Foster Kane’s dying word, Rosebud, is discovered to be the name of his childhood sled, it is a quiet and poignant moment, showing that Kane has wasted his life in pursuit of the childhood that was stolen from him. At the other end of the scale, M Night Shyamalan’s The Sixth Sense is as effective a twist as has been seen in modern cinema. It’s such a great moment that it demands a second viewing just to see those clues laid out.

Shyamalan’s oeuvre also highlights the pitfalls of a writer’s dependence on revelation, namely the weight of expectation and the law of diminishing returns. Several films into the auteur’s career, and the twist had become a millstone. Where The Sixth Sense’s final reveal lands a devastating punch, The Village’s closing scenes are predictable from the first, and render the previous 100 minutes entirely pointless.

Isn’t that also a risk for novelists who builds their reputations on the Big Twist? The pressure must be enormous to keep coming up with stories that hang on a revelation, to continuously wrongfoot the reader, while at the same time battling the reader’s anticipation of that twist.

As a reader, I have more than once had my enjoyment of a novel eroded by seeking the twist that the book was sold on. Watching out for clues to some hidden secret instead of simply enjoying the characters’ journeys is becoming an increasing peril with contemporary fiction. It’s debatable whether that is the fault of how these books are marketed, or if the authors themselves lack the skill to fully absorb the reader while leading them along a tricksy path. And is there pressure on writers from publishers to capitalise on this hot trend whether or not they are inclined towards deception?

A more troubling question for the book trade might be: When will twist fatigue set in? If you’ll pardon a mixed metaphor, how often can writers go to the well of the great reveal before the bucket scrapes the bottom? If every week the supermarket shelves are loaded with more paperbacks with dark covers and promises of shocking secrets, how long before readers grow weary of them?

Stolen SoulsThose We Left Behind

My latest, Here and Gone (written under the pen name of Haylen Beck) gets its twist out of the way early on. Page 39, to be exact. Does it then qualify as a Big Twist? I’d like to think so. It (hopefully) reverses the reader’s assumptions and shapes the story from then on. It is further built upon by more turns and surprises, keeping the reader on the hook until the last page.

Perhaps that’s the trick in all this: the Big Twist might be at the heart of the novel, but it’s the smaller turns that form the skeleton, the muscle, the sparking nerves of the story. The moment of the reveal might be what sells a book, but it’s the meat and gristle of the narrative that keeps the reader on board for the journey.

Twists and reveals have been with us as long as the novel itself, spanning hundreds of years and countless genres, and will still remain as long as there are readers to be shocked and delighted. But writers and publishers must remember that, while it might provide an easy sales pitch, if we don’t apply the fundamentals of good storytelling, not even the most shocking twist can save us.

Stuart Neville will be in conversation with John Banville at the Dead in Dún Laoghaire Crime Writing Festival in association with The Irish Times at the Pavilion Theatre on July 22nd. Here and Gone by Haylen Beck is published by Harvill Secker