Standing up for the truth about homeopathy and Nazi medicine

Edzard Ernst on writing his memoir ‘A Scientist in Wonderland’ 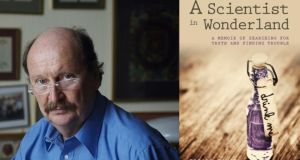 Edzard Ernst: ‘When science is abused, hijacked or distorted in order to serve political or ideological belief systems, ethical standards will inevitably slip. The resulting pseudoscience is a deceit perpetrated on the weak and the vulnerable.’

When I had finished my studies at medical school in the late 1970s, I took a job as a junior doctor in Germany’s only homeopathic hospital. There I learned how to practice homeopathy and several other alternative treatments. After a few months, I left this institution but alternative medicine had become a subject that would engage me for the rest of my life. In a way, researching alternative medicine had become a “hobby horse”.

A few years later, I acquired a second hobby horse when I became head of a large clinical department of the medical school in Vienna. When I started to research the history of my own unit, I noticed records abruptly stopped in 1938. The reason, of course, was in this year Hitler marched into Vienna and all institutions, including the medical school, were “cleansed” of Jews. This meant the vast majority of the professors were sacked, imprisoned or killed. This discovery started my interest in the role the medical profession had played in some of the most unspeakable atrocities of the Nazi regime.

Indeed, my research into alternative medicine showed that most of the treatments in question were not effective and some were even outright dangerous. My research into the history of the German and Austrian medical profession during the Third Reich demonstrated that the worst Nazi crimes would not have been possible without the willing and enthusiastic contributions of medics.

For many years, I pursued these two lines of research more or less in parallel. Even though there was some overlap - for instance, the Nazis had been very fond of homeopathy and other “natural” therapies - I used to see them as essentially separate subjects. Yet there was an important link: medical ethics.

Few people would doubt the Nazi atrocities constituted the worst violations of ethics in the history of medicine. They were possible because doctors had disregarded the most elementary rules of medical ethics. Using unproven, disproven or unsafe treatments on misinformed patients, as in alternative medicine, is also hardly an ethical approach to healthcare. In fact, it violates Hippocrates’ essential principle of “first do no harm” in a most obvious way.

These were some of the ideas I cover in my memoir, A Scientist in Wonderland. Just when the book had been written - and seemingly to prove my point - an extraordinary turn of events linked all these themes together in a most dramatic fashion.

Writing in the Sueddeutsche Zeitung, a journalist disclosed that Claus Fritzsche, a German journalist who had systematically defamed me for my negative stance on homeopathy, had done this with substantial financial support from five German homeopathic manufacturers. One of the firms paying him was owned by the son of Goebbels, the only one of his children who escaped the family’s 1945 mass suicide in Hitler’s bunker.

Now I had to ask myself whether the attacks against me were motivated by my open disclosures about homeopathy or by my equally open disclosures of Nazi medicine? I had hoped that, some day, Fritzsche would give me an answer. Sadly answering this question is no longer possible: a few months after these events Claus Fritzsche took his own life.

A short paragraph from my memoir sums it up well, I think:

“When science is abused, hijacked or distorted in order to serve political or ideological belief systems, ethical standards will inevitably slip. The resulting pseudoscience is a deceit perpetrated on the weak and the vulnerable. We owe it to ourselves, and to those who come after us, to stand up for the truth, no matter how much trouble this might bring.”

I would humbly suggest that everyone involved in medicine and science - whether patient or practitioner (as well as the high, mighty or influential) - takes these responsibilities to future generations seriously in their advocacy and practice.

A Scientist in Wonderland: A Memoir of Searching for Truth & Finding Trouble by Edzard Ernst is published by Imprint Academic.