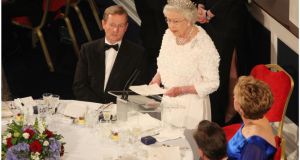 Queen Elizabeth II’s understated but significant words of insight on the troubled history of Anglo-Irish relations at a state dinner in Dublin in 2011 are included in the new edition of the Oxford Dictionary of Quotations: “With the benefit of historical hindsight, we can all see things which we would wish had been done differently or not at all.” Photograph: Bryan O’Brien

As Scotland goes to the polls today to decide on its independence, it is interesting to leaf through this week’s newly published eighth edition of the Oxford Dictionary of Quotations, that bastion of British, or should that be English, learning.

The journalist Claud Cockburn, writing in 1960, saw Scotland as something more than a country or a place on a map. “I had occasion, not for the first time, to thank heaven for that state of mind which cartographers seek to define as Scotland.” In 1790, however, it was a more specific political situation which concerned the poet Robert Burns. “What are all the boasted advantages which my country reaps from a certain Union that can counterbalance the annihilation of her independence?” He might have taken some comfort from the words of Voltaire, affirming the importance of his country: “It is a wonderful result of the progress of human culture, that at this day there come to us from Scotland rules of taste in all the arts, from epic poetry to gardening.” Or, as it is often summarised, “We look to Scotland for all our ideas of civilization”.

Closer to home, Queen Elizabeth II’s understated but significant words of insight on the troubled history of Anglo-Irish relations at a state dinner in Dublin in 2011 also make the cut. “With the benefit of historical hindsight, we can all see things which we would wish had been done differently or not at all.”

A number of quotes new to the edition sum up the personalities of those included, from Steve Jobs finding “It’s more fun to be a pirate than to join the navy” through to Charles Darwin’s “I feel like an old warhorse at the sound of a trumpet when I read about the capturing of rare beetles”. Boris Johnson amusingly states: “My policy on cake is still pro having it and pro eating it”, while Lady Gaga is “just trying to change the world one sequin at a time”. Coco Chanel brings her own form of sophistication with her advice that “A woman can be overdressed, never over-elegant”.

Technology will, of course, always generate comment. However, not everyone is overcome by the hype. Jack Dee points out, “You’re not surfing. You’re not. You’re sitting in your bedroom typing.” Google chief Eric Schmidt has also noticed technology’s effect with his comment, “If you have a child, you’ll notice they’ll have two states, asleep or online.” The writer Harper Lee confesses that, “In an abundant society where people have laptops, cell phones, iPods and minds like empty rooms, I still plod along with books.”

Many inspirational people have added their wisdom. Malala Yousafzai will always be remembered for her powerful address to the United Nations General Assembly in 2013 when she said “One child, one teacher, one book and one pen can change the world”. Aung San Suu Kyi’s Nobel address in 2012 still resonates, “One prisoner of conscience is one too many”. When Maya Angelou died in 2014, one of the quotes much cited in obituaries was the comment that “You may not control all events that happen to you but you can decide not to be reduced by them”. Christa McAuliffe, who died in the 1986 Challenger disaster, tells us that “I touch the future. I teach.” Michelle Obama also inspires schoolgirls with her comment: “If you want to know the reason why I’m standing here, it’s because of education. I never cut class.”

Money is often a subject for discussion, though few politicians are as frank as Britain’s outgoing chief secretary to the treasury, Liam Byrne, whose letter to his successor declared: “Dear Chief Secretary, I’m afraid there is no money.” Mark Carney summed up the impact of the banking crisis on public confidence with “Trust arrives on foot but leaves in a Ferrari … the Ferrari screeched out of the parking lot in 2008.” Warren Buffett offers his own advice that “A very rich person should leave his kids enough to do anything but not enough to do nothing”.

The politics of peace are brought to us in the words of Mahatma Gandhi with “The weak can never forgive. Forgiveness is the attribute of the strong.” Barack Obama’s inaugural address in 2009 offers the sentiment: “We will extend a hand if you are willing to unclench your fist.”

For editor Elizabeth Knowles, “the most tantalising for me is the saying often attributed to Edmund Burke, ‘It is necessary only for the good man to do nothing for evil to triumph.’ In 2009 it headed a poll for ‘favourite quotations’, but it has never been found in his writings. (Although he said something like it, as did John Stuart Mill. ) What is fascinating to me about it is that although it’s now hugely well known in slightly varying forms, it doesn’t really surface until the 1950s (and then on the American political scene). Where did it come from? There must be an underground link still to be discovered.”

The first edition of the Oxford Dictionary of Quotations was published in 1941. The new edition contains over 20,000 quotations covering over 3,700 authors, from Ancient Egypt through to the 21st century. A new feature of the Oxford Reference Quotations website now contains links to dozens of recordings of the quotations spoken by the authors themselves, including JFK’s “Ich bin ein Berliner” speech and WB Yeats reciting The Lake Isle of Innisfree.

The Oxford Dictionary of Quotations, edited by Elizabeth Knowles, is out now, priced £30