‘The Confederation of Kilkenny in the 1640s would be a good subject for a picaresque novel full of spies and skulduggery. But as we say, it’s not my period’ 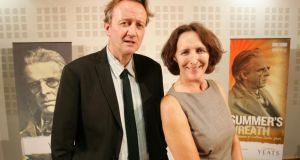 Far too many to list. All Joyce except Finnegans Wake; William Maxwell’s The Chateau; Hubert Butler’s essays.

A first edition of WB Yeats’s The Wind Among the Reeds with the cover designed by Alethea Gyles.

In a v small study in front of a window on the street, with as little distraction as possible.

Most recently, Javier Marías’s A Heart So White and Your Face Tomorrow.

Impossible question – in what area? For what I’m working on now, FSL Lyons’s Culture and Anarchy in Ireland and David Fitzpatrick’s Politics and Irish Life would be contenders.

Isaiah Berlin’s essays on romanticism and nationalism, which I came to late.

Get up early in the morning and get on with it.

Disappearing into a spiral of populism and celebrity-touting.

Length is valued above economy and simple ideas are worked up into portentous cod-philosophy “books”.

That there is nothing new under the sun, and the unexpected always happens.

That there is never enough time.

A dinner-party composed entirely of writers is not a good idea.

Impossible. The talking cat in Saki’s short story Tobermory is very funny, and countless scenes in Evelyn Waugh’s early novels, such as the car race in Vile Bodies or the sports day in Decline and Fall. But it would probably be a conversation out of Flann O’Brien’s At Swim-Two-Birds.

As in the sense of one that I use, probably too much? Not for me to say, but perhaps “bizarre”. If it means in terms of sound/sense, it could be “melancholy”.

The Confederation of Kilkenny in the 1640s would be a good subject for a picaresque novel full of spies and skulduggery. But as we say, it’s not my period.

Vivid Faces: The Revolutionary Generation in Ireland, 1890-1923 by Roy Foster is published by Allen Lane today, priced £20. It is reviewed in The Irish Times by Diarmaid Ferriter on Saturday, October 4th.