Rob Doyle: ‘It would be nice to shock people, but I think that’s long gone’

Depictions of sex, drugs and alcohol no longer take us aback, according to the Irish author. The power of his new book, ‘This Is the Ritual’, comes from its ability to unnerve 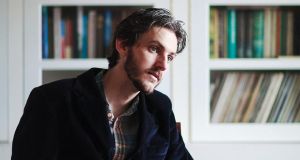 The opening story in This Is the Ritual, the second book by the Dublin-born writer Rob Doyle, is a comic slaying of a herd of sacred cows. The narrator, also named Rob, finds himself on the ferry from Holyhead to Dublin with John-Paul Finnegan, a man he used to live with in London. Throughout the journey Finnegan outlines his problems with the world, with literature, with his native land. “When I think of Ireland,” he says in the first line of the story, “I think of a limitless ignorance.” The outlook gets no brighter as the ferry approaches Dublin Port.

It’s a riotous story, full of snort-inducing phrases that cannot be reproduced in a family-friendly newspaper, but a serious undercurrent flows between the insults and the spleen-venting. The ferry is named Ulysses, and this inane fact allows Doyle, through Finnegan, to probe the question of what a writer like James Joyce could mean to contemporary Ireland; what kind of value, personal or cultural, any writing could possibly have in the here and now. “I wrote because I thought it would heal me,” says Finnegan, “but there is no healing; you just learn to live with your wounds.”

Finnegan is the first of many writers in various states of crisis to appear in This Is the Ritual. They act out their anxieties and their wildest dreams, and write it all down, each in their own twisted, half-sensible way. For Doyle, a tall, quietly spoken and somewhat tense figure, these writers are almost like “imaginary friends”, fictional fellow travellers who can go farther than their creator into the experiences and mental states that fascinate him.

“I suppose in this case, in this book and in these linked stories of frenetic, frenzied, intense writers doing crazy work, it kind of created my own literary hyper-reality which I can live in, which is maybe more exciting to me than the more visible tradition.”

John-Paul Finnegan’s quandary, being both repulsed and obsessed by Ireland, is nothing new in literary terms – Joyce could surely relate – but Doyle’s own relationship to his native sod is somewhat less perverse. Here Are the Young Men, Doyle’s first book, was a straightforward, Crime and Punishment-style amorality play set in Dublin at the tail end of the Celtic Tiger, but it never felt as if the city itself was a vital part of the story. This Is the Ritual reflects more of Doyle’s own travels, finding itself dissolute in various European capitals or hungover in a Mexican anarchist camp, and the locations add a particular colour and atmosphere to each story.

“I like reading as mental travel,” Doyle says. “I tend to read a lot of stuff in translation and books from different parts of the world, for lots of reasons, but one reason is just so I can travel to these places inwardly, in my mind.

“I suppose I write in that sense, too. I love writing in the place; a sense of place is always really important to me. Sometimes I’ll find myself writing a piece of fiction or something just to evoke a sense of place, and then the characters and the incidents will suggest themselves through that process.”

Much was made of the violence in Doyle’s first book. This Is the Ritual is more about unease and disquiet than about shock. The stories seem to be taking place in the numb aftermath of some traumatic event; it’s not that you feel wrong but that you barely feel at all. You’re literally unnerved.

“When was the last time you or anybody was shocked by what they read in a book?” he asks with a shrug. “I don’t know that it happens any more. In a way there’s almost a nostalgia. It would be nice to live in an age where you could shock people, but I think that’s long gone. Graphic sex isn’t going to upset anybody, drug abuse isn’t going to upset anybody, massive drinking isn’t going to shock anybody, but the force of a world view, the tormenting, torrential force of a particular subjectivity or world view, can still upset. Thank God.”

Perhaps the most striking thing about This Is the Ritual is the ease with which it plays with form. Paris Story plays out with characters named X and K, stand-ins for the idea of well-rounded, realistic characters. We see their whole lives in a flash. Outposts is the most outwardly avant garde of the pieces, a long collection of aphoristic collages, snippets taken from overheard conversation, other books, the internet and dozens of other places. Although the piece certainly draws on a modernist tradition, Doyle is wary of what such terms can connote.

This Is the Ritual bears out this lightness, this playfulness, without brightening its darker corners. These are stories of a sick world, of a near-unconscionable, unintelligible world, but they’re also easy to fall into. There’s enough gallows humour to make even the strangest, most discomfiting situations worth rereading a couple of times. Doyle might be staring into the void, but he’s finding something worth laughing at in there. It is, to use one of his words, a perverse kind of pleasure.

“The one thing in the writers that I haven’t just admired but really loved, and really felt alive through, ‘playfulness’ would be a key word, but also ‘perversity’ would be a way to put it,” he says.

“Like Borges – how perverse, how infinitely perverse his stuff is. To inherit this tradition of realism and the novel and the short story in a certain way and then to decide, no, I’m going to write fake encyclopaedia articles, this kind of thing. Perversity taken to a level where it reaches towards the sublime. I can’t remember who said it, but to be an artist is to have the courage of your own perversities. That’s a great way to look at it.”

This Is the Ritual is published by Bloomsbury

Patrick Freyne on Love Is Blind: If the founders of Gilead merged Love Island and Blind Date

Patrick Freyne on Love Is Blind: If the founders of Gilead merged Love Island and Blind Date
2