You find yourself wishing the writer well, trying to will prose past its own limitations 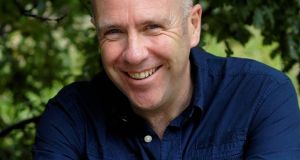 'Richard Flanagan is an ardent voice. It is worth bearing that in mind. And one of the jeopardies of good writing is the possibility of it all going wrong.' File photograph: Ulf Andersen/Chatto & Windus/PA Wire

A young man sets out to be a writer. He struggles. His wife is pregnant, and they have no money. An offer comes in to ghost write the autobiography of a notorious fraudster who is about to go on trial accused of stealing millions of dollars.

The writer is Kif Kehlmann, the narrator of First Person, the new novel from 2014 Man Booker prize winner, Richard Flanagan. He hasn’t so much been struggling with writing as much as flinging himself against it and coming away bloodied. He hopes the ghost-written biography will give him a stake in the writing business – but the thing starts badly and keeps going that way. The subject Siegfried Heidl is elusive, a chameleon, manipulative, charming and ruthless. He gives nothing of substance away, but hints at connections, the CIA, shadowy cabals.

It feels improbable but in some sense it is true. In the early 1990s writer Richard Flanagan was hired by fraudster John Friedrich to ghost write his autobiography in six weeks, pending his trial for a fraud involving almost 300 million Australian dollars. Friedrich died during the six weeks.

Siegfried is a chameleon, a con man, a seer. We’re told that his eyes are depthless, but we don’t feel it. We’re told that he is visionary, but we don’t see the vision. Kif tells us he is in thrall to the man, that Siegfried has taken over the ghostwriter’s mind, but telling the reader about this charisma doesn’t make it so. He is an arcane creation. The ruthless tycoon-shyster belongs to fictions of the last century. The billionaire-seers of today cultivate the personable, but are no less sinister and self-serving and need a new language.

You find yourself wishing the writer well, trying to will the prose past its own limitations. The same devices are used again and again. There are rhetorical questions. Single sentences are isolated in the text to make them emphatic. The same obsessions are returned to without being advanced or resolved. You’re entitled to ask what is going on when you come across a minor character “on a ripped russet recliner, reading”, and to wonder if someone is having you on.

A bad writer can travel a long way on a bit of empathy. Set up a character the reader can like, give them a few appealing characteristics, and spread it as thin and as long as they can. A good writer may dispense with likeability, but something has to take its place.

The novel may be an extended commentary on the use of the first person voice, the difficulty of it. You question it in the process. Is a good writer (Flanagan is a good writer) pretending to be a bad writer? Or is it simpler than that – has a good writer set out on a novel which has all gone wrong on him? Richard Flanagan is an ardent voice. It is worth bearing that in mind. And one of the jeopardies of good writing is the possibility of it all going wrong.

Failure has to be in there somewhere. It’s the difference between formula and art. You have to reach beyond the known and you can end up being snowblind to the gathering failures of a novel which won’t go the distance, or find yourself sensing that the whole thing is buckling beneath you and trying to wrench it back into shape.

Flanagan’s quality forces itself into the writing in places. Kif’s childhood friend Ray feels real. The blunt one-syllable name connects you. With Ray you feel Flanagan bite down on the matter of Tasmania and Australian life, the landscape, the character, the rigour and beauty. Then you’re back with the characters who don’t work. There is an editor called Pia Carneval, an empire of the inconsequential implicit in her name. She’s a cipher for the superficiality of the publishing industry. Hundreds of empty shipping containers in the bush spark a commentary on post-capitalism, but the analogy is laboured.

You want the art that takes you further into the world, not the thrashing around of an out-of-his-depth narrator. Kif’s wife is stoic and you want him to be stoic as well. He takes off to low bars, racked by furies that are hard to grasp. You want to tell him to wise up, that writing has its importance but not in the way he thinks it does. That self-absorption has nothing to do with it. That art doesn’t feed on the pain of others, and writers are sometimes narcissists but so are others.

There is a confrontation with mortality in the bush, hallucinatory moments. There is violent death, unreliably narrated, the power and reach of Flanagan’s prose held back in favour of something lesser.

With the backgrounding of Siegfried the book starts to find momentum. Real disappointments and failures come into focus. Siegfried obsessively remembered has less of a hold than Siegfried obsessed upon in real life. Ray is on hand to ground Kif and bring the narrative back to earth, death’s grey hand stretching out for him, not to be outwitted. But within reach of the authentic, Kif’s careless recollection of the death of a child feels like a last straw. You can pity those who miss the point of their own lives, but a voice of such epic disregard is hard to spend time with.

Eoin McNamee is the author of the Blue Trilogy