An Irishwoman’s Diary: How did her literary career affect her children? 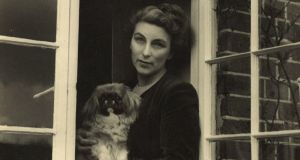 ‘There’s so much of myself, and of my sister, in her work. We could recognise whole sentences, ornaments, places. I think I was recognisable to myself – but as a child you just accept that’ says Jane Murray-Flutter of her mother, Rumer Godden (above).’ Photograph: Jane Murray-Flutter

More accusation than query, my cry resounds down the telephone wires: where is The Dragon of Og? The voices of my adult children declare their innocence from three different time-zones, wondering in turn where to find The Story of Holly and Ivy and if Miss Happiness and Miss Flower is still where they had seen it last on an unplundered shelf.

All once cherished, these books may have all long disappeared from sight, but 13 of Rumer Godden’s other books are being e-issued as Virago Modern Classics.

Godden has never been out of print, but many who relish the delicacy of her writing for children do not appreciate the quality of her adult novels, several of which aim a fierce light at children’s responses to the turmoil of adult relationships. An early book was Black Narcissus (1938), later an Oscar-winning film while another novel, The River, was directed in 1951 by Jean Renoir. Both are to re-appear thanks to Virago, along with A Fugue in Time and Breakfast with the Nikolides. From what could be called her “coming-of-age” books, Listen to the Nightingale and Thursday’s Children will reflect both Godden’s experiences in India and her training and career as a dancer and teacher.

Rumer Godden’s India was not that of the Raj; instead it was a country of incompatible loyalties and intuited tribal distinctions. She seems always to have preferred to be an outsider, always moving on, even after her return to England in 1945 where among her many homes was Lamb House in Rye, earlier the residence not only of novelist EF Benson of Mapp and Lucia fame but also of Henry James. Her conversion to Catholicism in 1969 yielded This House of Brede and her elder daughter Jane Murray Flutter can trace Godden’s peripatetic life with her second husband James Haynes-Dixon through several English counties.

The impact of her mother’s literary career on her own childhood is the subject of the talk Murray Flutter will give at this year’s West Cork Literary Festival. “There’s so much of myself, and of my sister, in her work. We could recognise whole sentences, ornaments, places. I think I was recognisable to myself – but as a child you just accept that”.

In Kingfishers Catch Fire, perhaps the most autobiographical of Godden’s 24 novels, comes the line: “When Sophie had an idea, her child Teresa trembled”. Jane Murray Flutter says she was not Teresa. “No, we had a wonderful childhood. That book is set in Kashmir, and we did live there in a very primitive house. We were the only white people in the village and yes, the things that happen in the book did happen to us. I was eight years old, and I remember what fantastic summers we had, going off with a pack-horse and a pony-man and our Pekinese dogs and our special Kashmiri shoes. It was a most wonderful time, really”.

It came to an end with the “absolute horror” of being sent to an English boarding school when she was 12. Until then she and her sister Paula were taught at home. “We always knew not to interrupt, we were very conscious of the fact that if we wanted butter for our bread it came from mother’s writing! It’s true she never made a lot of money because she never wrote the same kind of book, although she stayed with her agents Curtis Brown all her writing life. Also at the time her books for children were regarded as demeaning by the literary hierarchy. I think she was conscious of that. Yet they were written as a discipline between each of her adult novels – she was always very tuned in to children, really.”

Tuned in or not, Godden did not read those stories to her own two girls: “She read them to my children, but not to us. She used to have little dolls’ tea-parties for the grandchildren, sending out tiny invitations. But that did not happen in my childhood, except for my own doll which I bought in the bazaar in Calcutta”.

Rumer Godden always wrote long-hand, working until she could no longer hold her fountain-pen – about two years before she died in 1998 at Murray Flutter’s home in Scotland. “We were, we are, terribly proud of her. But there is always a price to be paid, isn’t there?” Asked at last if Jane and Paula paid that price she pauses for a while and then: “I think we probably did”.‘

The West Cork Literary Festival opened yesterday and runs until July 13th in Bantry: www.westcorkliteraryfestival.ie The Dragon of Og is available from Abebooks