A frenetic tale of Irish royalists in 17th-century Europe, who had a tough job proving their loyalty 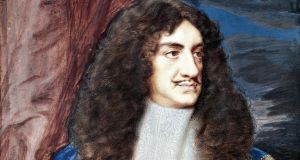 Many studies of emigration from Ireland suggest that most who departed did not expect to return. This was not true in the 17th century, when many emigrants became exiles in the classic sense, because they never became reconciled to permanent severance from Ireland.

Catholics who then departed, usually in the aftermath of military defeat, believed that Providence would facilitate their return, and the spiritually motivated even underwent training in Catholic seminaries to prepare for future pastoral work at home.

The thousands who enlisted in the armies of Catholic Europe had ambitions to use the talents they were honing in foreign service to overthrow the Protestants who had expelled them from Ireland. Both clergy and laity identified with the propaganda that announced their likely return and denounced the iniquities that occasioned their banishment.

The Irish exiles whose tribulations are vividly reconstituted by Mark Williams in The King’s Irishmen were not involved with propaganda directed at an Irish Catholic audience. Those in question, a mixture of Catholics and Protestants, were royalists who had generally upheld crown authority in Ireland during the wars of the 1640s and had usually been guided by James Butler, earl (and subsequently duke) of Ormond, and viceroy for King Charles I for most of that time.

Then, in 1649, when the king was executed – or murdered, as they contended – by order of the English parliament, they moved their allegiance to the king’s eldest son, whom they proclaimed King Charles II. They then joined him and his French mother, Henrietta Maria, in political exile in various locations in continental Europe rather than seek an accommodation with the parliamentary forces now commanded by Oliver Cromwell.

-religious conditions, dictated by the nuncio and most Irish Catholic bishops, that would have made a royalist restoration impossible in Britain.

The refusal of Ormond to ally with the Catholic army earned him the sobriquet of “unkind deserter”, while Morrogh O’Brien, baron of Inchiquin, who also joined the royalist exodus, was reviled in Catholic circles as Murchadha na d-tóiteáin (Morrogh the burner) because of his destruction of places revered by Catholics during the recent wars. Williams identifies Ormond and Inchiquin, together with Bishop John Bramhall, the courtier Daniel O’Neill, Theobald Lord Taaffe, and four Talbot brothers – Peter, a Jesuit priest, and three soldier adventurers, Richard, Gilbert and Thomas – as the leading royalist exiles from Ireland, and his book studies their efforts to have their king and themselves restored to what they had lost as a result of defeat in war.

He finds that they remained indifferent to disparagement by political opponents in Ireland, other than when it countered their solicitation from various continental Catholic rulers for hospitality and military support for themselves and King Charles, and military commissions for themselves.

They became involved with propaganda at another level, however, because many British royalists questioned how anybody with Irish associations might be considered a royalist. Williams’s purpose is to explain how this particular group, who had become courtiers in exile because they enjoyed royal rather than royalist invitations, strove by their arguments and actions to prove that the king’s Irishmen were true supporters of the crown.

Therefore the Irish exiles had to explain in print and in correspondence how even their most questionable actions in Ireland had been in the best interest of the monarchy. Then they allowed the favour the king showed them to bear witness to their honour.

The pasts of the Irish royalists became insignificant after 1651 when the English parliamentary forces destroyed the Scottish army and with it the king’s hope that he could quickly recover his father’s throne with Scottish support.

Thereafter, King Charles required subventions from sympathetic continental rulers to maintain his court in exile, and he hoped also to negotiate the military support that now seemed necessary to secure a royal restoration by force.

Since the rulers most likely to assist King Charles were Catholic, the Irish at court acquired an added importance because the Catholics among them had been educated on the Continent and possessed the linguistic talents and Catholic connections necessary for successful negotiation. Then those, such as Ormond, who were Protestant could point to their efforts to accommodate Catholicism within a Protestant monarchy.

-and-dagger diplomacy While changing circumstances provided the king’s Irishmen with new functions, their fresh responsibilities did not enhance their standing with their British peers. Their integrity was now called into question

, both because some of the individuals with whom they negotiated were adventurers of doubtful reputation and because they engaged in cloak-and-dagger diplomacy with both France and Spain, which happened to be at war with each other.

Another reputational problem arose because the young king – increasingly bored as months in exile turned into years – mandated one Irish courtier and a talented dancer to procure mistresses for the royal couch. The efforts of Ormond and Bishop Bramhall to monitor the king’s private life and to uphold Anglican services at court could not counter the view that the Irish were a corrupting influence, an opinion that seemed confirmed when Inchiquin, previously noted for his firmness with “papists”, succumbed to Catholic conversion.

Williams’s discussion of the frenetic continental activities of his chosen group is always entertaining. However, the Restoration of 1660 comes as something of an anticlimax: it happened not because King Charles had acquired continental backing to recover his crown by military means but because some leading members of the British political nation, fearful of the instability that had befallen their country following the death of Cromwell, in 1658, invited Charles II to return and restore order and deference to a society that had lived through 11 revolutionary years.

This outcome meant the Irish courtiers in exile could take little credit for the Restoration, but King Charles, his mother and his brother James, duke of York, appreciated the loyalty they had displayed during troubled times, so individual royals saw to it that each of the nine was rewarded appropriately when the monarchy recovered its power to dispense largesse.

The King’s Irishmen thus leads to a happy ending, and Mark Williams has rescued the continental endeavours of leading Irish royalists from oblivion. His greatest achievement is that he has sharpened our understanding of British royalist ideology during the revolutionary years and explained how difficult it was for people with Irish associations to identify with it.

The book disappoints only because the British royalists who dominated the court in exile remain shadowy figures, and because in treating Irish royalism Williams devotes attention to but nine individuals and ignores the fate of the thousands of junior officers and soldiers who also found refuge on the Continent after, as they would have represented it, they had fought in Ireland for their king.