Peter Bodo’s book is built on the clash between an aloof Ashe and the upstart Connors, writes Laura Slattery, but the final itself is an anti-climax 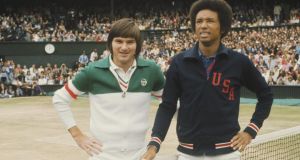 Jimmy Connors said he was incensed by Arthur Ashe’s pointed choice of warm-up outfit on the day, his USA-emblazoned Davis Cup jacket. Ashe had accused Connors of not being patriotic due to his disdain for the Davis Cup national team tournament, and in response Connors’ manager Bill Riordan had decided to sue Ashe for libel. Photograph: Focus on Sport/Getty Images

Arthur Ashe was the “Virginia gentleman” whose father taught him never to lose his cool if he wanted to thrive among the white tennis elite – for black players, the rules were different. His compatriot Jimmy “Jimbo” Connors was an emotional showman, an entertainer of a kind, who developed an on-court habit of playing with his crotch.

The last Grand Slam singles champion from the US to earn his college degree, and the last to serve in its army, by 1975 Ashe was already headed towards what looked set to be a post-tennis career in politics. Connors, meanwhile, was one half of a tennis couple dubbed the “Lovebird Double” (the other half being Chris “Chrissie” Evert). He bragged that he had never read a book.

Tennis in the 1970s was often a meeting of visual, technical and ideological contrasts, and in his new book Ashe Vs Connors, tennis journalist Peter Bodo makes the case for the Wimbledon men’s final of 1975 being an apex of these two “worlds in collision”.

As Bodo spells out, there was also personal tension between the two when they met on Centre Court that year. The aloof Ashe was president of the players’ union, which Connors had refused to join. Ashe had also accused Connors of not being patriotic due to his disdain for the Davis Cup national team tournament, and in response Connors’ manager Bill Riordan had decided to sue Ashe for libel.

But despite this background noise, Bodo’s book can’t help but run into a flaw in the narrative. It lies in its climax: the match itself. The match that played out would not, as he admits, make the shortlist of great Wimbledon finals. It was simply too one-sided. Ashe, who walked on court as the underdog, demolished Connors 6-1 in each of the first two sets, and though Connors clawed back the third, Ashe closed out the match in the fourth.

While Connors has said he was incensed by Ashe’s pointed choice of warm-up outfit on the day – his USA-emblazoned Davis Cup jacket – the reason for Ashe’s victory is more prosaic. He made tactical changes to his game ahead of the final, surprising Connors with his shot selection. He was, Bodo says, “in the zone”.

The tale of the 1975 final in fact goes against the run of tennis history. Ashe may have been the first black man to win Wimbledon, but in Bodo’s view, this victory – his only Wimbledon title and the third of his three grand slams – was more of a last than a first.

Then 31, Ashe had more in common with men of the Ken Rosewall and Rod Laver generation than he did with Connors (then 22), “wingman” Ilie Nastase and up-and-comer John McEnroe. His triumph was the last stand of the dignified old guard. The maverick upstarts of the 1970s tennis boom were already circling.

Ashe Vs Connors goes into great detail in its present-tense accounts of how both players got their starts. But this exposes another problem. For all his tenacity and bluster and character, the story of self-proclaimed “outsider” Connors and his prescient, tennis-loving mother Gloria simply has less resonance today than that of the remarkable Ashe.

Having grown up in a segregated society and fought the racism of the tennis establishment his own way – astutely picking his battles – by the end of the 1970s, Ashe was undergoing surgeries for (likely hereditary) heart disease. He contracted the HIV virus from a blood transfusion and died in 1993 aged just 49.

Connors may have been the more successful player, but when the United States Tennis Association opened a new stadium at Flushing Meadows, New York, in 1997, there was only one choice of name. The Arthur Ashe Stadium is now the home of the US Open’s biggest showdowns and the largest tennis venue in the world.

Bodo’s book has been published ahead of the 40th anniversary of Ashe’s Wimbledon victory, which is also being marked by a BBC2 documentary that will be shown on Friday, June 26th – its fitting title is Arthur Ashe: More than a Champion.