Extraordinary novel by writer of tremendous insight, but trauma laid on a little too thick 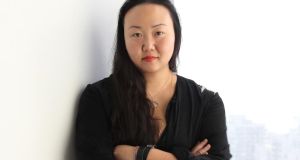 Sexual abuse is mentioned on the very first page of Hanya Yanagihara’s 2013 debut novel, The People in the Trees. In her second that subject takes longer to loom into sight, although it casts a shadow from early on. A Little Life, longlisted for the Man Booker Prize last week, begins on an upbeat note.

In New York four industrious young men, close friends since college, are setting out on their career paths. Willem aspires to be a serious actor, Malcolm a respected architect. Jude is a lawyer with a passion for pure mathematics, JB a gifted artist who makes paintings that “chronicle in pictures the drip of all their lives”. Each comes with insecurities, convictions, expectations, but they are alike in their kindness and cleverness; their futures seem filled with promise.

Yanagihara has a keen, incisive eye. No detail that might make a fictitious life seem whole and believable is excluded. Characters shower and bake and polish; they fix broken objects, send cards, pick up dropped shirts. And once each man has achieved success she deftly describes the particulars of their professions, how the architectural models Malcolm builds are upgraded from vellum and cardboard to glassine and wood, as well as the weighty silences between fanfares, such as Willem on a film set between shoots, experiencing “the strange sensation that he is gone, and that his very life is an imagining”.

“Most people are easy: their unhappinesses are our unhappinesses, their sorrows are understandable, their bouts of self-loathing are fast-moving and negotiable.” This sentence appears roughly halfway through A Little Life, at which stage Yanagihara has allowed the most straightforward of the four men, Malcolm and JB, to fade into the scenery, and drawn the uneasiest of them all, Jude, into piercing focus.

Jude is magnetic. He has a beautiful face and a fetching limp; he is generous, humble, brilliant, highly regarded and deeply adored by his friends and colleagues. But he is also “a magician whose sole trick is concealment”, and the plot is largely driven by the slow leak of flashbacks that elucidate what happened to Jude in childhood, the profusion of tortures he endured and how they created the gravely ill and self-loathing adult he has become.

Bit by bit we learn that he was abandoned in a bin and raised in a monastery of depraved monks, how he was brutalised and prostituted at every stage of his early years. “Not having sex: it was one of the best things about being an adult.” In a society so infatuated with exactly the opposite this is an arresting sentence in an arresting book.

Yet A Little Life’s most graphic passages relate to the injuries Jude inflicts on himself. The only way he is able to keep his nightmarish memories at bay, and to maintain the brittle equilibrium of his life, is through persistent self-mutilation: “He had begun a new method of balancing the edge of the blade on his skin and then pressing it down, as deep as he could, so that when he withdrew the razor – stuck like an axe head into a tree stump – there was half a second in which he could pull apart the two sides of flesh and see only a clean white gouge, like a side of fatted bacon, before the blood began rushing in to pool within the cut.”

This description, in the second of the book’s seven sections, made my jaw clench, my stomach lurch. But as Jude’s horrific cutting wears on, alongside his arduous efforts to overcome his discomfort with sex, and his episodes of chronic pain, so their impact starts to diminish.

This may be an obvious criticism to level against a 700-page book, but it is too long. Yanagihara’s descriptions are never gratuitous, but as the multitude of metaphors for Jude’s suffering stacked up I grew desensitised. The sheer incidence of loose men arbitrarily hunting for a young boy to violate began to stretch plausibility, as did the ceaseless streak of evil luck visited on a single person.

By the fifth section I was barely wrinkling my nose. In the margin alongside a line that reads “they are all smiling at one another, and the world seems to hold nothing but sweetness” I jotted the phrase “uh-oh . . .”

Published in the US in March, A Little Life crosses the Atlantic on a tidal wave of praise. At times its unabashed sentimentality put me in mind of the least appealing aspects of American cinema, yet it isn’t fair to dwell on the faults in what is, primarily, an extraordinary work of fiction by a writer of tremendous insight. A Little Life, although occasionally overemotional and exhausting, is always fascinating, and I suspect that Yanagihara, who apparently wrote the novel in an 18-month frenzy, wholly intended to reposition the outposts of realism in the same way as she challenges the confines of conventional relationships, testing the reader’s credence as a result.

Perhaps what I found most fascinating was her refusal to anchor the novel in any particular period. Although it spans 40 years it feels consistently contemporary. There is no reference to historical events – no wars, no presidents, no 9/11 – and the internet always exists, even when Jude is a boy, as do mobile phones, although technology is never attributed any particular importance. There’s something superbly defiant in the novel’s dismissal of history, as there is in its conspicuous dearth of women and in its superabundance of gay men. A Little Life is strangely timely in its timelessness.

Instead Yanagihara defines eras in relation to the experiences they represent: “The Ambitious Years. The Insecure Years. The Glory Years. The Delusional Years. The Hopeful Years”, underscoring how, epic though it may be, this is a novel essentially about the resonance of a single “little life” and the mark it leaves behind on so many “little” others.

Sara Baume is the author of Spill Simmer Falter Wither