Paschal Donohoe: ‘It made my head spin. In a world where our economic and political models are worth defending but are straining, this can only be a good thing’ 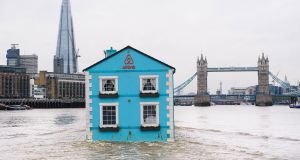 Radical Markets: The floating house was launched by accommodation website Airbnb to celebrate new rules on home sharing which allow people to share their homes with travellers for up to 90 days a year. Photograph: Mikael Buck/Airbnb/PA Wire

This year marks the 45th anniversary of the publication of the Report of the Committee on the Price of Building Land. Otherwise known as the Kenny Report, it grappled with the consequences of the soaring price of land and how the benefits of this wealth could be better distributed.

In the period preceding the report, land value had increased fivefold, enabled by the building of publicly funded infrastructure. The report recommended that public authorities have the right to acquire land at market prices with an added premium of one quarter.

That this proposal was never implemented is hardly a surprise. It would be an unprecedented intervention with property rights. Furthermore, it would have set the price of purchase, not through exchange or negotiation but by fiat.

While the deficiencies of markets are well understood, remedies have mostly originated from the left of the political spectrum. Their argument is that we need smaller and less powerful markets.

This provocative and original work, by two American economist lawyers takes a radically different approach. Radical Markets begins by acknowledging current challenges. This is described, somewhat inelegantly, as “stagnequality”; a “lower growth combined with rising inequality rather than inflation”.

Their policy response is different to centrist politics, it is to radically expand the size and operation of markets. New forms of exchange are proposed for property, voting, migration, data and competition policy.

None of these ideas will make it into Budget 2019, or indeed any other budget that I might be involved with. The authors acknowledge this when they write “Our proposals will require years of testing, improvement, and gradual scaling up before they are ready for full implementation”.

But this is what makes this book worth reading. Certainties are changing. The most valuable accommodation company in the world owns no hotels. Cars might soon have no drivers. Intellectual property, which we cannot touch, is worth more than many factories.

This book imagines an impossible world. But imagination always has a value.

This impossibility is most evident in the chapter on property. The very ownership, it is argued, of private property creates a “monopoly problem”, where wealth is concentrated in land ownership and owners can stifle any initiative that increases the public good.

So the answer is simple, “people rent land but do not own it, private property in land is abolished”. Even some of my colleagues on the hard left would flinch at this!

In this world, the possessor of the property assesses the value of their asset. This value is then taxed, creating an income stream for the State. The higher the valuation, the higher the tax.

However, and stick with me on this, if any other citizen is willing to pay the asset price then the property must be sold. The authors conclude that “possessors become lessees from society”. This is an attempt to sever ownership from exchange, and introduce a market for land use as opposed to ownership.

This is in the realm of science fiction, not plausible policy. However the disruptive nature of the analysis is a cause for reflecting on that which appears certain now.

Similar insights are yielded when the authors examine the nature of voting. They contend that “a vote can tell you only whether a person prefers one outcome to another, but not how much the person prefers the outcome”.

This is contrasted with the operation of price levels within economies. It is possible to signal intensity of preference by how much you are willing to pay for a good or service.

A model called Quadratic Voting is suggested. Each citizen has the same allocation of voice credits. These credits are used to cast multiple votes, but it costs more credits to cast votes on any particular topic. This means the voter has to express a view less on other matters.

Again, there is no prospect of this happening in any democracy. But in a world where algorithms determine what news we see, it reminds the reader of the radical possibilities enabled by technology.

The authors aim to create “Radical Markets” to “help break down privileges based on wealth and economic advantage”. These proposals are literally incredible. But we now grapple with developments that once were the stories of science fiction.

This is typified by the magnificent epilogue which explains markets through the computing concepts of distributed computing and parallel processing. It then suggests a world where artificial intelligence will take the place of these markets.

Read this difficult and provocative book. It made my head hurt, and then spin. In a world where our current economic and political models are worth defending but are straining, this can only be a good thing.