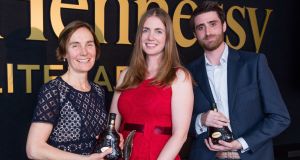 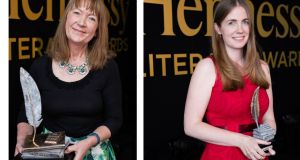 Ríona Judge McCormack, the granddaughter of one of Ireland’s most successful dramatists, was named the Hennessy New Irish Writer 2016 at the 45th annual Hennessy Literary Awards held last night in the RHA Gallery in Dublin.

Judge McCormack’s short story, Some Strange Moon, also won the First Fiction prize, while Chris Connolly won the Emerging Fiction prize and Jane Clarke the Emerging Poetry award. The winning entries were first published in The Irish Times, which publishes the Hennessy New Irish Writing page on the last Saturday of each month. Éilís Ní Dhuibhne also became the 14th Irish writer to be inducted into the Hennessy Literary Awards Hall of Fame.

“Starting out as a writer can be a terribly lonely experience, full of self-doubt,” Judge McCormack said. “At times you think you’re mad for even trying. Just over a year ago, in fact, I’d been at the point of throwing in the towel. That was when Ciaran Carty emailed me, to say my first story had been accepted for publication. I can’t express what an important moment that was for me. I do remember holding onto it like a life raft.

“Opportunities like New Irish Writing are crucial – they tell you someone believes in you, they give you the strength to persevere through the inevitable rejections and low times to come. I am tremendously grateful that this opportunity was there for me; I hope it continues to be there for others for many years to come.

“Just to be published in the Irish Times was a delight, as was the chance to meet all my fellow nominees – such talent, warmth and wit. I’m honoured to be among them, and I can’t wait to see what we all go on to write next.”

Judge McCormack is the granddaughter of the writer Michael Judge, who died last year aged 94. His 18 radio dramas for RTÉ and BBC spanned from 1959 to 1997. He also wrote for The Riordans and Glenroe as well as 14 original screenplays. His play, Death is for Heroes, was the first in the new Abbey Theatre building in 1966.

“My lovely granddad was a big part of my inspiration to begin writing, and always an extremely supportive reader of my stories. He died last year, but not before he had the chance to see my first story published in the Irish Times, which was an extremely proud moment for him.”

Judge McCormack has spent nine years working in international development in Ireland, Cambodia and South Africa. She was born in Dublin in 1983, grew up in Skerries and now lives in Johannesburg, where she is editing her first novel, a slantways-told story set in the aid world.

In February, she was awarded the inaugural Galley Beggar Press Short Story Prize for her story, Backburn. Over the last year, her work has been Highly Commended in the London Magazine Short Story Competition, and shortlisted for the Bristol Short Story Prize and the Aesthetica Creative Writing Award, and broadcast on RTÉ Radio as part of the Francis McManus Award.

Chris Connolly won the emerging fiction category for his story, Right or Good, a short story about coping with loss and deception. His fiction has been broadcast on RTér radio and appeared in Southword, Boston Literary Magazine and the National Flash Fiction Day anthology.

Jane Clarke won the emerging poetry award for Isobel; The Blue Bible; and Every Tree. Clarke, who was born in Roscommon and lives in Wicklow, combines writing with her work as a management consultant. Twice shortlisted for the Hennessy Literary Awards, she previously won the Listowel Writer’s Week Poetry Collection Prize (2014), the Trocaire/Poetry Ireland Competition (2014), Poems for Patience (2013), iYeats (2010) and Listowel Writers Week (2007). Her first collection, The River, was recently published by Bloodaxe Books.

This year’s inductee, Éilís Ní Dhuibhne, said: “One of the red-letter days of my life was the day in 1974 when I got a letter from David Marcus, editor of New Irish Writing, letting me know that he would like to publish my short story, the very first short story I ever submitted to any publisher. This was the best encouragement a young writer could get. Another red-letter day was the day in 2016 when I got an email from Ciaran Carty, editor of New Irish Writing, asking me if I would agree to being enrolled in the Hennessy Hall of Fame. This is one of the best encouragements an old writer can get. It’s just great!”

Elaine Cullen, market development manager of Moët Hennessy, said: “Hennessy has always been a dedicated supporter of Irish culture and the Hennessy Literary Awards is one of the greatest examples of this. This year we are proud to recognise and welcome these writers into the Hennessy family and celebrate 45 years of our support of emerging and established Irish literary talent.”

This year, the judges were Ciaran Carty and bestselling writers Paul Perry and Hugo Hamilton, both former Hennessy winners.