Poetry: Visions of Ireland that are challenging, affectionate – and funny 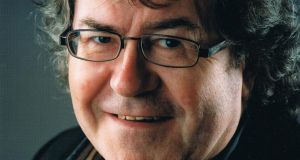 Gabriel Fitzmaurice: his ballads double as, or include, tales and jokes and self-reflective meditations

The Dublin poet Valentin Iremonger (1920-92) first published his poems in a provocatively titled 1944 anthology, On the Barricades. As The Poems of Valentin Iremonger (Rún Press, €20) makes clear, these poems, possibly his best work, imitate WH Auden’s anxious landscapes and challenge the staid post-Yeatsian world of Irish poetry: “Looking at stones and airguns I recall my childhood / Spent among tin-cans, gravel heaps and dead walls, / And the strand at Sandymount, where the tide reminded / Me of the outside newspaper world,” begins Backward Look, while From New Ross ends “Somewhere there should be love aloud like music. / Over the hunching hills, the wires go trailing their furious / Messages, the oiled machinery of nature shunts / Day down for repairs. Silently the night’s technicians hunt.”

By the time he wrote those lines Iremonger had embarked on a distinguished diplomatic career, although only India, of his many foreign postings, makes any appearance in his work. Even then On Some Boiler (at the Delhi Station) is the occasion not for a meditation on India but for a catalogue of absent friends, including, among others, “John Montague, a bullying friend in Paris, worried”, “Kevin Nowlan, a professional historian, / addressing a demo from a balcony”, and Conor Cruise O’Brien, a “Voltaire cultivating his garden / At Whitewater where we were all so happy / Sometime”.

“No one should go / Back to the old places”, begins a late poem, Sandymount Now, but Reservations (1950) and Horan’s Field and Other Reservations (1972) limit themselves almost entirely to Sandymount and environs, whose redevelopment is lamented in poems that seem bogged down by the landscapes they record.

Uneven as this book is, it is a credit to its publisher that Iremonger’s poems have been collected. The introduction to the poems and the notes skimp and occasionally err on details of Iremonger’s contexts, but then this is the kind of project that would usually be the precinct of university departments and scholars, and the press’s founder Seán Haldane has done well not just to reproduce the books but also to add strong translations of Seán Ó Ríordáin and others.

Gabriel Fitzmaurice’s The Lonesome Road: Collected and New Poems (Liberties, €14.99) gathers work from three decades of his writing for adults. An early poem, A Game of Forty-one, is affectionate about his home village of Moyvane, in Co Kerry, even as he wishes “there were some / Other way of spending / A lifetime in this town / [where] there is no bill or Bible / But the verdict of the table”. Fitzmaurice likes to use a wide range of regular forms, but he bends sonnets and villanelles alike so that the tone is ballad-like: these are ballads that also double as, or include, tales and jokes and self-reflective meditations.

Older musicians, children and those who are marginalised are at the heart of the poems. Big Con remembers Con Greaney singing, at home in Rooska, at a club in Dublin and working in England, whose leaving he recounts:

And the night before I was leaving

I spent it with the blacks:

They were singing their songs

And one said in the jacks:

Big Con, you have your own songs?

I told him I could sing

But they wouldn’t know my singing;

Still they made me sing.

I sang the song the mountains sang

Had removed from here to there.

Greaney’s singing and store of songs provide as good a model for Fitzmaurice’s poems as the work of his fellow north Kerry writers Brendan Kennelly and Michael Hartnett, whose Maiden Street Ballad is a classic in the same mould as Big Con, as are Fitzmaurice’s Aisling Gheal, On Declining a Commission to Write 200-word Biographies of Irish Writers for Their Portraits in a Hotel, The Day Christ Came to Moyvane, What the Provo Said to Me and Obsession, with its unforgettable window-breaking protagonist.

As the titles indicate, Fitzmaurice sets out to persuade readers: each anecdote is turned towards a larger point. In this, and in how his occasionally Gothic villages coexist with an awkward modernity, the poems bear comparison with the fictions of younger male writers such as Kevin Barry, Billy Keane and Donal Ryan.

Like Fitzmaurice and early Iremonger, Kevin Higgins satirises hypocrisy and, in his fourth collection, The Ghost in the Lobby (Salmon, €12), loves to carve out negative spaces. That Which Must Not Be Examined locates the damaged world of “Always the hangover, / never the night before”, while Unbecoming begins, “All we became / has left the building”. In the aftermath of such leave-takings, Higgins generates a world where “They have affairs with dental assistants / in third floor apartments by the docks. / You think of nothing else” (Them and You). Higgins reserves his most hyperbolic satires for armchair conspiracy theorists who “demand the truth / so they can put it in a jar / and spend their whole lives / avoiding it” (Against Togetherness) and those Pollyannaish optimists who think history’s cataclysms have concluded: “The hijackers you envisaged / always landed the plane / and let the passengers go” (Historically Sensible). The casualties of both approaches are evident in The Euphemisms, one of his poems about “Something you can’t have women / walking in off the street /and demanding.”

Higgins is, like Fitzmaurice, a poet who has a vision of Ireland. His is populated by smug, noisy fools and furnished with both trendy white goods and the flotsam of talk radio. Fluent and often as laugh-out-loud funny as Paul Howard’s Ross O’Carroll-Kelly, Higgins’s poems sometimes make you think that they do not want to escape the terrible, lovingly described cul de sac he has defined so well.