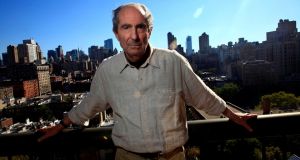 Prize-winning novelist Philip Roth has died at the age of 85.

Roth, the author of more than 25 books, was a fierce satirist and uncompromising realist, confronting readers in a bold, direct style that scorned false sentiment or hopes for heavenly reward.

He was an atheist who swore allegiance to earthly imagination, whether devising pornographic functions for raw liver or indulging romantic fantasies about Anne Frank.

In The Plot Against America, published in 2004, he placed his own family under the anti-Semitic reign of President Charles Lindbergh.

In 2010, in Nemesis, he subjected his native New Jersey to a polio epidemic.

He was among greatest writers never to win the Nobel Prize. But he received virtually every other literary honour, including two National Book Awards, two National Book Critics Circle prizes and, in 1998, the Pulitzer for American Pastoral.

He was in his 20s when he won his first award and awed critics and fellow writers by producing some of his most acclaimed novels in his 60s and 70s, including The Human Stain and Sabbath’s Theater, a savage narrative of lust and mortality he considered his finest work.

He identified himself as an American writer, not a Jewish one, but for Roth the American experience and the Jewish experience were often the same.

While predecessors such as Saul Bellow and Bernard Malamud wrote of the Jews’ painful adjustment from immigrant life, Roth’s characters represented the next generation. Their first language was English, and they spoke without accents. They observed no rituals and belonged to no synagogues.

The American dream, or nightmare, was to become “a Jew without Jews, without Judaism, without Zionism, without Jewishness.” The reality, more often, was to be regarded as a Jew among gentiles and a gentile among Jews.

In the novel The Ghost Writer he quoted one of his heroes, Franz Kafka: “We should only read those books that bite and sting us.”

For his critics, his books were to be repelled like a swarm of bees.

Feminists, Jews and one ex-wife attacked him in print, and sometimes in person.

Women in his books were at times little more than objects of desire and rage and The Village Voice once put his picture on its cover, condemning him as a misogynist.

A panel moderator berated him for his comic portrayals of Jews, asking Roth if he would have written the same books in Nazi Germany.

The Jewish scholar Gershom Scholem called Portnoy’s Complaint the “book for which all anti-Semites have been praying”.

When Roth won the Man Booker International Prize, in 2011, a judge resigned, alleging that the author suffered from terminal solipsism and went “on and on and on about the same subject in almost every single book”.

In Sabbath’s Theater, Roth imagines the inscription for his title character’s headstone: “Sodomist, Abuser of Women, Destroyer of Morals.”

Ex-wife Claire Bloom wrote a best-selling memoir, Leaving A Doll’s House, in which the actress remembered reading the manuscript of his novel Deception.

With horror, she discovered his characters included a boring middle-aged wife named Claire, married to an adulterous writer named Philip.

Bloom also described her ex-husband as cold, manipulative and unstable. (Although, alas, she still loved him). The book was published by Virago Press, whose founder, Carmen Callil, was the same judge who quit years later from the Booker committee.

Roth’s wars also originated from within. He survived a burst appendix in the late 1960s and near-suicidal depression in 1987. After the disappointing reaction to his 1993 novel, Operation Shylock, he fell again into severe depression and for years rarely communicated with the media.

For all the humour in his work — and, friends would say, in private life — jacket photos usually highlighted the author’s tense, dark-eyed glare.

In 2012, he announced that he had stopped writing fiction and would instead dedicate himself to helping biographer Blake Bailey complete his life story. By 2015, he had retired from public life altogether.

He never promised to be his readers’ friend; writing was its own reward, the narration of “life, in all its shameless impurity”.

Until his abrupt retirement, Roth was a dedicated, prolific author who often published a book a year and was generous to writers from other countries.

For years, he edited the Writers from the Other Europe series, in which authors from Eastern Europe received exposure to American readers; Milan Kundera was among the beneficiaries. Roth also helped bring a wider readership to the acclaimed Israeli writer Aharon Appelfeld.

Roth began his career in rebellion against the conformity of the 1950s and ended it in defence of the security of the 1940s; he was never warmer than when writing about his childhood, or more sorrowful, and enraged, than when narrating the shock of innocence lost.