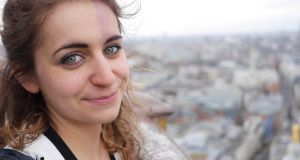 Anna Beecher: her evocation of grief is full of curiosity and a search for meaning.

The term “tear-jerking”gets overused in publicity for new novels but in the case of Anna Beecher’s incredibly moving debut, it is entirely appropriate. If you manage to get through Here Comes the Miracle without shedding a tear, beware the acknowledgments and its final, heart-breaking dedication to the author’s late brother.

Partly inspired by events in her own life, Beecher has written an original and powerful novel that looks to depict, in searing detail, the year from diagnosis to death of a terminal illness.

The character Joe is an emerging musician in his mid-20s, on the cusp of a successful career and poised to embrace his adult life, when he’s diagnosed with cancer. After some initial hope, the tumours spread and Joe and his family are left to deal with the reality that someone they love will die within a relatively short time.

This main story is narrated by Joe’s younger sister Emily, a college student who has always been close to her only sibling, with flashes of an omniscient narrator throughout that allow Beecher to do interesting things with time and space.

There are echoes of Kate Atkinson’s Life After Life and A God in Ruins, which seems fitting for a book preoccupied with the randomness of life and death. “What can be said about the peculiar lightness of having arrived in one life rather than another?” the omniscient voice asks, before Here Comes the Miracle hurtles back through the ages to give the story of Joe and Emily’s maternal grandparents, Edward and Eleanor.

For a relatively short book, it manages to thread the stories of the four characters in seamless fashion, fitting whole lives into short passages through superior details that stay with the reader. As with Atkinson, Beecher is interested in the choices people make and the emotions that prompt action, chief among them fear. This is most apparent with the story of Edward, a closet homosexual who chooses to marry a woman for fear of disappointing his family and society.

But as the narrator notes, “in a different story, Edward does call his sister…” and thus escapes to London to live, we imagine, a more authentic life. In these glimpses of what might have been, there is the great sadness of the life unlived.

Beecher, a Londoner currently doing an MFA at the University of Virginia, is a winner of the Henfield Prize for Fiction. Her debut recalls the lyrical exploration of loss in Max Porter’s Grief Is a Thing with Feathers, though structurally Here Comes the Miracle is less formally inventive. Kit de Waal’s The Trick to Time is another recent comparison, as is Sarah Winman’s Tin Man. How we’re shaped by the people we love is a central preoccupation of all these novels.

Beecher brings her own stamp to proceedings, with an evocation of grief that is full of curiosity and a search for meaning. The drastic toll of illness on the body – “your thin wrists, your new brittleness, tension glowing out from some unseen place” – combine with the ordinary realities faced by the patient: “You seemed thinner. I asked you about violin, but you said you had stopped playing. It hurt to hold it, chemotherapy heavy in your veins.”

Beecher also excels at showing the effects of the cancer diagnosis on family members: the grandfather who thinks it should be him instead; the mother who refuses to accept reality; the father who breaks down over the little things while trying to stay strong for his son; and the impact on Emily, whose college work and friendships start to suffer. This is most obvious in her relationship with her boyfriend Solomon: “When we watched television, his hand was heavy on my thigh and he began to kiss me on the forehead instead of the mouth, like I was six years old.”

The prose is clear but effective throughout, with many standout descriptions and analogies: “A puppy, born tiny and lifeless, can be put into the oven on a low heat, where it will lie on the shelf like a chicken breast. Just sometimes it will come to life.” As the time of death approaches and Joe is moved to a hospice, the language of the book mirrors the fragmentation: “So here we were in winter. The roads tight with frost.”

In the scenes in the hospice, the author gets us extraordinarily close: “My hair finer and lighter than yours, hanging very flat over my scalp. Grey-green eyes like your eyes. Thickness of your lashes. Your dead face loosening to reveal a stripe of eye white.”

Here Comes the Miracle may be a story about loss but it is also a testimony to life, survival and the revitalising powers of memory.