Orhan Pamuk’s new novel: a slow-moving drawl of a yarn 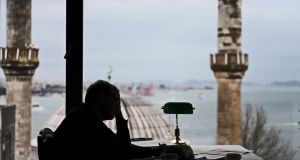 The Red-Haired Woman represents so poor an effort at stringing together a shambolic and pretentious narrative in which no one could possibly believe a word, that it appears to suggest that once you have won the Nobel Prize, which Pamuk did in 2006, that from then just about anything goes – and everything does exactly that in this slow-moving, repetitive drawl of a yarn, largely told by a smug narrator who brings self-absorption, along with purple prose, to new levels of irritation.

This subject has been explored many times in vastly superior works

In ways the narrator, Cem, who surprise-surprise, always wanted to be a writer, could as easily have wandered out of the pages of Spain’s ultra cool literary dilettante Javier Marías, although his sophisticated egomaniacs tend at very least to be marginally interesting.

In the bland, forgettable Cem, Pamuk, who has increasingly been a slave to digressions and over-writing, has a shaky structure upon which to hang his theme, fathers and sons, along with repeated riffs about the Oedipus complex in literature and art. Unfortunately for Pamuk, and even more tediously for the reader, this subject has been explored many times in vastly superior works.

Central to the serious problems besetting this novel – and the reader – is grasping why Pamuk chose to write it in the first person when he could, just possibly, have salvaged something had he instead chosen the detachment of either an omniscient narrator who could well have been as bemused as the rest of us, or at the very least he could have written it in a flat third-person voice and hoped for the best – which is to say a “best” which would have amounted to more than this self-regarding travesty.

By allowing the humourless Cem to tell his own story – itself a master class in whinging self-justification – all hope of credibility is effectively killed off within pages. Cem informs us that he is the handsome son of a handsome father, a serial charmer who runs a pharmacy. Dad has a habit of disappearing, he is involved in politics and as the novel is set in Turkey, well, one day he never returns. His disappearance leaves Cem and his mother destitute. Young Cem is already consolidating future greatness as a writer: he is working in a book store.

In order to fund his academic ambitions, Cem, then 16, accepts a job assisting a master well-digger. This character is named Mahmut and is another handsome, slim man, unmarried, obsessive, possibly insane. He certainly believes in digging for water in the dry dust which passes for earth outside Istanbul. The teenage boy is treated as if he were an infant. The prose is so cloying that it frequently becomes embarrassingly maudlin. Mahmut refers to Clem as “little gentleman”. For Clem the term confirms that the well-digger is acknowledging his social class. “He may have been teasing me for being too delicate for manual labour, but it made me glad to hear him call me ‘little gentleman’. Those two words told me that Master Mahmut knew my family was educated city folk, which meant he would look after me as a father and not burden me with heavier tasks. They made me feel that he cared about me and took an interest in my life.”

The boy often gazes at the night sky which inspires him to utter: “Did it seem right that, rather than reaching up toward the gleam of the stars, we had resolved to burrow into the ground on which we slept?” Cem does enjoy parading his philosophical streak. There is a charming sequence in which he recalls seeing shooting stars which for the well-digger is souls going to heaven.

The closing sequence narrated by the eponymous femme fatale provides the death knell to a weak, complacent and predictable soap opera

The relationship between the master and the teenager is affectionate if tense. Pamuk labours the father and son theme. But this is soon overtaken by Cem’s sighting of a beautiful red-haired woman. She notices him: “A melancholy smile formed on her perfectly curved lips, as if she’d seen something unusual in me…her smile unexpectedly sweet and tender.” The boy becomes obsessed with the woman, who belongs to a travelling acting troupe. He also basks in the fairy stories the well-digger tells him, something his own father never did.

Comparable to a long volley in a tennis game, the narrative slogs back and forth between father and son themes, and newly discovered obsessive sexual desire. Finally Cem succeeds in sneaking his way into seeing a performance. As expected his wildest fantasies are later fulfilled by the woman twice his age.

Back at the excavation site another predictable event occurs and throwing all plausibility to the winds, Pamuk’s narrator runs away. Even if the story were not so ridiculous, the prose is syrupy and clichéd. “A star was falling. I felt with every bit of me that the world before my eyes coincided perfectly with the world inside my head, and I focused intently on the summer sky. If only I could decipher the language of the stars, their disposition would surely reveal all the secrets of my life.”

On his return to Istanbul, Cem, whose behaviour defies comprehension, is reunited with his mother – “I could tell that he [his father] never called my mother. But why didn’t he call me?” – returns to working in the book store and eventually enters university. His life becomes a success: he marries a saint and builds a construction empire. Yet he is childless, unhappy and continues exploring the Oedipus myth. Pamuk, in fairness, is generous with art history and myth, only it is not enough to carry a melodrama. The closing sequence narrated by the eponymous femme fatale provides the death knell to a weak, complacent and predictable soap opera.

As long ago as 1997, Pamuk wrote The New Life, a better novel about obsession. He won the 2003 IMPAC Dublin Literary Award with My Name is Red, his finest novel to date, while both he and his translator Ekin Olap were far more successful with the rambling if likeable Dickensian romp, A Strangeness in My Mind (2015). Readers will be disappointed, while the cartoon dénouement, turgid prose, faux philosophy and banal dialogue will haunt Pamuk and, to a lesser extent Olap, for a long time to come.