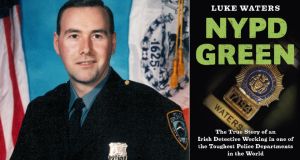 Luke Waters: portrays what it’s like being “on the job”. As well as describing the luck of being Irish in the NYPD, Waters describes the politics within the NYPD as well as the heartbreak and the frustrations 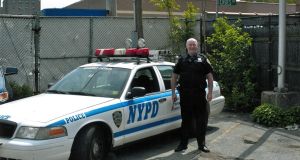 Luke Waters: worked mostly in Manhattan and the south Bronx before finishing his career deputised as a federal officer to work more closely with the FBI on organized crime. What makes the book interesting is the Irish-Irish angle as opposed to the Irish-American angle

Luke Waters from Finglas retired as a detective in 2013, not from the Garda Síochána, but from the New York City Police Department.

His first assignment was to the 17th Precinct in midtown Manhattan. While on his beat, an elderly lady approached him and told him that a dog was relieving himself in an unauthorised location. He remarked back to the lady, “Maybe Fluffy can’t read [the sign].” Unluckily for him (or luckily, as it turned out), it wasn’t just any old street and any old lady. It was the fabulously wealthy Sutton Place, the most exclusive address in North America, and she was Mrs Heinz, of ketchup fame. As a punishment, the rookie was transferred the next day, which he welcomed because he became a “real” NYPD cop.

Waters worked mostly in Manhattan and the south Bronx before finishing his career deputised as a federal officer to work more closely with the FBI on organized crime. What makes the book interesting is the Irish-Irish angle as opposed to the Irish-American angle.

Waters is “off the boat”, even though he stepped off a plane in New York. It is still the case, despite today’s more diverse membership of the NYPD, that being Irish does one no harm at all there. The Irish were the last ethnic group to form an association, the Emerald Society, within the NYPD in 1953, after the blacks, Italians, Jews, etc. had already done so. It wasn’t necessary. The police union, the PBA, was itself effectively the Irish association since it was founded in 1892.

He got his transfer to the Narcotics Squad thanks to his Irish rabbi, his mentor “on the job”. During the interview for the transfer, Waters tells us that there were two Irish brass flanking an Italian captain, who was giving Waters a very hard time about his record. When finally asked by the capitano if he had any questions, Waters asks him if he knows why Italy is shaped like a boot and not like a shoe. The capitano, wary and smelling a rat, takes the bait, anyway. “Because,” Waters replies, “you can shove a lot more shit into a boot than into a shoe, captain!” He got the transfer into the Narcotics Squad, which was the stepping stone to getting his gold shield, meaning promotion to detective.

Waters portrays what it’s like being “on the job”. As well as describing the luck of being Irish in the NYPD, Waters describes the politics within the NYPD as well as the heartbreak and the frustrations. The most harrowing must be the five-minute-old baby who was thrown out of the fifth-floor window by her terrified 14-year-old mother who had just carried the baby to term for nine months without anyone, family, friends or teachers suspecting anything.

He relates entering a high school in the Bronx – that had armed security guards and metal detectors – looking for a girl. She was a witness to a homicide faced with a terrible choice – testify and put herself and her family in mortal danger, or refuse to testify and wind up in jail and possibly be killed there. He recognises that the system had completely failed her.

The most interesting part of the book is his work as a “fed” where he is a handler of confidential informers, who can earn a thousand dollars a week, tax free. “Crime may pay,” Waters says, “but preventing it does, too.” He makes the point there that some people on the wrong side of the law, had they been given a break here and there, could have would up as policemen. I got the same impression working as a lawyer in Dublin during the 1990s. I was convinced, and I often reflected on it, that many of the men whom I was defending in Dublin, had their parents emigrated to New York 30 years before, would have had good, steady jobs in the civil service or with the utilities there and never darkened the door of a prison. It was so obvious to me that poverty in Ireland had turned them into criminals while the opportunities that New York had offered turned their cousins into law-abiding citizens.

Waters relates being detailed to protect City Hall during the protests in the wake of the Abner Louima scandal in 1997 where a Haitian immigrant was tortured, severely beaten and sodomised with a broom handle. Five officers were eventually disciplined or prosecuted, with sentences of up to 30 years in prison with no possibility of parole. Police officers at first said that his injuries were due to “abnormal sexual practices”. Louima was later awarded $8.75 million in compensation.

Waters recounts his “total shock that something like this could happen to someone in police custody” and rightly condemns the atrocity, as he calls it. But this total shock seems disingenuous as he fails to deal with, or attempt to explore, the cause of police crimes such as this, which are similar to the recent spate of killings of black men by police in the United States and have been going on for decades. The cause of crimes like these is clearly racism. While it is true that crimes like these are also committed by white policemen against white men, they are overwhelmingly committed by white policemen against black and Hispanic men.

In my opinion this is the problem with the book, as is the case with many such autobiographies published in the United States. Waters does not deal with the racism of white police officers. The word racism or racist does not appear in it, even once. Failing to deal with racism in a book about your 20-year career in the NYPD is like describing the St Patrick’s Day parade in New York City without mentioning the colour green.

I graduated from high school in Brooklyn in 1966. At least eight of my classmates in that graduating class alone became NYPD policemen. I knew at least 30 more from my neighbourhood, family and friends. If there was a thread running through the majority of them, it was racism. One of them, now deceased, told me more than once, in the presence of at least one other policeman who seemed to look on approvingly, that he became a policeman “to beat up niggers”. The majority of them, but not all, would not have demurred with that statement.

Another policeman whom I knew boasted (not to me) that he was once on the roof with a black man and had, with his service revolver, kept backing him up till the man fell off the roof and died. I do not know if this is true, but the fact that the policeman would boast about it (or perhaps even invent the entire story) indicates the mindset of certain policemen during that era. The recent spate of killings in the US indicates that this mind set continues apace.

To a certain degree, Waters breaks the code of omerta among police officers. He names a detective who sleeps on the job and another who takes advantage of the overtime provisions. (The latter is probably not unique to the NYPD!).

The author, now retired in Co Cavan with his family. has written an interesting book of this genre and writes in a racy and pacey style in “cop lingo” replete with rabbis, collars, juice, skels, perps, crackheads and Lous. Much of the dialogue is set out in the local phonetic vernacular with expletives not deleted. The only “mistake” that my New York ear caught was when he stated that a fellow officer was raised “in” Long Island, instead of “on” Long Island. But otherwise, the lingo is NY perfect.

Frank MacGabhann is a lawyer and commentator