Notes on Suicide by Simon Critchley review: a fascinating and personal treatise

This intense book eloquently makes the case for suicide not as an act to be pitilessly condemned, but a possibility for which any of us might be thankful, says Rob Doyle 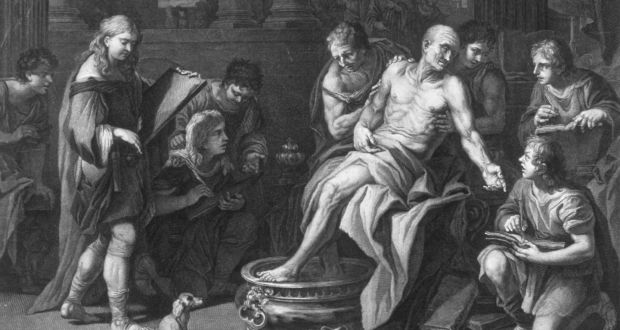 The suicide of Stoic Roman philosopher, dramatist and statesman Seneca the Younger, who was ordered to kill himself by Nero, and counselled that a wise person “lives as long as he ought, not as long as he can”. Photograph: Mansell/Time Life Pictures/Getty Images

“This book is not a suicide note,” declares philosopher Simon Critchley at the outset of his short, fascinating treatise on suicide. The disclaimer seems gratuitous until, a few pages in, we realise we are entering a zone of personal intensity remote from the aridities of academic philosophy.

“My life has dissolved over the past year or so,” Critchley confesses. “For the first time in my life I have found myself genuinely struggling with thoughts of suicide… motivated by self-pity, self-loathing, and revenge.” Clearly, the stakes have just been raised.

According to Critchley, the very proximity of suicide, its constant accessibility to each of us, effects a cognitive scrambling: we are unable to think clearly on the subject. “What we are facing here is a massive social, psychical and existential blockage,” he claims. He denounces the view that self-killing is a moral or legal offence. The profundity and seriousness of the question of suicide are such that “we desperately need a more grown-up, forgiving and reflective discussion of the topic”.

In an effort to overcome our skewed thinking about suicide, Critchley conducts a survey of philosophical and social attitudes towards it. The belief that suicide is sinful persists into secular modernity, yet its origins are to be found in Christian theology. The religion’s “implicit moral judgement on suicide… remains intact and in force”.

The rise of the Christian faith supplanted suicide’s “partial acceptance in antiquity”. The Stoic Seneca, who was ordered to kill himself by Nero, counselled that a wise person “lives as long as he ought, not as long as he can”. The Christian prohibition on suicide was formulated by Augustine and later refined by Thomas Aquinas, who declared that life is God-given and that we have the right of usage over it, but not that of governance.

In the Middle Ages, these theological principles were applied as harsh legal punishments on the surviving family, property, burial rights and even corpse of those who took their own life. It was not until David Hume, in his posthumously published treatise Of Suicide (included here as an afterword), a text which Critchley describes as still having “the capacity to shock”, that the Christian doctrine was challenged. Hume’s most provocative point is also a beautiful one: suicide can in some cases be considered a social good, in that by taking one’s life, one sets a liberating example to others who are suffering intolerable agony, demonstrating that they too can get out any time.

The idea that the possibility of suicide paradoxically enables us to live on occurred also to Friedrich Nietzsche, who wrote: “The thought of suicide is a great consolation: by means of it one gets through many a bad night.” When Critchley quotes the poet John Donne, the effect is not gloomy but comforting: “methinks I have the Keys of the Prison in mine own hand, and no Remedy presents itself so soon to my Heart as my sword”. Even if, as the nihilist philosopher EM Cioran insists, “we are all deep in a hell”, it is one with an escape hatch.

Hume’s radical ideas were taken up by the now forgotten free-thinker Radicati in the eighteenth century: he asserted that human beings are “free to choose their own death”. Radicati died in destitution after being incarcerated in punishment for his “most impious and immoral book”. Taking up from these forerunners, Critchley persuasively dismantles arguments for the immorality of suicide based on the notion of “the sanctity of life”, and likewise refutes claims about suicide’s moral status which appeal to “rights and duties”.

In New York in 2013, Critchley had the startling idea of leading a creative writing workshop dedicated to the suicide note. Such notes, he tells us, emerged in eighteenth-century England, propelled by rising literacy. He examines specimens penned by the famous and the unknown, ranging in tone from the wrenching to the peculiar, some of which invite his “quiet admiration”. Suicide is considered as an act of “publicity”. Almost all those who throw themselves off the Golden Gate Bridge, Critchley points out, do so while facing San Francisco, rather than the expanse of the Pacific – suicide is communicative. Freud’s classic paper, Mourning and Melancholia, is mined for its groundbreaking analysis of how, in severe depression, the ego makes of itself an object, and unleashes the fury of its sadistic drives against itself.

The final section is the weakest. Critchley is sceptical of Albert Camus’s insistence that “absurd creation” is the only valid response to the “indifference” of the universe. Oddly, he turns to EM Cioran’s provocative views on suicide, only to wrap things up in an ameliorationist manner that veers close to the philosophy-as-self-help approach of Alain de Botton.

“Each of us has the power to kill ourselves, but why not choose instead to give oneself to another or others in an act of love,” he asks, rather limply. Critchley finds relief from his personal crisis by an appeal to the ecstasy of the moment, an apprehension of the beauty of the world. Well and good, but the ecstatic moment is notoriously fickle, and looks pretty flimsy in the face of what Kay Redfield Jamison, in An Unquiet Mind, describes as the “state of cold, agitated horror and relentless despair” of suicidal depression.

Nonetheless, this intense book is an instance of thought born in the hour of anguish, which eloquently makes the case for suicide not as an act to be pitilessly condemned, but a possibility for which any of us might be thankful.

Rob Doyle’s second book, This Is the Ritual, was published in January by Bloomsbury and the Lilliput Press