Sinéad Gleeson, editor of The Long Gaze Back: An Anthology of Irish Women Writers, pays tribute to one of its authors, a forgotten outsider in the canon of Irish writing 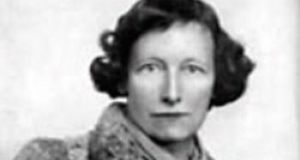 At this year’s Bord Gáis Energy Irish Book Awards, JP Donleavy received a deserved Lifetime Achievement Award. His seminal novel, The Ginger Man, was published (and subsequently banned) in 1955. Across the room of award tables sat Edna O’Brien, nominated for Irish Novel of the Year. In 1960, five years after Donleavy, O’Brien’s The Country Girls was banned too.

The Long Gaze Back: An Anthology of Irish Women Writers, which I edited, was Best Irish Published Book and I thought of two of its contributors, Kate O’Brien and Norah Hoult, who were also chastised under the Censorship of Publications Act. Hoult is one of Ireland’s most censored authors, and had twice as many books (10) banned as Edna O’Brien. While O’Brien and her work still thrive, Hoult remains a forgotten outsider in the canon of Irish writing.

Born in Dublin in 1898, Hoult was an occasional journalist who wrote 25 novels and four short story collections. Despite this, her in-print work is hard to find, but London’s Persephone books published her novel There Were No Windows in 2005. Persephone is devoted to resurrecting forgotten women writers and owner Nicola Beauman is proud to publish Hoult’s work. “Norah is a very good example of a woman writer who falls completely out of fashion and is forgotten. She was an absolutely brilliant writer and well-known at the time in a way she isn’t now.”

Beauman’s words struck me because when we met, I was in the middle of editing The Long Gaze Back. In putting together the 30 stories, I knew I wanted to include deceased writers. I first encountered Hoult’s work in an all-female Irish anthology, Cutting the Night in Two, edited by Evelyn Conlon and Hans-Christian Oeser.

Without it, I would not have realised the extent of Hoult’s work, or her incisive way of writing about women’s lives. Heather Ingman in Irish Women’s Fiction: From Edgeworth to Enright says Hoult “employed the popular novel for feminist protest”.

So who was Norah Hoult? All I had was the work itself and reams of notes. Photos of her are scarce, and in my head, she consisted solely of words she left behind and someone long overlooked by the literary world. When I began to have conversations online about this book, a friend got in touch to say his mother knew Norah. Would she talk to me about her? Sure.

Nuala Nally got to know Norah when she lived in a cottage in Blacklion, Greystones. “I called on her every two weeks over a period of three to four years. She never mentioned that she was a writer at all, but I knew. We’d go for a drink – she loved whiskey – but was banned from a couple of pubs because she was outspoken and rowdy. She was also an inveterate smoker, and smoked in bed so her blankets were full of cigarette burns. The cottage was pretty but old-fashioned, and overrun with mice. Once she offered me a biscuit with my tea, and there was dead mouse in the tin. Without flinching she said, ‘Oh, I think rigor mortis’”.

Norah counted James Stephens and Oliver St John Gogarty among her friends, and apparently Yeats, upon seeing her at a party asked someone “who is the woman with fine eyes?” She was briefly married but upon realising she was expected to cook and do domestic chores, walked away. ‘When Miss Coles Made the Tea’, her story in The Long Gaze Back, deals with class, disability, office politics and working women’s lives. It’s an exquisite story. Anthologies are a place of discovery: of finding writers – like Hoult – who have been long consigned to the back shelves, but deserve a new generation of readers.