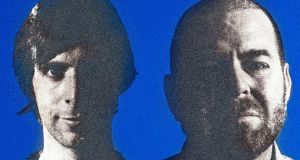 A group of emerging Irish filmmakers has completed production on a modern re telling of the classic James Joyce story, Two Gallants. The short film features an unreleased song Where Are We Here? composed, produced and performed by Brian Fast Leiser of the Fun Lovin’ Criminals. The film’s completion coincides with the centenary of the Dubliners book on which the film is based. The film will now be submitted to film festivals internationally.

The film focuses on the tenuous relationship of two con men and the fear Lenehan has that his friend Corley may desert him for his new female companion. Recession-hit Dublin is portrayed visually as a city where each individual is trying to get ahead of one another. The film addresses themes of capitalism, emigration and homelessness while still remaining true to its heist story origins.

Filming took place in Artane, Swords, Dún Laoghaire and at a variety of locations in Dublin’s city centre including Oil Can Harry’s pub and the Portobello Hotel.

The screenplay was written by Irish actor Carl Finnegan and Darren McGrath. Finnegan also directed and executive produced the film. “This film will I hope showcase new Irish filmmaking talent and introduce a new generation to James Joyce. I’m overwhelmed by the support we have recieved from my home town of Limerick and our local community here in Dublin as well as James Joyce fans Internationally” said Finnegan, one of the founders of the production company Rose-Finn Films.

For further information on the production, please contact dublinerfilm@gmail.com @TwoGallantsFilm