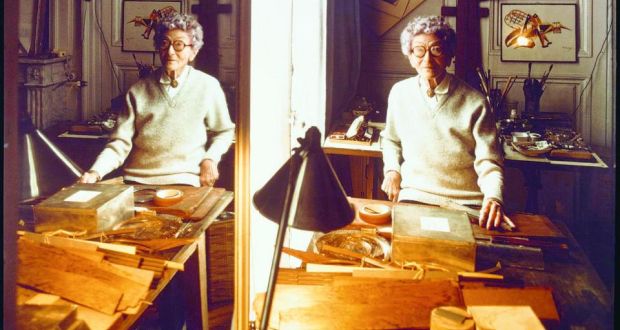 Eileen Gray: convincingly depicted in Patricia O’Reilly’s re-creation of an interview between the Irish modernist designer and the British journalist Bruce Chatwin.

Fictionalising real people is tricky. An author no longer has free rein with characters. When information exists in the public domain readers will often come armed with expectations. The line between biography and literature blurs. Facts are manipulated, scenes rewritten, voices reconstructed.

Patricia O’Reilly’s fifth novel re-creates an interview between the Irish modernist designer Eileen Gray and the British journalist Bruce Chatwin, in the designer’s Paris apartment, in 1972.

The Interview (New Island, €13.99) uses a third-person omniscient voice that at times reads like biography, with passages that are informative and authorial in tone. Although the novel’s omniscient perspective flits between the thoughts of minor characters – maids, Gray’s father – it is predominantly split between the book’s two main characters, Gray and Chatwin.

The real Chatwin led an at times remarkable life. One of the first prominent British figures to die from Aids, in the late 1980s, he lived both within and on the fringes of conservative society. Married and bisexual, Chatwin quit his job as a Sunday Times journalist with a telegram from Argentina: “Have gone to Patagonia.”

He went on to write fiction, winning the James Tait Black Memorial Prize for On the Black Hill. His funeral made headlines when the fatwa was proclaimed on Salman Rushdie while he was attending the service.

These aspects of Chatwin’s life are not made clear in the novel. As interviewer he is there as a mouthpiece for Gray, asking the questions that will reveal her story. It makes Chatwin seem shadowy.

Mysterious narrators
This is not problematic in itself. Literature is full of mysterious narrators who suppress their stories in order to tell better ones. But Chatwin’s story is not hidden. We are given continuous access to his thoughts and background. As a character he is not developed enough for us to care about these snippets.

Compared with Gray, whose narrative is vibrant and compelling, the fictionalised Chatwin does not seem important enough to warrant the back and forth into his inner thoughts. His musings on his grandmother, for example, while tenuously linked to Gray, appear arbitrary. Elsewhere his repetitions grate, as with his fears over the interview. Switching to his perspective distracts from the real story, or at least the most interesting story, which belongs to Gray.

The purpose of giving Chatwin’s perspective is to show the parallels between his search for a creative outlet and the journey Gray undertook to discover the same. They agree on many things – the life-affirming powers of art, the importance of travel, the need for privacy in certain matters – and a connection forms between them. As suspense builds about whether Chatwin will get his interview, this connection proves vital. It is a kind of faux suspense, given the story’s basis in reality. For readers unaware of this reality, the back cover reveals the outcome.

It is testimony, then, to how fascinating and well rendered Gray is that she holds our interest despite this. O’Reilly unlocks the enigmatic artist by reimagining her life, allowing Gray to narrate her story. We meet her first as a nonagenarian recluse, unsure whether to allow Chatwin’s questions into her home.

Permission wavers throughout the novel but is ultimately granted. O’Reilly brings the reader on a journey through Gray’s life, from the tomboy growing up on an Irish country estate to the devastation when her father walked out on the family, to the pioneering young artist she became, delighting 1920s London and Paris.

A portrait of a passionate and diligent woman emerges: the persistence with which Gray returns to a lacquering shop to gain apprenticeship in her beloved medium; the meticulous planning of E1027, her modernist villa on the Côte d’Azur.

Gray’s ambiguity is convincingly depicted: shy and conservative despite ground-breaking achievements and a tumultuous personal life. Her relationships with the French singer Damia and the architect Jean Badovici are handled sensitively and give insight into the loneliness and loss that are often the price of creative genius.

For the most part Gray’s is a captivating voice. It wavers when she switches to the present to give her views on Chatwin. “The timing of Bruce Chatwin’s questions is impeccable.” These repeated interjections stretch credibility when uttered by Gray and become tiresome over the course of the novel, taking us away from the fascinating story at its heart.

Steve Wall on his family’s tragedy: ‘It was a year from hell’