Plus new thrills from Andrew Martin, Rachel Ryan, Will Dean and Patricia Highsmith 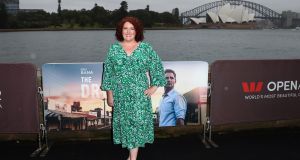 ‘Jane Harper’s new novel The Survivors exhibits all the qualities that make her such a compelling writer.’ Photograph: Brendon Thorne/Getty Images

“It wasn’t fair to say Evelyn Bay was a place where nothing ever happened – things did, of course; ask anyone who had been there for the storm. But not often, and not whatever this was.”

This was the death by drowning of Bronte, an art student from Canberra who stays in the out of season Tasmania resort town to work on a project and waitress at the Surf and Turf. The storm is what Kieran Elliot, returned from Sydney with partner, Mia, and baby to see his ageing parents, cannot forget: the day his brother and a friend drowned, deaths for which many in the town think Kieran bears culpability; the day his girlfriend’s younger sister disappeared. As questions begin to be asked about the behaviour of Kieran’s friends Ash and Sean, and of his dementia afflicted father, Brian, the investigation inevitably takes on a retrospective focus.

8 Frost dispenses with the manual of diplomacy for NI protocol

17 What a work-from-home space should cost: Converted attic, garden office or spare room

18 New to the Parish: Abdullah Afghan and Fatima Abdullah arrived from Afghanistan via Pakistan

21 Miriam Lord: The Bisto Kids get a taste of their own Davy gravy

26 Long Covid in children: New data is cause for concern, scientists say

31 Clench your glutes, pick up marbles with your toes and six other easy ways to keep fit

37 I, Tonya reveals a deeper truth than Harding’s level of guilt

38 Home office, home bar and scope for another home alongside for €1.55m